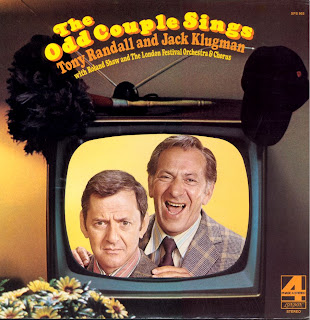 The world of bad music is littered with TV and film actors and actresses exercising their vocal cords. Alright, I know in this PC world they all prefer to be known as actors, as if the profession were entirely sexless which, after listening to the following, you might hope is true. After all - would you want these two fathering anyone?

Yes, it's true. Jack Klugman (star of many a Twilight Zone episode and, of course, Quince ME) and Tony Randall (who we'll come to again at a later date for his crimes against the Beatles), stars of the TV version of the Odd Couple, released an album.

Don't get me wrong; I don't mean it's a mediocre mangling of a few popular songs, this stunning album features some of the worst performances I've ever come across, masquerading as 'comedy' no doubt. The mis-matched pair must have been under the influence of something when they agreed to record this embarrassment - either money or their own egos.

Released in 1973 on London Records in the US, thirteen years later Klugman went on record to say: "Now Tony can sing, but I have a voice like a loud snore." Sorry Jack, but your friend was little better. For your delectation, here is their interpretation of the Carly Simon classic You're so Vain. 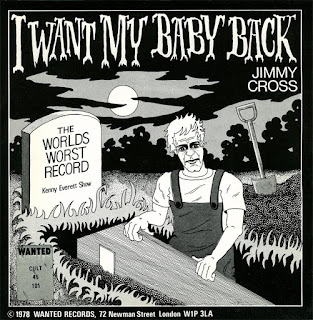 The title kind of says it all. I've been fascinated with bad music for decades, those cringe-inducing sounds so beloved of the old Kenny Everett and Dr Demento radio shows: Jimmy Cross's I Want My Baby Back; Jess Conrad; Mrs Miller; terrible novelty songs and pretty much anything ever recorded by Brigitte Bardot. That sort of thing.

They call it 'outsider music' in the US: most people just call it crap. Think of it as the aural equivalent of watching a car crash.

Over the years I've collected hundreds of 7", EPs LPs, CDs and, more recently, MP3s of these crimes against music. The internet has been an incredible boon, littered with obscurities, oddities and downright awful sounds, and it's my intention over the coming weeks, months or years (or however long it takes me to get bored of this) to post some of those tunes, or links to other sites hosting them, here along with - when available - artwork and background information.

First up is the aformentioned I Want My Baby Back, a minor hit in the US in 1965 for Jimmy Cross, based in no small part of the Shangri-Las 'Leader of the Pack', reissued in the late 70s on 7" and on the compilation album The World's Worst Record Show in the UK .
Hope you enjoy the ride.