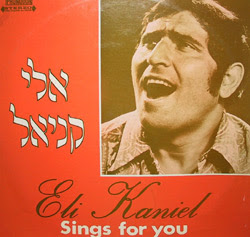 I've not been able to find out much about Eli Kaniel, apart from the fact that he's still recording (his most recent album, You, is available from http://www.israel-music.com/eli_kaniel/) and seems to have had a reasonably successful career in the Hebrew-speaking world over the last 30 or so years.

This little gem was another 'net find, although I have since seen copies of this particular album (apparently pressed in Italy!) on sale for around the $18 mark. A trawl of the interweb has revealed little other information about the great man, other than he's probably better known as a composer, penning the music to a number of Hebraic hits, such as Yesh Eyr (There is a City) and writing the score to the 1980 movie Kohav Hashahar (Morning Star).

He's not a great singer - the title track of his most recent album has been put through a vocoder or auto-tune (a la Cher) - but what does that matter? Perhaps in his native language he's a bit more palatable, but English is clearly a struggle for him. Still, he does his best, and thank the lord for that otherwise we would not have this nugget.

Judge for yourself as we present, in his own inimitable style, Eli's version of that old chestnut The Impossible Dream:

Posted by Darryl W. Bullock at 11:13 No comments: Links to this post 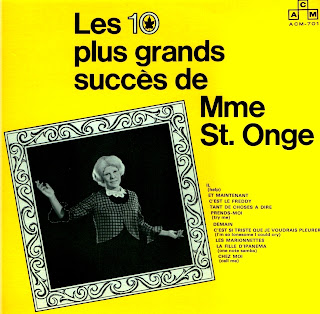 There's a thin line, as anyone with an interest in bad records will know, between the truly awful and the trite; between recordings so bad that they are good and novelty songs purpose-built to be bad.


This could well be one of the latter, but I'm prepared to make an exception, because this is exceptional. I discovered the delights of Madame St Onge whilst on one of my regular visits to WMFU (http://blog.wfmu.org/), an essential resource for lovers of the perverse.

Think a French-Canadian version of the awesome Elva Miller (http://www.mrsmillersworld.com/). Mme St Onge bleats and brays her way through ten belters, many of them cover versions of popular hits. The Rolling Stones' Time is on my Side is rendered with wonderful, tuneless gusto; The Beatles' Help (translated as Il) is simply dreadful, but the real highlights are Prendes Moi (Try Me) - just listen to what happens 30 seconds in and if that doesn't sell you on the talents of Mme St Onge nothing will - and the other track here (yes, you lucky people you get two cuts today, I could not keep this gem to myself) Et Maintenant.

Recorded, one would assume, at some point around 1966/67 (judging by the material and the sound of the beat group backing her on the album), apparently Mme St Onge had a proper singing career in earlier times. Her real name was Francine Laplante, although she also recorded a couple of singles under the name of Maryse Marshall. I've not been able to find any evidence of these recordings yet, but I'm still looking!. Unfortunately Francine passed away earlier this year, but at least she left the world with this treasure, Les 10 Plus Grands Succes de Mme St Onge. 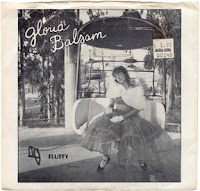 I first discovered the audio delight that is Gloria Balsam's Fluffy almost 25 years ago, courtesy of Rhino Record's 1983 release The World's Worst Records. See the theme here? This album and 1985's Volume Two were mostly made up of novelty and comedy tacks from Rhino's own releases, but just occasionally they threw up a real pip.

Such as this. A gem from 1979, with Gloria ably assisted by backing from a band called the Psychotic Pineapple, the B-side is a rather odd new wave version of the Frank Sinatra standard High Hopes. Fluffy tells the story of a poor, abandoned dog who Gloria befriends. Sung in wonderfully off-key tones, you have to wonder if this was a serious recording or was indeed supposed to be a joke. It's hard to be certain, but who cares? It's awesome!

Born Cynthia Frantz in Philadelphia, Gloria gravitated towards San Francisco, becoming friends with many members of the local new wave scene, supporting acts such as the Dead Kennedys and Devo and doing the occasional cabaret spot before cutting this, her only single, for Richmond Records. Initially only 1,000 copies of Fluffy were pressed but, thanks to that Rhino compilation, it lives on.

You can learn more about Gloria Balsam here: http://www.chocstar.freeserve.co.uk/gloria_balsam.htm

Posted by Darryl W. Bullock at 12:19 6 comments: Links to this post