CB or not CB, that is the question 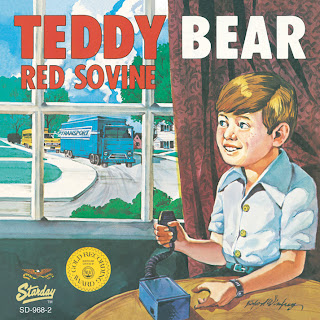 Sorry it's been a while - some of us have a life too you know - but I could not let 2007 pass without at least one more post.
Woodrow Wilson 'Red' Sovine (1918-1980) was well known in the States for his narrative-style country and western paeans, but in the UK is only known for this, his posthumous hit Teddy Bear.
A mawkish tale of a crippled, fatherless child whose only contact with the outside world is his late daddy's ham radio, it was a huge hit in the US in 1976: a country number 1 and a Billboard top 40 success selling over 1 million copies. Released in the UK after Sovine's death (he had a heart attack at the wheel of his van) it even reached the top five here, supported by the brief interest in CB radio on these shores.
Teddy Bear has everything a great bad record should have: a ridiculous story full of crippled children and death, spoken rather than sung, bad country noodling and an awful, serious as-all-getup delivery. It's I Want My Baby Back without the sense of humour and the best argument against country and western music ever.
Enjoy, and have a happy New Year. See you in 2008.
http://rapidshare.com/files/80293218/Red_Sovine_-_Teddy_Bear.mp3.html
Posted by Darryl W. Bullock at 12:58 No comments: