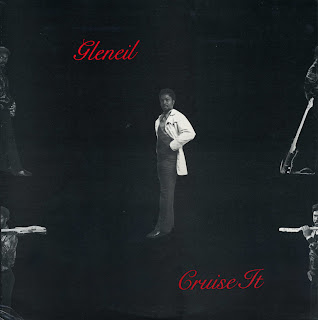 An exhaustive (well, five minute) search of the web has provided little information about this utterly awesome recording, but what I have found I shall share.

Gleniel, aka Gleniel Roseman, released his peculiar album Cruise It in 1985 on GRM Records, and from that album we bring you the truly wierd Cheapy Chappy and Ito. Other standout tracks include the utterly bizarre instrumental Rockin' Chips (which you can find in real audio at www.wfmu.org/playlists/shows/13647) but it was not his only release. Oh no. There's apparently a second album, Soothing. Something Gleneil's music is anything but!

Odd is not the word. Think Alvin and the Chipmunks doing saturday night cabaret at a working men's club in the North of England, and you may be somewhere close. His drummer drops the beat, keyboards are reminiscent of Stephan Remmler's Casio noodling on the first two Trio albums, and Gleneil's voice sounds like he's just ingested a quart of helium. Anyone who has the patience to try and work out the entire lyrics gets a doughnut.