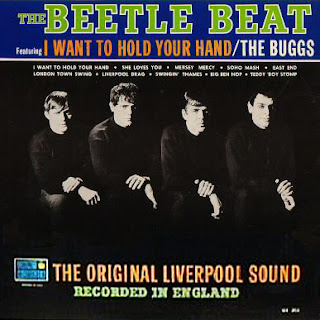 In 1964 the Beatles invaded America, and music was never the same again. Fact. But in the year before I want to Hold your Hand raced to the top spot of the US charts, the lads struggled to crack the States, releasing a slew of singles and albums on obscure imprints as Capitol, their US distributor, refused to publish their recordings. The idiots. Within weeks of their breakthrough hit and their legendary appearance on the Ed Sullivan Show, they had the top five spots in the US singles charts. Beatlemania had arrived.
In the wake of that breakthrough dozens upon dozens of US companies tried to catch in on the demand for all things Beatle, releasing albums and singles by now long-forgotten bands who vaguely looked or sounded like the real thing. Parents giving in to their kid's incessant cries for new Beatles records would come hme with these dreadful records, disappointing their children and filling the recod bins at thrift stores for decades to come.
Pretty much all of these albums are terrible, but some stand head and shoulders above the others - either for their sheer ineptitude or their sheer cheek. Over the coming months I'll share a few of my favourites with you, but for now wallow in the mire created by The Buggs' Original Liverpool Sound. Yeah, right: the group came from from Nebraska and the album was recorded in Minneapolis!
Many of these albums feature just one Beatle song, padding out their half hour with a bunch of soundalike tracks and/or instrumentals. The cheek of this particular prize is that although it features mediocre covers of I Want To Hold Your Hand and She Loves You, the rest of the album consists of Beatle-esque rip offs one of which, Liverpool Drag, is such an obvious steal from I want To Hold Your Hand that it's beyond belief that they were never sued by Northern Songs or Maclen, Lennon and McCartney's publishers.
Here, for your delectation, are the notes from the back cover, complete with spelling mistooks:
"England has invaded America! From the banks of the Mersey River, by Liverpool, England a new sound, a new beat, has gained tremendous popular acceptance. The Mersey Beat! The Liverpool Sound! Remember these names for a new trend in popular music has arrived. The year of Beetlemania. The Mersey Beat features a strong guitar rhythm attack backed with a solid beat producing a driving, stomping, rock and rolling tempo. The Kings of the Mersey Beat to date are The Beatles, followed by Billy J. Kramer and The Dakotas and Jerry And The Pacemakers. In this album you will hear the original Liverpool sound recorded on location in England by The Buggs, a fast moving, well paced group that we are sure you will like."
And here we present Liverpool Drag: