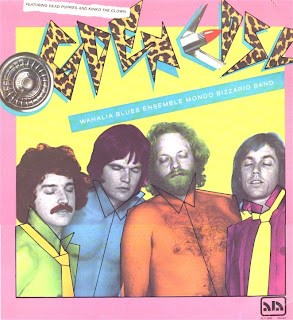 I make no excuse for presenting a novelty record rather than a bad record per se, as the delight submitted for your approval today deserves recognition as one of the most tasteless pieces of 'music' ever comitted to vinyl.

Kinko the Clown is the heartwarming story of a children's party clown who is infact a kiddy-fiddler (and quite likely a child killer too). Hurrah!

The Ogden Edsl Wahalia Blues Ensemble Mondo Bizzario Band, from Omaha, Nebraska, existed on and off from 1970 to 1983. Essentially made up of Bill Frenzer and Bill Carey, with heavy early input from Otis XII and Jim Celer, the band's typical show featured up to 10 people on stage performing a mix of comedy sketches, musical satire and parody.

In 1976 they released their only original LP, Stuffed, on the Sunburn label. The song Dead Puppies, taken from the album, was a longtime Most Requested on the Dr. Demento radio show. Shortly afterwards the group moved to Los Angeles, working on TV, radio and in live performances. In 1979 they reissued Stuffed, this time as simply Ogden Edsl, adding two new songs, Daddy's Money and Kinko The Clown, although the group ran into trouble as quick-print service Kinko's and the widow of a real Kinko the Clown threatened to sue. Kinko quickly became a firm favourite on the Dr Demento Show and later turned up on the Rhino Compilation The World's Worst Records. The second version of Stuffed reappeared in 1985 as Ogden Edsl Wahalia Blues Ensemble Mondo Bizzario Band Featuring Dead Puppies and Kinko the Clown on ALA Records (pictured here), but by this time the band had already gone their separate ways.

In October 2001 the band reunited for a one-off performance at the Ranch Bowl in Omaha, Nebraska before a hometown crowd to be inducted into the Nebraska Music Hall of Fame. 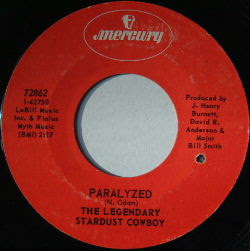 One of the absolute classics of the genre, and one which no self-respecting lover of bad records should be without.

The Legendary Stardust Cowboy was born Norman Odam in Lubbock, Texas in 1947. This unassuming chap was bitten by the music bug at an early age, performing locally at high school hops and talent shows.

Before one such show he paid for a few hours of studio time and recorded the song for which he will be forever famous: Paralyzed. Only 500 copies of the disc, with T-Bone Burnett on drums, were pressed initially, but it brought the Legendary Stardust Cowboy to the attention of the producers of the 60s TV show Laugh In. His odd collection of whoops, howls and yelps, alongside the insane drumming and franky bizarre trumpet solo was an instant hit, and his recording was soon picked up and reissued by Mercury.

Subsequent releases (including I Took A Trip - see below - and My Underwear Froze to the Clothesline) failed to recapture the distinct oddness of Paralyzed, and Ledge's star soon faded. Little more would be heard of him for over a decade, until he was brought back to prominence by Rhino Records and the Dr Demento radio show. The appearance of Paralyzed on Kenny Everett's Worlds worst records compilation lead to a contract with Big Beat records in the UK and a fairly awful album, Rock-It to Stardom.

He still gigs sporadically to this day. David Bowie is a huge fan: Ziggy Stardust was (apparently) named after the Ledge; Bowie recorded a version of Ledge's I Took a Trip on a Gemini Spaceship for his excellent Heathen album and they've even appeared in concert together.

For more info on the Legendary Stardust Cowboy, check out www.stardustcowboy.com