The Girl of Straw 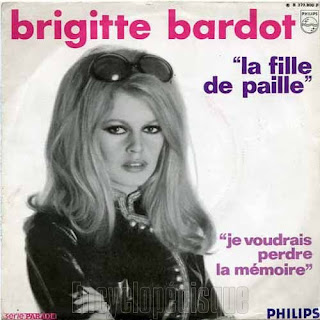 Brigitte Bardot may be as mad as cheese these days (and a little bit of a racist to boot), but during the 60s she made some excellent yeye records - a kind of French take on the British pop phenomenon - before getting together with Serge Gainsbourg to produce some truly weird and wonderful psychedelic offerings such as the mad Harley Davidson, the druggy Bonnie and Clyde and the simply peculiar Comic Strip (Kapow! Pop! Wizz!).

Even though she was involved with a slew of great recordings, you have to admit that her voice was, to be polite, a little weak, and the poor girl often found it hard to carry a tune. Which is why although I love many of her records I feel justified in presenting this one for you, the downright dreadful 1968 single La Fille de Paille, or The Girl of Straw.

It's terrible! From the opening 'peep peep peep' backing chorus through to her inept, out of tune chundering, just about the only thing that redeems this dreadful recording is the bouncy tune and her incessant giggling. She must have known that she was on a loser here; the lyrics make little or no sense in any language (something about a girl made of straw blowing away in the breeze, catching on fire and having, in place of a heart, what Babel Fish translates as 'a large pawn mocker'!) and the performance is half hearted at best.

Still, at least it isn't Madame St Onge! There's a reasonably good clip of her, up to her neck in a haystack and miming (badly) to this from the Sacha Distel Show doing the rounds of the internet. A much better quality one than that found on You Tube is at http://www.dailymotion.com/
Enjoy, and seek out some of her other (better) recordings.
http://rapidshare.com/files/118033948/17_La_Fille_De_Paille.mp3.html
Posted by Darryl W. Bullock at 15:37 No comments: Links to this post