Are you ready Boots? 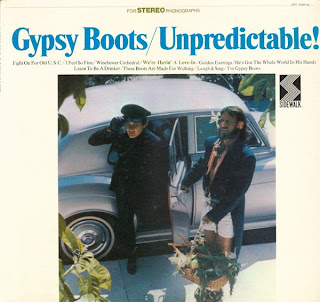 There have been some truly appalling versions of the 60s Lee Hazlewood classic These Boots Are Made For Walkin' over the decades - those by the late Paula Yates, David Hasslehoff (yes, really) and the wonderful, oft seen star of this very blog Mrs Miller come immediately to mind - and today I'd like to add to that eclectic selection by presenting you the version recorded in 1968 by Gypsy Boots.

Robert 'Gypsy Boots' Bootzin was a US fitness pioneer, credited introducing mainstream America to alternative lifestyles such as yoga and poularising organic food.

San Francisco resident Bootzin, along with a dozen or so other 'tribesmen', lived off the land, slept in caves and trees, and bathed in waterfalls. Known locally as Nature Boy, he was the inspiration for the 1948 Nat King Cole hit of the same name (later covered by George Benson among others), which was written by fellow 'tribesman', Eden Ahbez (more about him in a later instalment!).

Gaining national exposure in the 1950s through TV shows such as the Groucho Marx's You Bet Your Life and the Steve Allen Show, he began to capitalise on his celebrity, issuing the books Barefeet and Good Things to Eat and the autobiographical The Gypsy in Me. He opened one of the first health food stores in the country, which became much used by Hollywood celebrities, and can lay claim to inventing the smoothie.

The man remained active until well into his 80s, and passed away in 2004 less than a fortnight before his 90th birthday.

But it is for his vocal ability that we celebrate him here. In 1968 he released the album Unpredictable on Sidewalk Records, a collection of pop covers, standards and a couple of original tunes massacred in his own unique way. Like many of the b-listers given an hour in the studio in the wake of Tiny Tim and Mrs Miller, he belts out these numbers with unhinged gusto, clearly enjoying every minute of it, but the results are predictably dire.

And, as if to prove the point, here we present his dreadful reading of These Boots...