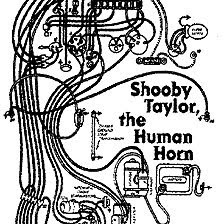 There's an art to scat singing - that odd noise that some jazz men and women (Cleo Lane, the incomparable Ella Fitzgerald, Louis Armstrong and others) make, not unlike a cat being strangled but definitely nothing to do with the other definition of the word 'scat'. You either like it or hate it and personally, unless it's Ella or Louis I can live without it.

But one man made such an impression that he will forever be linked with the world of scat. Shooby 'the Human Horn' Taylor never quite managed to get it together to release an album, although his son - William Taylor Junior - has dozens of reels of his father's idiosyncratic singing (often bumbling around and making up words over the top of other, better, recordings - read on if you dare) and a cassette of 14 of these songs was released as The Human Horn and made available before Shooby's death (in 2003, aged 74).

William 'Shooby' Taylor was born in Indiana Township, PA, on September 19, 1929, but soon moved with his family to Harlem, where he spent the majority of his life. Besides Shooby's several decades of pursuing a career as a scat singer, he also worked 21 years for the New York City post office. His idol was jive scat-master Babs Gonzales, who he tried (unsuccessfully) to emulate. He claimed that the epithet Shooby was bestowed upon him by jazz giant Dizzy Gillespie. As the new York Times once wrote of him: "As he tries to approximate the sound of a saxophone solo with his voice, he hits sour notes. He spits out nonsense syllables like a machine gun, communicating in a private language nearly impossible to imitate. And he rarely meshes with his background music, whether it is the skating-rink organ in ''Lift Ev'ry Voice and Sing,'' songs by the country singer Christy Lane or Mozart."

The recordings that make up The Human Horn cassette were self-financed made in a small New York Studio in the early 80s. Around the same time Shooby was booed off stage just a few seconds into his act at the famous Harlem Apollo : www.shooby.com/video/index.html

Here, for your delectation, is Shooby 'duetting' with the great Johnny Cash on Folsom Prison Blues: http://rapidshare.com/files/149760643/Johnny___Shooby_1.mp3.html