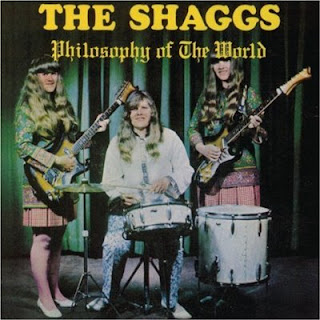 I find it hard to believe that I've been putting this blog together for the last 18 months or so and I've not yet posted anything by the Shaggs. Time to remedy the situation.

A favourite of everyone from Frank Zappa to Kurt Cobain, the Shaggs comprised of the three Wiggin sisters, Dot, Betty and Helen (occasionally joined by a fourth sister on bass) teenagers from New Hampshire who had a unique, original musical vision - fostered by their father (a kind of dirt-poor Colonel Parker) - that was complemented by the fact that they could barely play their instruments, at least not by any conventional standards.
Having never seen a live rock band, but having heard their favorite Herman's Hermits and Monkees songs on the radio, the siblings formed a trio playing at local hops to enthusiastic audiences before papa dragged his guileless daughters off to the recording studio. The resulting album, Philosopy of the World (which Rolling Stone's 'Alt-Rock-A-Rama' book ranked among the 100 Most Influential Alternative Releases of All Time) was earnest, authentic and almost unlistenable, with out-of-tune guitars, missed drum beats, wayward vocals and lyrics about everything from pet cats (My Pal Foot Foot) to the eternal struggle between teenagers and their elders (What Are Parents) and, naturally, a paen or two to Christ (We Have a Saviour).

The Wiggin sisters are still alive today but, unfortunately no longer recording, although they did make a follow up a few years later, The Shagg's Own Thing, collected together with Philosophy on an odd, remixed (and now out-of-print) CD from Rounder). Philosopy of the World was reissued by RCA a couple of years back, with liner notes by Irwin Chusid (author of the exceptional book Songs in the Key of Z) and is readily available from Amazon and your favourite music store (but possibly not from Zavvi!)
Here, for your delectation, is My Pal Foot Foot. Enjoy!