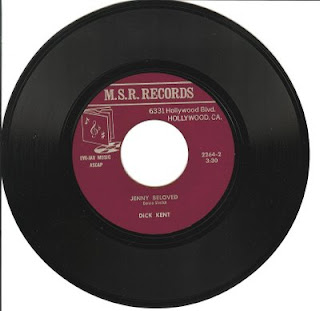 Song-Poem fans will be no strangers to the talents of Dick Kent, his inspired vocal deliveries have appeared on such prized poems as Hot Pant and Leather Boots, the original version of Gretchen's New Dish (one of the very few song-poems to be recorded not once, but twice and still sound horrible), the Maker of Smooth Music and the brilliant Octopus Woman, Please Let Me Go.

Dick was one of MSR's busiest staffers, cutting literally hundreds of sides for the company from its inception right through to its demise in the early 1980s as well as for associate companies Songuild, Kay-Em and others, yet little is really known about the man himself. A quick shufti around the interweb led nowhere, and I've yet to track down a photo of the elusive Mr Kent (if anyone out there has one I'd love to see it, but most that I've come across are actually of John Muir/Gene Marshall), but what I can tell you is that Dick Kent, Dick Castle, Sonny Cash, Buddy Raye and Richard House are all one and the same person - whose real name is (or, more likely now, was) Elmer Plinger.

Today's slice of Dick comes from an MSR 45, released around 1976/77 but sounding decades older; in fact this could easily have been recorded at the same time as I Want My Baby Back by Jimmy Cross, dealing as it does with a nigh-on identical subject - the decapitation of a loved on in an automobile accident. The perfect material for a pop song, in fact.