I can't believe it's been two whole years since I started this blog. Seems like only 24 months ago...

As a little birthday gift to you all I'm reposting a bunch of early World's Worst Records tracks over the next week; lots of these have been unavailable for download for a while now and one or two people have been asking me to make some of them available again. So here you go. This first bunch all originally appeared on this site in 2007.

I've left a couple out as they're either a bit dull or of dubious copyright (and we don't want to infringe anyone's copyright, do we?), but if there were to be a Best of the World's Worst Records, each of these would deserve a place. Make your own compilation of the best of the first two years if you like, and if there's anything missing that you're after let me know and I'll try and repost that too. Generous, huh?

Thanks for all of the feedback over the last two years, and keep coming back, as I've a veritable untapped goldmine of gloriously wrong records still to post.

From the very first WWR post, I Want My Baby Back by Jimmy Cross: http://rapidshare.com/files/284738612/Jimmy_Cross_-_I_Want_My_Baby_Back.mp3

If You Were The Only Girl In the World, by Barbara Cartland:
http://rapidshare.com/files/284741549/If_You_Were_The_Only_Girl.mp3

The Sound of Excellence 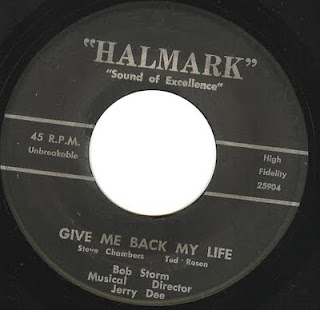 I absolutely love the Halmark stable. Another of the many song-poem labels, Halmark incorporated imprints such as Grand, Chapel and P.R.O.

What sets them apart from the many dozens of other song-poem companies is the otherworldly quality of their productions, caused mostly because, instead of using live musicians - a la Preview, Columbine or MSR - the company instead used a series of recorded backing tracks, or music beds as they're often known for their recordings, utilising the same backings again and again and again.
The fact that Halmark (sometimes incorrectly printed on their own discs as Hallmark) wasn't established until 1967 yet their music beds all seem to have been recorded in the 50s only adds to the overwhelming oddness of their releases. God only knows what the people who sent their dolars in thought when they received their discs back.

This particular ditty, Ode to Our Lady is not, as you might expect, a song about the Statue of Liberty or the Virgin Mary: it's about a recently deceased pooch. Halmark always credited the writer of these peculiar, off-kilter, opuses but seldom gave the performers their due, meaning that unless you've studied their output its difficult to tell who is singing. But as the company relied almost exclusively on just four singers I believe in this instance it's Halmark stalwarts Jack and Mary Kimmell.

Phil Milstein has written an excellent article about his efforts to track down Ted Rosen, the man behind Halmark, which you can read here: http://www.songpoemmusic.com/labels/halmark.htm

We are all interested in the future, for that is where you and I are going to spend the rest of our lives... 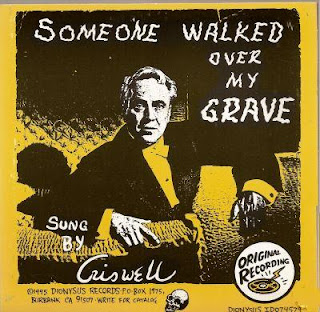 As well as having a passion for bad records I lust after bad movies too, in particular the works of Edward D Wood Junior, the actor, writer, producer and director of such cult classics as Glen or Glenda, Jail Bait, Bride of the Monster and - of course - the bad movie to beat 'em all, Plan 9 From Outer Space.

Wood's insane career has been documented elsewhere (and filmed, none to shabbily, with Johnny Depp in the title role), but if you need a recap try http://en.wikipedia.org/wiki/Edward_D._Wood,_Jr.

Ed, like many great directors including his idol Orson Welles, often drew on the same pool of talent for his films. One of his enduring stars was the TV psychic Criswell, famous for his wildly inaccurate predictions. Jeron Criswell King, to give him his full name, found cinematic infamy in Wood's movies, including Plan 9 and Orgy of the Dead. He was a flamboyant figure, with spit curled hair, a portentious speaking style and a wardrobe seemingly borrowed from Liberace. Wood employed the barking mad Criswell primarily because he owned his own coffin, in which he claimed to sleep and which often found its way into Wood's works.

He may be remembered as a failed psychic, but apparently he occasionally got it right: some sources claim that Criswell's most famous prediction was made onthe Jack Parr Program in March 1963, when he predicted that then-President John F Kennedy would not run for reelection in 1964 because something would happen to him in November 1963.

But we love him for something else. The Amazing Criswell passed from this life in 1982, yet some 13 years later his only 45 single was released, the dreadful ditty that is Someone Walked Over My Grave.

And here it is. Enjoy!