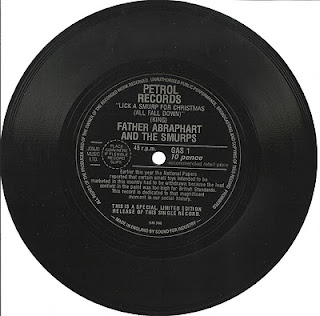 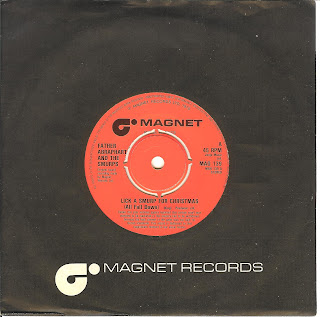 I realise that I should be thoroughly ashamed of myself, but I couldn't leave you to enjoy your Christmas without posting this horror, and admitting to you all that I possess not one, but two versions of this atrocity.
Released at the height of the Smurfs fame, it came as both a hard vinyl 7" (backed with a sing-along instrumental) and a one-sided flexi which was available for a limited time for just 10 new pennies. It recounts the tale of how certain Smurf-related toys, which had been widely imported into the UK, were causing all sorts of problems - primarily because the lead-based paint that had been used to decorate the dear little things was highly toxic.
That would probably be reason enough for the disc to find a place in any collection of audio horrors, but it gets better. The record was created by Jonathan King - one time pop emperor, discoverer of both Genesis and 10CC, manufacturer of several huge hits including Everyone's Gone to the Moon, It's Good News Week and Una Paloma Blanca and, of course, a state registered sex offender.
Oh yes! This was recorded by the same man who was sentenced to seven years in prison in November 2001 after being convicted of sexually assaulting a series of teenage boys, aged 14 to 16, between 1983 and 1989. Released on parole in March 2005, King has always maintained his innocence, and over the last few years has released a CD of new material (which attracted even more controversy with one some supposedly about the UK's worst serial killer Dr Harold Shipman) and a volume of autobiography.

Anyway, whatever you choose to believe, here is what I believe must be one of the worst Christmas records of all time. Enjoy, and have a great Christmas! 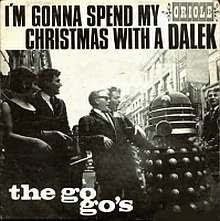 A bumper bonus for you this week: not one, not two, but three Xmas-themed oddities.

First up a wee video clip for you courtesy of the delightful John Scott Cree who, far from being upset at my including his rendition of Rudolph the Red Nosed Reindeer in our Christmas collection was more than happy to share this with you. John sends his own Christmas wishes to regular WWR fans and especially to Ross Hamilton - the man who brought him to my attention in the first place.


What a lovely man! If you haven't done already, check out his other videos on You Tube.

Now, and again with unending thanks to Ross, another gem of a bad record. I'm Gonna Spend My Christmas With A Dalek was released on Oriole records in the UK just in time for Christmas 1964 - at the height of the first wave of the Dr Who craze - by a band called The Go-Go's (no relation in any way to the 80s hitmakers led by Belinda Carlisle and Jane Weidlin), a semi-professional group from Newcastle, whose ages ranged from 17 to 20. The vocals were sung by youngest member Sue Smith (who put-on a child-like voice and mis-pronounced her 'r's not unlike Morwenna Banks' little girl character from cult Scottish comedy series Absolutely) and a limited amount of copies came in a black and white picture sleeve (see above), showing a cardboard cut-out Dalek frightening gullible passers-by in a London street.

The piss-poor sound effects, incidentally, were not fashioned by the BBC Radiophonic Workshop.

Finally this week one of my all-time Christmas atrocities. Merry Christmas Elvis, by Michelle Cody. I can tell you very little about this abomination, apart from the obvious fact that it was released after August 1977. Just listen, enjoy and try not to choke on your mince pies at the song's saccharine denouement....
tp://rapidshare.com/files/322569089/merry_christmas_elvis.mp3

I've got one more exceptionally bad Christmas record - released in 1978 by a man who is now a registered sex offender no less - which I hope to deliver to you before December 25. My heart glows with pride at the thought of a number of you downloading these dreadful ditties and ruining what might possibly be the last family Christmas party you ever get invited to!
Posted by Darryl W. Bullock at 13:15 1 comment: