I'm off on a short, but much needed, holiday today but I wanted to leave you with something, as they say, for the weekend.

It's a bit of a cop out, as this particular recording has never been released on vinyl, rather it comes from a US TV special: ABC's 1977 all-star extravaganza The Beatles Forever, featuring such top ranking performers as Tony Randall, Bernadette Peters, Diane Carroll, Paul Williams, Mel Tillis, Ray Charles and Anthony Newley.

And it's Anthony Newley we look to today for his outrageously awful reading of the George Harrison classic Within You, Without You. The whole programme sucks, especially the two dreadful Beatles' medleys performed by the majority of the cast, but Newley (ex-husband of Joan Collins) really should have known better. No stranger to the pop charts, Newley had enjoyed a successful career as a vocalist, beginning in 1959 with the UK top 5 I've Waited So Long, followed by a sting of hits including Personality, Why (originally a 1959 U.S. hit for Frankie Avalon) and Do You Mind, written by Lionel Bart. He even won a Grammy in 1963 for the self-penned What Kind of Fool Am I, wrote the lyrics to Goldfinger, the Nina Simone classic Feeling Good and wrote or co-wrote a shed load of musicals, including Stop the World - I Want to Get Off and Willy Wonka and the Chocolate Factory, nominated for an Oscar for Best Musical Score.


So how did someone with such a pedigree get involved in such dross as this, especially in the same year that he was voted the Male Musical Star of the Year in Las Vegas? The mind boggles.

Posted by Darryl W. Bullock at 09:16 4 comments: Links to this post

Why is he living? 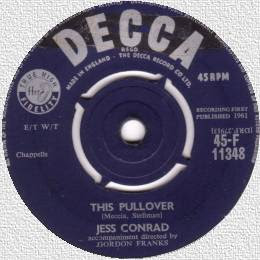 Today's piece of sheer hokum comes from the world's cheesiest pop star, the inimitable Jess Conrad, with the flip side of his 1961 release This Pullover - an all-time classic bad record Why Am I Living?

Born Gerald James in 1935 (although for many years his official biography would claim that he was born in 1940), young Jerry held down a variety of jobs before deciding that acting was what he wanted to do, scoring extra work in some late 50s British movies, a spell in repertory (when he settled on his stage name), the lead in a television play Rock-A-Bye Barney, about a rock and roll performer.

The legendary promoter Jack Good encouraged Jess to go into the studio to cut some sides, even though singing was not one of the rising star's strong points. The song chosen for his first recording, a cover of Skip And Flip's US hit Cherry Pie crept in to the bottom of the Top 40, but his third single, Mystery Girl, managed to break Top 20 in 1961. Jess managed to scrape into the charts with one more 45 the following year, but after that his chart career was at an end - although he has since managed to carve out a very unique career for himself.  This very track appeared in the film Rag Doll (1962), a crime drama (released in the US as Young, Willing and Eager) in which Jess played the role of Shane. In 1963 he landed a major role in TV series The Human Jungle, a weekly drama which starred later Pink Panther actor Herbert Lom in the lead role of psychiatrist Doctor Corder. In the second episode of the series Corder was called in to deal with the problems of rock and roll star Danny Pace, played by Jess. Several numbers were recorded specifically for this programme, released as a Decca EP in 1963. These days Jess is still active, appearing regularly on TV, on stage (he's played Jesus!) and even at the occasional rock'n'roll or 60s revival show. He's also recorded albums with a bunch of pals under the name The Showbiz XI, the same name of his long-running (more than 40 years now) charity football team.

The recording I present for your delectation today is the b-side to his fourth Decca single. Many of you may think you already know it, featured as it was on the late, great Kenny Everett's Worst Records album, but the three Jess Conrad cuts on that compilation were in fact later re-recordings. This is the original, and the best (or worst!). 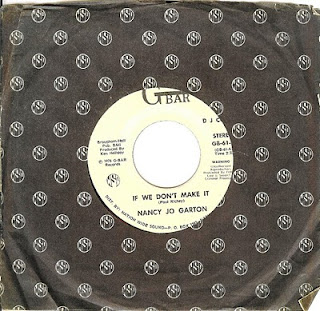 A real slice of prime Country ham for you today, and a record I find it impossible to listen to without hearing Lurleen Lumpkin squealing in my ear.

Nancy Jo Garton, who scored a minor radio hit with her cover of Big Blue Diamonds in 1975 (actually the flip side of I Like What I Got), drawls out this tortuous ballad about a couple battling against poverty in their two-room hovel, one pair of shoes between them, nothing to drink but water in such a fashion that I can't help thinking that the authors of the yellow-skinned songstresses one big hit Your Wife Don't Understand You, But I Do must have heard this first.

I'm sure there are nuances that are passing me by, but to me it sounds exactly like every other depressing Country record I've heard over the years. God, life must be tough in Redneckville.

There's not a lot else I can tell you about this: Nancy Jo seems to have had a short-lived career in the music industry, recording a few sides and at least one album (with the equally unknown Ken Holiday - who produced this cut - titled, with a huge amount of originality, Ken Holiday and Nancy Jo Garton) for Nashville outfit G-Bar between 1975 and 1978 before vanishing into obscurity.

Nancy Jo's career as a Country minstrel may have been short and to have born little fruit, but it does seem that Ken and Nancy Jo managed alright for themselves, as a Ken and Nancy Jo Garton (if we assume that Holiday was nowt but a stage name) now own and run the G Bar Ranch (come on, that has to be more than a coincidence!) in Depew, Oklahoma.

It's immensely satisfying to know that, even if the couple in this horrible record didn't make it, Ken and Nancy Jo did. And good luck to them!

Posted by Darryl W. Bullock at 09:14 6 comments: Links to this post