I Said Captain, I Said Wot? 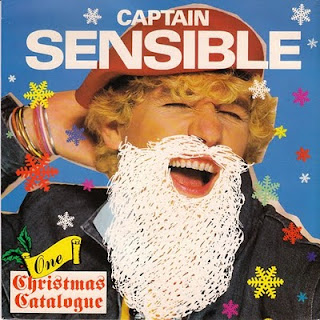 Captain Sensible, founder member of one of the most important acts of the last four decades, The Damned, all-round stand-up guy (by all accounts) and the purveyor of a slew of interesting, occasionally terrible but often highly enjoyable solo releases - including the UK number 1 Happy Talk and it's follow up, the rather wonderful Wot? What's not to like?

This, that's what (or Wot)! A frightful and totally pointless cover version of the Frankie Goes to Hollywood classic Relax, even more appalling than the red beret-wearing Raymond Burns' terrible take on Elton Motello's Jet Boy Jet Girl (later reinterpreted by Plastic Bertrand  as Ca Plane Pour Moi). And that's not even mentioning his piss-awful (although charity-inspired, folks) recording of the Hokey Cokey, his snooker quiz show theme tune or his grave-stomping remake of Smash It Up (parts 1, 2, 3 AND 4, for Christssake).

This particular crime against the ears turned up on his eighth solo single, the November 1984 (that's just a few months after the original FGTH version was a hit) release One Christmas Catalogue.

The Captain has been responsible (or at least partly responsible) for some of the greatest records of the punk and New Wave era - the original Smash It Up, New Rose, the remarkable Strawberries album and so on, and The Damned hold the distinction of being the first punk band to release a single (New Rose), an album (Damned Damned Damned), to have a hit in the UK charts and to tour the United States. Splitting up and reforming on a number of occasions with varying lineups (and varying success) the Captain is once again a member of the band and they're still touring and recording to this day.

Kudos to anyone who can survive 35 years in this industry and still turn up on stage every night to play, but his solo career has hit some unbelievably dismal low points - including this one. Anyone who can squeeze the phrase "What d'you fuckin' want, shithead" on to the a-side of a hit single is alright with me, but in the case of Relax I've got to say 'Hey Ray, put a beret in it!'

Posted by Darryl W. Bullock at 15:47 7 comments: Links to this post

I Got Me A Bilpie 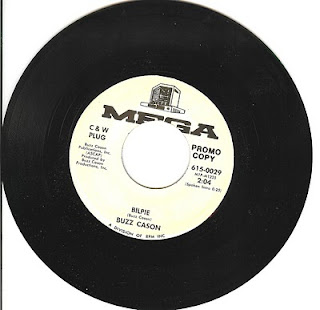 Ugh. Is there anything more loathsome than comedy country records? What is it with these people?

Today's shameful exhibit comes from Buzz Cason - a respected name in music with a long and illustrious career as a singer, songwriter, producer and author. So how did he come to write and record this turd, a laugh riot (not!) about a hillbilly groupie, or Bilpie?

Cason was a founding members of The Casuals, Nashville's first rock and roll band. In 1960 he began his solo career under the pseudonym Garry Miles, securing his first Top 20 hit the same year with Look For A Star. He was also a backing singer for Elvis Presley and Kenny Rogers. His biggest hit (as co-writer) was with Everlasting Love, originally recorded by Robert Knight but which became a Number 1 hit in the UK for The Love Affair in 1968. he also co-wrote Knight's follow up, the brilliant Love On A Mountain Top, another huge UK hit.

In 1970, he founded the Creative Workshop recording studio, where Dolly Parton, Merle Haggard, The Judds, The Doobie Brothers, Emmylou Harris and Olivia Newton-John have recorded material. Now 70, Cason is still writing and producing songs and his book, Living the Rock 'N' Roll Dream (2004), is about the events and careers that shaped the early days of rock and roll. His latest album, Working Without A Net, was released recently.

Buzz, I could forgive you just about anything for having a hand in writing songs as great as the Robert Knight singles, but this is just horrible. Welcome to the World's Worst Records - on the strength of this sorry song you deserve to be here.

Posted by Darryl W. Bullock at 15:04 4 comments: Links to this post 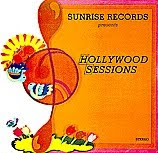 Today's dreadful, sub funk cacophony comes to you courtesy of Buddy Raye and originally appeared on one of Sunrise Records' many Hollywood Sessions song poem collections. Written by one Tommie L Spencer (who also penned the equally atrocious He's Not At Home on the same album), I Need You is pretty standard song poem drivel heightened only by Buddy's whiny monotonous delivery and the wonderfully out of tune guitar intro.

So, what can I tell you about Buddy Raye? Well, keen readers of the World's Worst Records will already know that Buddy Raye is the nom de plume for Elmer Plinger, who also recorded for other song-poem companies as Dick Kent, Dick Castle, Sonny Cash and Richard House. As Buddy Raye Elmer recorded almost exclusively for the Sunrise label, a company which put out literally hundreds of albums in the Hollywood Sessions series during the early to mid-80s and which seems to have finally shut up shop around 1988.

During his time at Sunrise Buddy/Elmer put his vocal cords to good use, performing on in excess of 1,000 recordings for the company - songs like the fantastically awfiul Gymnasium Girl, 10 O'clock is Boogie Time, Bringin' Back the Twistin' and a fatuous ode to Ronald Reagan titled We Have the Right Man in the White House. I haven't done the math, but I think its a safe bet that if you add all of the Buddy Raye, Dick Kent et al recordings together his output is probably even greater than that of Gene Marshall/John Muir and of song-poem warhorse Rod Rogers/Rodd Keith. Mindblowing: what it must have been like to have spent a decades-long career being forced to sing rubbish like this.

Anyway, enjoy Buddy Raye's performance of I Need You

Posted by Darryl W. Bullock at 13:00 No comments: Links to this post 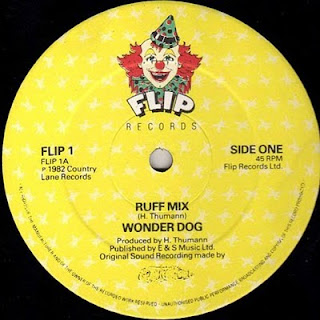 Today's bottom of the barrel-scraping tune comes courtesy, once again, of occasional contributor Ross Hamilton, although I'm sure many of you are familiar with the genesis of this particular poptastic track. Personally I can recall, working as the singles buyer for HMV in Gloucester at the time of its release, the seemingly endless number of free copies of this single foisted upon us in an effort to help it climb the charts.

Let me hand over to Ross: 'Another piece of trash that I re-discovered the other week. I remember this mostly from a guy I use to hang around with in the mid 1980's who only owned about three records....and this was one of them. I use to love it but, in those pre-eBay days, could never find my own copy - even though, when you are 10, I don't suppose anyone looks too hard for anything! I never forgot the track though, and on one quiet work afternoon (no doubt a Friday) I was looking through eBay and put the title in as a bit of a laugh. A copy was available and I bought it.

Playing it brought back some memories but little did I know that the person who had originally plugged this hit (it reached the top 40 back in 1982) was none other than the wrecker of music Simon Cowell.'

It's true! Basically Cowell, in his early days as a record plugger, heard a track by a German 'artist' by the name of Harry Thumann, who produced a song that sampled dogs barking and called it Ruff Mix. Tumann wasn't the first, or last, producer to do this. Stiff/Virgin Records in the UK released a single by the Singing Sheep (which I have somewhere and will post at a later date), and I used to have an entire album of Beatles tunes covered ala Ruff Mix credited to the Beatle Barkers. Cowell, who was a partner in the British outfit E&S Music with his former boss at EMI, Ellis Rich, acquired rights to the song and began promoting it, crediting it to Wonder Dog. Simon actually dressed up as Wonder Dog and appeared on a handful of UK kids TV shows to promote the song.

Fittingly E&S, who scored several hit records traded from offices in a converted gent's toilet in the NCP car park on Brewer Street in London's Soho.

If you haven't seen the footage on one of those 'before they were famous'-style compilation programmes that ITV put out every couple of months, here it is in all its glory. Listen carefully to the voice....

Ross continues: 'Cowell has been responsible for other novelty recordings travesties featuring the likes of wrestlers of the World Wrestling Federation, Teletubbies, Zig and Zag and the Mighty Morphin Power Rangers but this is the first. By the time those other songs came out, I had become a bit older and a bit wiser with my record purchases.'

Thanks Ross, for reminding me of this travesty.

Posted by Darryl W. Bullock at 10:49 3 comments: Links to this post