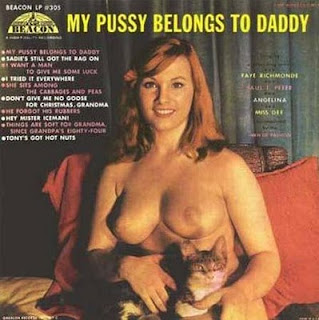 A two-for-one today, thanks to another contribution from the always reliable Ross Hamilton, who writes: "I have heard about this album down the years but never found a copy of my own until now.

I don't know too much about it I am afraid, but it comes under the category of adult albums like (those by) Kay Martin and her Bodyguards, full of double entendres and sexually suggestive lyrics."

I too have come across this before, its always cropping up on those 'bad album art' sites, but had never heard any of its contents until Ross passed these two cuts on to me.

There are just 10 tracks on the Beacon Records album My Pussy Belongs to Daddy, subtitled For Adults Only - Spicy Songs Sung By Outstanding Artists.

Four artists are credited, none of them outstanding. The title song, credited to Faye Richmonde, is fairly mediocre and like so may of these simpering, sniggering, so-called 'adult' albums, aimed at the stag party market, but the other track I'm sharing with you today - He Forgot His Rubbers, performed by Angelina - is great; it reminds me of the wonderful Davy's Dinghy by Ruth Wallis, a Dr Demento standard and one of my favourite comedy records of all time. Co-incidentally Davy's Dinghy was recorded in 1956, just one year before My Pussy was released.

It seemed that Beacon began by specialising in these kinds of releases. Their first album, Hot Pepper, featured the same line up as My Pussy Belongs to Daddy (augmented by Nancy Steele) and included such 'classics' as I'm a Virgin, But I'm On The Verge, It Was Hard When I Kissed Her Goodbye and, not being the kind of outfit to let anything go to waste, the album also includes an earlier outing for My Pussy....cheapskates!