Regular WWR followers will know that I am a huge Beatles fan, and probably also know that John Lennon is my all-time musical hero. There are other bands and musicians – Andy Partridge of XTC, David Gedge of the Wedding Present, Peter Buck of REM and dozens more – that have been (and still are) massively important and influential, but truth be known if my house was burning down and I could only save one CD it would probably be more likely to be John Lennon Plastic Ono Band than Apple Venus Volume One, Seamonsters or Up.

But I’m not blind to the fact that there are some horrendous tracks in the Beatles’ sacred canon (Maxwell’s Silver Hammer being an obvious example), just as I am not so blind as I cannot see that Mind Games is a pretty shitty album: okay, so it’s got a couple of decent tracks, but seriously, Mind Games is the nadir of John’s solo output.

Anyway, this preamble is my way of introducing you to the fact that today I bring you not one, not two but three terrible cover versions of one of John Lennon’s most iconic compositions: Give Peace a Chance.

A true classic, the modern-day We Shall Overcome, Give Peace a Chance was John’s first solo single, recorded on his extended honeymoon in 1969 and reaching number 2 in Britain and number 14 in the US. None of the three versions I present for you today troubled the charts in any country (unless you know better that is).

First up we have Mitch Miller and the Gang’s recording, released as the closing track of their 1970 Atlantic album Mitch Miller and the Gang Peace Sing-Along. One of the most influential figures in American popular music during the 50s and 60s, Miller was head of A&R at Columbia Records, a best-selling recording artist and had a popular NBC television series to boot, but his sanitised version of Lennon’s counter-culture hit is as bland as they come.

Next it’s Louis Armstrong – yes, Louis Armstrong – with his perverse rendition. I really don’t know what to make of this one at all; it’s just bizarre. Released on his 1970 album of pop covers Louis Armstrong and Friends, this recording was actually released as a posthumous UK A-side (on Phillips in 1971) with a re-recording his huge hit What a Wonderful World on the flip.

Finally, for now at least, is the Hot Chocolate Band’s take on Give Peace a Chance. Released on the Beatles’ own Apple Records in 1969 (Apple 18), it’s abominable; a cod-reggae mess with stupid lyrics and idiotic, fake-patois vocals. Who could have guessed that with a slight name change the group (as Hot Chocolate) would go on to score at least one chart single every year in the UK between 1970 and 1984 and make some of the best-loved pop singles of all time?

Anyway, have a great weekend, and I hope you all enjoy. And by the way, the records might be awful but the sentiment is still as valid today as it was in 1969.

I Chew Chew Choose You 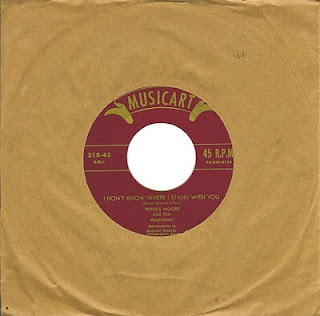 Just before Christmas I introduced you to Grace Pauline Chew, American voice teacher, soprano and song composer, and the author of a number of releases on the Philadelphia-based Musicart label during the 1950s. No doubt you’ll remember Mamie Watson’s dirge-like You Don’t Remember Any More and Hank and Jimmy’s ridiculous You’re The Only One For Me, with its spectacularly inept hand clap solo.

Well, today I present some more of Mrs Chew’s compositions for you, again issued by Musicart, and again equally moronic.

First up is I Don’t Know Where I Stand With You, performed by Phyllis Moore and the Magictones from a circa-1954 45. Now I do not know who Phyllis Moore is (or should that be was?), but I’m guessing from her delivery, especially with the throwaway line right at the end, that she was some sort of Vaudeville performer. It’s certainly not the same Phyllis Moore who has released a number of gospel recordings in more recent years – well, not unless she’s in her 90s that is. The recording was described as “soprano with organ backing in an amateur sounding effort” by Billboard in February 1955. Says it all, really. There’s a quote from a Phyllis Moore in a 1943 edition of Billboard where she calls herself a “concert hula dancer” and says that when she works “in nightclubs the waiters are the only ones applauding”. I’d love it to be the same person.

I’m also including its B-side, Helpless by Richard Rossiter and the Nightingales, for completeness’ sake. Banal and dated, even for 1954, it sounds to me as if its come from an early 30s musical, and the cinema organ accompaniment drag it back to the days before the talkies. The odd rumbling noise you hear from time to time and the distortion when Richard hits a high note are all present on the disc itself - maybe there was someone in the next studio banging on the wall, trying to make him stop.

I’ve also managed to pick up another Musicart 45, the 1952 release by Bud Brees with Art Smith, It’s Just Because I Love You backed with an Art Smith-performed instrumental entitled Will You although it’s just boring, rather than truly dreadful, notable perhaps for the fact that the A-side is credited to Chew-Brook – the first instance I’ve come across of anyone apart from Grace Pauline Chew receiving a writer’s credit on a Musicart release.

So, for now, enjoy (if that’s the word) more from the febrile mind of Grace Pauline Chew