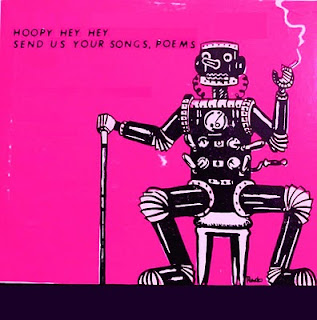 I wanted to give you all something a bit special for this centennial posting, so I’ve compiled a CD’s worth of song poems – 28 in total – just for you. There have been a number of song poem compilations issued over the years, but none of the 28 songs included here have, to the best of my knowledge, appeared on any of these collections – although a few have appeared in this blog over the last four years.

Now, 28 terrible records would probably be a bit much, so this compilation mixes the truly terrible with some of my all-time favourites. In other words, not every track in this collection deserves the epithet ‘world’s worst’, but I thought you’d rather a cross-section of song poems than almost eighty minutes of brain-deadening awfulness.

The collection, which I've named Hoopy Hey Hey (if you listen to the track Tipsy Ippsy you'll see why) features some of the titans of the song poem world: Rodd Keith, Dick Kent, Cara Stewart, Ralph Lowe, Bob Storm, Sammy Marshall and Gene Marshall among them. The Full track listing is as follows:

Download them (it's a big file, mind, almoss 100Mb), cut them to CD, print of the little insert I’ve knocked together for you too and enjoy.