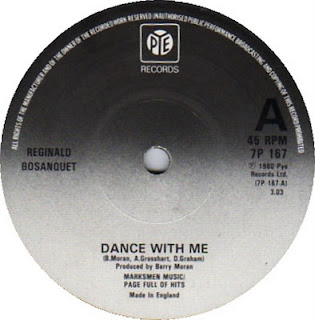 Our friend, and bad music aficionado, Ross Hamilton has once again come up trumps; this week he has supplied me with a clutch of truly terrible tunes, a real embarrassment of wretches.


Today I bring you one of those tracks: a gobsmacking, jaw-dropping foray into the world of disco by none other than the late ITN newscaster Reginald ‘Reggie’ Bosanquet, himself forever immortalised in song by Pamela Stephenson on the great late 70’s/early 80’s BBC comedy series Not the Nine O’clock News. Released on Pye records in 1980 (a year after NTNOCN’s Oh Bosanquet) Dance With Me, backed with Newsletter, is utterly awful. Bosanquet slurs his way through the lyrics (such as they are), the seemingly sozzled newscaster trying his damnedest to lure lovely ladies into his very own disco hell. Intoxicating stuff.
Reggie, the son of the cricketer Bernard Bosanquet, inventor of the "googly", was on the staff of ITN from its earliest days, becoming head anchor in 1974, when Alastair Burnet left to join the BBC's current affairs show Panorama. But he was not without his critics: at times he struggled with unfamiliar words, and his trademark slurred delivery led to suspicions that he was a heavy drinker. There are many stories circulating about Reggie wandering around the halls of ITN with a glass (or two) of wine, or something stronger, in his hands, stories which led to such nicknames as Reginald Beaujolais and Reginald Boozalot. However, many of these stories are apocryphal: his co-anchor (and national treasure) Sir Trevor Macdonald was branded a liar by colleagues in 2008 for stating that Reggie “had to be dragged out (from a bar across the street from the ITN studios) at five minutes to 10 and persuaded to sit down”.
Remembered chiefly these days as much for his terrible toupee as his reputation as a drinker and womaniser, Reggie was one of the most recognisable faces on British TV during the 1970s. It was his retirement from ITN’s flagship News at 10 in 1979 which prompted the NTNOCN team to immortalise him in song. Shame that a year later he was persuaded to ‘perform’ what was to become his own musical epitaph.

Sadly, he died of pancreatic cancer just four years after his one brief sojourn into the disco field, aged just 51. It has been suggested since his death that he suffered from epilepsy, which may account for his less-than-erudite delivery. Oh Reggie, you know something? All news is bad news since you went away….

Email ThisBlogThis!Share to TwitterShare to FacebookShare to Pinterest
Labels: Dance With Me, Not the Nine O'clock News, Reginald Bosanquet, Ross Hamilton 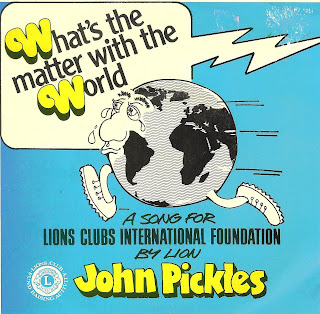 Today’s audio abomination was found in Booty, a second hand store in Bristol, just a couple of doors away from my office. I was browsing the shelves there yesterday and came across this horror, resplendent in its dreadful sleeve (left), and knew right away I had to have it. There’s no date anywhere on the disc or sleeve, but I’d date this at around 1979/1980, and it’s release was prompted by the wish to raise money for the Lions Club International Foundation, the charitable arm of Lions Club International, the world's largest service club organisation which currently boasts 1.35 million members in more than 46,000 clubs worldwide.

Recorded at Kaley Studios in Rotherham (where Pulp would later record) and released on the Doncaster-based Future Earth Records, this is a terrible record. The insipid lyrics - “what’s the matter with the world? Why can’t we live together? What’s the matter with the world? Let’s love one another” - are enough to set my teeth on edge (the lyrics of the B side – What A Beautiful Dream – are even more vomit-inducing) but there are a few other things about this particular disc that make it a must for the World’s Worst Records. The sappy, maudlin, sub-McCartney lyrics and de rigueur key change present on both sides would normally be enough, but the discovery that the man behind this bland bucket of hippy-dippy clichés, Lion John Pickles (as he’s credited on both label and sleeve), went on to help create Jive Bunny and the Mastermixers elevates it above its all-pervasive mediocrity.

DJ and producer Les Hemstock (also from Doncaster) created and mixed the first Jive Bunny track for the 22nd monthly Mastermix, a specialist DJ-only release from the company owned by John Pickles. John, his son Andy and Hemstock – along with DJs Ian Morgan and (later) John Smith - went on to create something of a global phenomenon with Jive Bunny, enjoying 11 UK chart singles (including three number ones) in a little over two years and a number of hits worldwide. John Pickles is now the Chairman of the Music Factory Entertainment Group (son Andy is Deputy Chairman), owners of Mastermix and Jive Bunny. To date Jive Bunny has released close on 20 albums, all of which are available from the Mastermix website.
I realise that should be ashamed, taking the Mickey out of a record released with the sole aim of raising funds for good causes, but the fact that its composer and performer was instrumental in the creation of one of the all-time musical criminals just meant that I had to share it with you. Oh, and the letter on the back of the sleeve, from the Vice President of the International Association of Lions Clubs, is so self-congratulatory (‘we have provided a ray of hope and comfort to those with little to live for’)  makes me want to go out and kill someone.

So, enjoy both sides of Lion John Pickles’ single What’s the Matter With The World/What a Beautiful Dream. 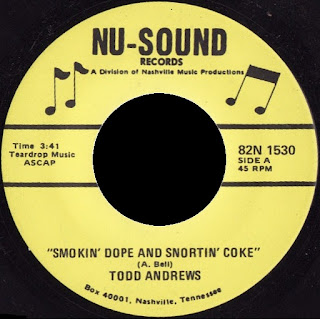 Todd Andrews, who recorded almost exclusively for the Nashville-based Nu Sound label, is one of my favourite of the many Song Poem singers. His plaintive yet disinterested style is so ill-suited to some of the material he was forced to sing that it adds to its absolute ‘wrongness’; this is miserablist country of the highest order. It’s clear from his intonation and phrasing that he never bothered to give any of these songs more than a single run through, the ‘country-by-numbers’ backing is so safe and similar that anyone with more than a passing interest in singing could work out which way the tune was going to lead them. The fact that he almost always breaks off into a spoken-word passage only enhances that sense of ‘I really can’t be arsed to learn this garbage’ for me.

I’ve tried to find out some info about the life of Todd Andrews but have drawn a complete blank. He’s certainly not to be confused with the much younger Todd Andrews currently gigging around the States (a relative, perhaps?), the comedian or the chess master of the same name. Our Todd, judging by his performances, must have been in his fifties during the 1970s - the time most of these sides were recorded. Other than that I know nothing. All info gratefully received.
Nu-Sound was an odd set up, knocking out the occasional vanity or self-funded 45 but specialising primarily in song poems: from 1967 onwards a Nu Sound Recording Studio operating in Nashville, was advertising its demo facility in Billboard while in the same magazine an ‘established, progressive’ Nu Sound Records of Nashville was looking for country singers. Other Nu-Sound companies exist (or existed): one based in Ohio, another in Kentucky, a third in Brooklyn and a fourth which was primarily a reggae label. All of these seem to be unrelated, and I’m sure there are even more out there somewhere.
So, apologies for the lack of info on today’s artist, but enjoy the great Todd Andrews on a couple of truly dreadful sides - Sweating It Out (Nu Sound 79N 1404, the b-side to the equally hideous Three Little Children by Carolyn Boyle) and his cautionary tale of a night spent at a pill popping party, the utterly brilliant Smokin’ Dope and Snortin’ Coke. 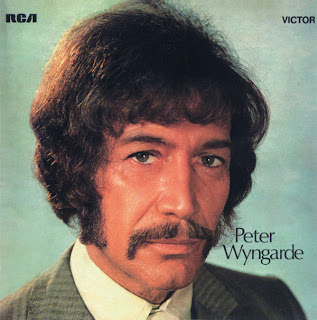 Devotees of the bizarre will already know that the French-born actor Peter Wyngarde (a.k.a Cyril Goldbert), famous for his roles in 60s action dramas Department S and Jason King and infamous for hanging around the gents loos in Gloucester bus station, an incident (and subsequent arrest) which pretty much killed his career overnight, released a rather odd album on RCA in 1970.

Titled Peter Wyngarde (and more recently reissued by RPM under with a new cover under the name When Sex leers Its Inquisitive Head) the album, unusually for the time, does not feature Peter crooning his way through a series of standards but rather contains more than a dozen mostly spoken word tracks with a range of different backings, from folk to country and western.

What's most notable about the album is how utterly bonkers it is. A concept album of sorts, it begins with Monsieur Wyngarde inviting you into his home, offering you a drink and asking you to relax as he slowly build up the seduction. The centerpiece of the album, Rape, is easily one of the most peculiar tracks ever committed to vinyl - three minutes of racist jokes to a go-go backing and someone constantly howling RAPE in the background. It doesn't get much better, but often gets worse: an odd, jazzy rendition of The Attack's 1968 single Neville Thumbcatch, the terrible mess that is Jenny Kissed Me and/or Jenny Kissed Me And It Was... and the track I present for you today - the perverse, peculiar and downright puddled Hippie And The Skinhead.

It's clear that the three men responsible for this self-indulgent nonsense, Wyngarde and producers Vic Smith (who, under his own name and his nom de plume of Vic Coppersmith-Heaven also produced The Jam, Black Sabbath, Cat Stevens and others) and Hubert Thomas Valverde had a grand old time putting this together. What isn't clear is who it was intended for. Today's track, Hippie and the Skinhead (here in an edited version, ignoring the rambling intro) is full of gay innuendo: the line 'then one night he went to troll the Dilly' translates, for those in the know, as 'one evening he went off looking for sex, probably with a bit of rought trade, in Picadilly Circus'. Wyngarde's sexuality, although no great secret in acting circles - he was known off-stage as Petunia Winegum apparently - was kept hidden from his adoring female fans, which is why his arrest for cottaging (in my home town! I'm so happy!) put paid to his TV career. Yet listening to this it almost seems that he's begging to be outed.

Still, if you like this get along to your nearest independent record store (or Amazon if you must) and buy a copy. I promise you won't regret it.