Everything Else is Really Lame 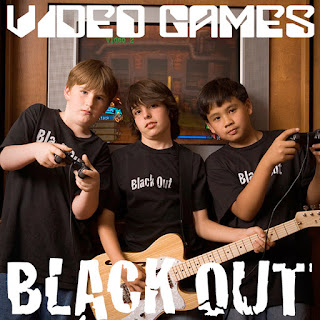 One of the singularly most annoying things I've heard in years, Video Games was released in 2006 by the Black Out Band (aka the Black Out Kids). Not to be confused with the Welsh post-hardcore (whatever that is) oufit, this Black Out were three precocious, middle-class boys from Virginia: Hunter Watson on vocals and lead guitar, Tug Hunter on bass and drummer Matthew Salutillo. Hunter and best friend Matthew were 11 years old when they recorded Video Games; Tug was the old man of the group at 12.

Sounding exactly like you'd expect a trio of whiney pre-teens to sound, apparently this ghastly racket started life when the boy's music coach Dennis Decreny (not a teacher you understand; daddy had the money for a private coach) found that the boys would rather be playing with their X Boxes than learning the chord sequence to Three Blind Mice. Coach, as he was known to the youngsters, told Hunter he ought to write a song about his obsession. The following week, with assistance from his bandmates, Hunter had the chorus and first verse.

The three boys worked out the basic melody but it was left to Mrs. Watson to come up with the rest of the words. The boys recorded several more songs - including the original compositions Graffiti, 6th Grade King and Recess Blues - lined up some low-key local gigs during their summer vacation and set up their website - which laughably compares the tiresome threesome to Neil Young. Mr. Watson founded up his own record label, Chapman Records, and started to push their merchandise onto an eager public. Matthew's mum Wendy organised a video shoot, with 30 local schoolkids and lots of free pizza, and it looked like Black Out Band were on their way to the big time.


Only the public were not quite as eager as Jerry and Judy Watson had hoped. Hunter's parents might have thought that the Black Out Band were going to be the next big thing, but the rest of the world disagreed. Outside of a few random radio and TV appearances by 2008 it was all over.


Hunter, Tag and Matthew are around 17 or 18 now and, no doubt, embarrassed as hell for having produced this miserable diatribe. Or maybe not; for, when all is said and done, these three young men have written and recorded their own music and have performed it in front of hundreds of people. Which is a damn sight more than most of us. If you want more, the band's MySpace page is still up and running.

UPDATE, June 22 2016:  It appears that Hunter Watson, singer and guitarist with the Black Out Band, was killed in an automobile accident on Saturday, June 18: 'Hunter B. Watson, 20, of McLean, Virginia, died after the passenger side of a 2015 Jeep Grand Cherokee in which he was traveling was struck by a pickup truck, said Master Cpl. Gary Fournier, a spokesman of the Delaware State Police. Watson, and the Jeep's driver, 20-year-old Rod Zarafshar, of McLean, Virginia, were in Delaware for the Firefly Music Festival in Dover.

Zarafshar's Jeep failed to stop, Fournier said, entering into the path of the Falcone's pickup truck. The pickup truck then struck the passenger side of the Jeep. Watson, a front-seat passenger of the Jeep, was pronounced dead at the scene.' Delaware News Journal, June 20, 2016.

Hunter, a Syracuse University sophomore, will be greatly missed by his family and friends. My condolences to all who knew him.

Posted by Darryl W. Bullock at 07:05 3 comments: Links to this post

God Only Knows by The Beach Boys is, hands down, one of the most beautiful, sublime and perfect pop songs ever. It's one of those songs that should be on everybody's all-time favourite lists. Brian Wilson was at the height of his powers, the Beach Boys were at the top of their game, Carl Wilson's vocal is pitch perfect and the overall effect cuts me to the quick. It's one of those records that sends shivers down my spine every time I hear it.

Unfortunately the same cannot be said about Toru and Kojima's cover version: a miserable, mediocre pastiche which has my dog covering his ears in pain. Maybe if English isn't your first language deciding to cover something as great as this is not the most sane thing to do. I know that other Japanese can carry this sort of thing off - Shonen Knife perhaps or Toquiwa - but they would have fun with it. Toru and Kojima attempt a sincere copy of a song they clearly love - ending up with something that comes off as maudlin at best.

But just who are Toru and Kojima? Well, what sounds like a solitary Japanese Beach Boys fan doing bad karaoke in his bedroom is pretty much exactly that: it appears that Toru and Kajima - who released two Brian Wilson-inspired albums, Smiley and Pot Sounds (oh, stop! My sides are splitting!) - is one person, Toru Kohjima. A nascent Wilson himself, Toru plays guitar, bass, keyboards and percussion as well as handling the vocal and production duties on his two releases. Apart from the occasional friend who adds backing vocals or the odd keyboard or bass lick here and there its all him. His two albums were collected together on one cd in 1997, complete with Beach Boys inspired artwork.

Smiley and Pot Sounds are available, in their entirety, for download at the always brilliant WFMU - grab them if you dare and wonder at Toru's interpretation of such classics as Wonderful, Don't Worry Baby, Surfer Girl and a couple of truly horrible originals....but for now enjoy Toru and Kojima and God Only Knows

Posted by Darryl W. Bullock at 08:14 4 comments: Links to this post Hailing from the squalid (I promise you, no matter how much they’ve spent on the place in recent years, there’s no more apt word to describe what was, in the 1990s, the drug capitol of the west country) seaside resort of Weston-super-Mare, the Fat Doormen (Jonsey, Bezi, Rob and Mark) released a brace of 45s on the local Big fat Productions label.

Apparently a group of real nightclub bouncers (they must have been very short of work in WSM) their first release, We Hear You Knocking/Rubber Ball (Bouncy Bouncers) rewrote – in a Barron Knights style – a couple of former hits to include some rather poor ‘jokes’ and references to life working the doors. Arranged and produced by Brian Monk and Chris Merrick, issued with the catalogue number BFP2 (I can find no evidence of a BFP 1) and recorded at the now long-gone Horizon West studio, the follow up Kristmas Krackers (credited to the Fat Doormen featuring Colin and the DJ All Stars, BFP 3) like its predecessor also failed to ignite the charts. The B-side of this second single was performed, not by the Fat Doormen, but by one Barry C Bubear – born in Hendon in 1931 but who sadly passed away in Weston in 2009.

There’s not a lot else I can tell you about the Fat Doormen, but I can give you some more info about the man behind this project, Chris Merrick. Now working in ad sales for for Tenerife’s Oasis FM radio station, Chris formed his first band when he was still at school. Turning professional at the age of 18, he has toured with bands throughout Europe, Dubai and Malaysia and has featured on a number of recordings throughout his career.

When the session work stopped coming, Chris became a music teacher in Weston-super-Mare, managing a night club in the evenings (which, no doubt, inspired him to create the Fat Doormen), worked as a DJ and presented shows for local radio station Orchard FM.

Shortly after the Fat Doormen singles were issued Chris moved to Tenerife, where he started working for a local newspaper, soon becoming sales manager for the Holiday Gazette magazine before joining Oasis FM in August 1997 as a part-time presenter. He has since joined Oasis as a full-time member of their sales team. Sunny Tenerife is a long, long way from the mud and rain of WSM, and I’m sure that Chris would be happy to consign his involvement with the Fat Doormen to the past along with the terrible weather…however here the World’s Worst Records would like to remind him of his brief brush with infamy.

Enjoy, then, the Fat Doormen, and their first 45 We Hear You Knocking

Posted by Darryl W. Bullock at 07:32 2 comments: Links to this post 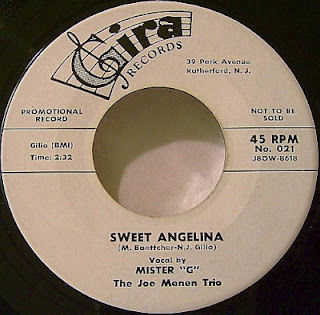 Happy 2013 everybody! To kick off my seventh year of blogging, here’s a fun little thing I picked up recently on Ebay: Sweet Angelina by Mister “G” and the Joe Menen Trio.

This 45, which appears to date from 1958, was issued by the Gira record label, based in Rutherford, New Jersey. Started as little more than a vanity project in 1953, all of the early releases on Gira were written by the company’s owner Nicholas Joseph Gilio and issued exclusively as 78s, most of which were marked ‘not for sale’ or similar. The artist on the majority of these early releases was Jo Ann Lear, a jobbing singer who also cut sides for another New Jersey-based custom/vanity/song-poem outfit, the appropriately named Vanity records, which debuted in 1952.


By the time Gira began to produce 45s it seems like Nick Gilio had gotten into the song-poem game: every song on every disc I’ve discovered so far (apart from one, written and performed by Harold Bailey and the Country Drifters) was co-written by Gilio and another songwriter, and several of them were performed by Mister “G” – a paper-thin pseudonym for Nicholas Gilio himself.

Shades of Lew Tobin or Ted Rosen methinks. Or perhaps Norridge Mayhams? For, like Norris the Troubadour, Nicholas Gilio had one brief stab at fame – when he managed to get several of his songs recorded by the actress and singer Lorry Raine: she released Laugh, Laugh, Laugh and Gi-Gi-Gi-Gira Con Me on Dot in 1955 and also recorded his compositions What Would I Do? (issued as the B-side of her 45 Love Me Tonight, also on Dot; put out by London in the UK) and I'll Tell the World I Love You, issued by Advance Records in 1956. What Would I Do was also featured, performed by Raine, in the short film Champ Butler Sings. Incidentally, the Advance company that issued the Lorry Raine?Nick Gilio 78 was not the same as the song-poem outfit run by Lee Hudson; this particular company was run by Lorry's manager, Tim Gayle.

Gilio had been trying to get his songs recorded for at least a decade when Dot bit, but his brief period working with Lorry Raine appears to have been the sole source of his mainstream success. Old Nick certainly didn't mind spending money in his effort to find fame, paying for half page adverts in Billboard to promote his releases and clearly not stinting on the arrangements for his productions. But that voice! How could anyone have ever believed that Nick had the makings of a hit vocalist?


If anyone has any further info on Nicholas Gilio or the Gira company I’d love to know more. I'm aware that he also ran the rather grandly-named Gilio School of Music in Rutherford, and that between 1963-67 Gilio Music sponsored the Rutherford Little League team but that's about it. Still, for now, enjoy Sweet Angelina by Mister “G” and the Joe Menen Trio.

Posted by Darryl W. Bullock at 08:46 2 comments: Links to this post