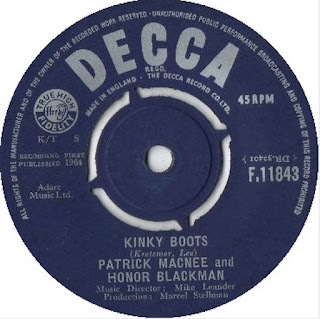 Sadly, at the ripe old age of 93, the TV legend Patrick Macnee - best known as John Steed in the long-running drama the Avengers - passed away yesterday.

Daniel Patrick Macnee (6 February 1922 – 25 June 2015) was born in London. Descended from the Earls of Huntingdon, his father trained race horses and his mother was a lesbian, whose partner was referred to by Macnee as "Uncle Evelyn". Educated at Eton, where he met the future Goon Show star Michael Bentine, he was one of the honour guard for King George V during the late monarch’s lying in state at St George's Chapel in 1936. Legend has it that he was expelled from Eton for selling pornography and being a bookmaker for his fellow students.

He began acting while at school, appearing in Henry V at the age of 11, with the later Sir Christopher Lee as the Dauphin. Macnee joined the Royal Navy during WWII, becoming a navigator on torpedo boats in the English Channel and North Sea and, after the war ended, he returned to acting, gaining valuable experience onstage in London’s West End before accepting some minor film roles, including that of Young Marley in Alastair Sim’s classic version of A Christmas Carol. But when the call came from David Greene, a director friend at CBC in Toronto, he left England within 48 hours and spent much of his adult life in Canada and the United States. Whilst in America Macnee appeared in supporting roles in a number of films, notably Laurence Olivier's Hamlet (1948), in Gene Kelly’s Les Girls (1957), with Anthony Quayle in the war film The Battle of the River Plate (1956) as well as playing dozens of small parts in American and Canadian television and theatre.

When working in London on the documentary series The Valiant Years (based on the World War II memoirs of Winston Churchill), Macnee was offered a part originally known as Jonathan Steed in a new TV series called The Avengers. Originally conceived as a vehicle for Ian Hendry, who played the lead role of Dr. David Keel, Macnee was to play his assistant, but moved into the lead role after Hendry's departure at the end of the first season.

Macnee's other significant roles include Sir Godfrey Tibbett in the James Bond film A View to a Kill, This Is Spinal Tap and on TV he appeared in Alias Smith and Jones, Hart to Hart, Columbo, Magnum PI, Murder She Wrote, Battlestar Galactica, The Love Boat and The Twilight Zone. He made his Broadway debut in Anthony Shaffer's Sleuth in 1972, and has the distinction of playing both Sherlock Holmes and Doctor Watson – the latter with his old friend Christopher Lee.

Back in 1964 he did something quite extraordinary. At the height of his fame he recorded a brace of duets with co-star Honor Blackman – and it’s these recordings we celebrate today.

Originally issued on Decca in the UK (and on London in the US the following year) and reissued twice – in 1983 (on Cherry Red) and in 1990 on Deram (when it reached the UK Top Five), Kinky Boots is a mad, bad, camp classic – a truly great record and one of my all-time favourites. I hadn’t heard it until the Cherry Red reissue, but fell in love with it then and there and, more than 30 years on, still absolutely adore it. Same goes for the B-side, the excruciating Let’s Keep It Friendly, a stilly song and a silly performance – but utterly beguiling.

At the same time as this 45 was issued Blackman also released her only album, Everything I've Got, although neither side of the single was originally included (the A-side was included on some later reissues). Everything I've Got is a not-terribly-good album on which Pussy Galore attempts a handful of torch songs, a few lounge standards and a cover of the Lennon-McCartney song World Without Love. The album was reissued by Cherry Red in 1983.

Here are both sides of this fabulous 45, plus a track from Honor's album, Men Will Deceive You. 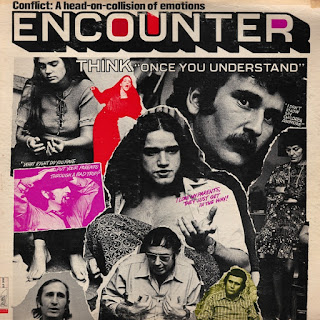 Digging through my audio files, looking for material I haven’t featured here before, I found these – tracks I snapped up in 2009 from one of the most peculiar albums I had ever encountered and promptly forgot about. Until now, that is.

Issued in 1971, Encounter: Once You Understand is a peculiar moral fable, a mix of hippy, happy-clappy Christian youth camp songs and poorly-recorded, poorly acted-out vignettes featuring parents of teens wringing their hands over their kids’ drug use. Credited to ‘Think’, the album was written and produced by Lou Stallman and Bob Susser. Bob Susser (born Robert Howard Susser, July 18, 1942) is an award winning songwriter, producer and performer, best known for children's music, and has sold over 5 million children's albums. Writer and arranger Stallman’s credits stretch back to the early 1950s (he co-wrote the 1954 single I Was Meant For You by The Four Knights) and has had songs recorded by Dion, Perry Como, Tommy Steele, Marty Wilde, the 4 Seasons and dozens of others. 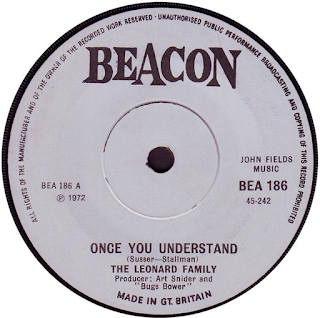 The year after the album appeared the opening track was covered by a Toronto-based act called The Leonard Family, was issued in the US as a single and charted – leading Beacon records in the UK to license it for release too. ‘Now and again a record like this comes along’, the Beacon press release reads . ‘There was Deck of Cards and The Deal to name but two. Both registered.’ Interesting that they should choose to compare this rubbish to two of the worst records ever released!

The Leonard Family cover is pretty much identical, although - for me at least - the original is a little more histrionic and crazed. The opening track has been sampled by a number of rap and hip-hop acts, including Biz Markie and De La Soul.

Here are a brace of tracks from Encounter: Once You Understand, the opening track and the wonderfully loopy Gather, plus both sides of the Leonard Family 45, Once You Understand and It Won’t Happen Again. If you can bear it, the whole album is available at WFMU.

Apologies, but Divshare is down yet again! I'll update these links as soon as possible. 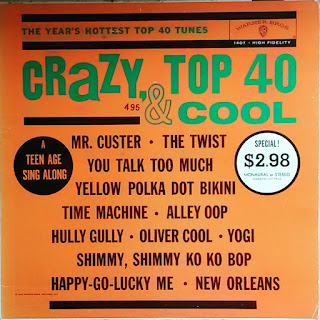 Issued by Warner Bros in the US in 1960, Crazy, Top 40 & Cool is a precursor – of a kind – to those awful Top of the Pops albums that filled supermarket shelves in the 60s and 70s here in Britain (and consequently fill the shelves of charity shops today).

The premise is pretty straightforward, get a bunch of studio musicians together, add in a few sound-alike vocalists and a gaggle of enthusiastic teenagers and get them to record a selection of current chart hits: issue it at a budget price that every parent can afford and it back and watch the cash come in.

Only what we get here is nothing short of an abomination: the gaggle of teenagers are loud, shrieky, off key and annoying; the song selection is muddled - it's pretty much all novelty hits that would appeal to either the very young or the very old, hardly teenage fodder - and the end result would more likely drive people from your home than encourage your friends and neighbours to stay and party. Subtitled 'fun for all the family - the new party craze', the whole sorry mess was put together by a faceless collection of producers and publishers using the epithet Free-Sac Productions: Free-Sac were credited as publishers of the 1959 45 Tres Chic by Geoff Gilmore and the Sheiks.

The vocalist on this disc is one Dick Kerr - or rather the disc 'features' Dick Kerr and the Sing-Along Teen-Agers. Kerr, a renowned singer, comedian and impressionist who sadly died in 2010 at the age of 80 after a long battle with cancer, sang at venues in his home area of Turtle Creek, and Lawrenceville, Pennsylvania as a boy. Leaving high school, he joined the United States Air Force, where he was discovered by Horace Heidt, who was looking for a fourth singer for his shows and already had a young man from each of the other branches of military service. Kerr founded the Air Force Tops in Blue entertainment programme, which still exists today under another name.

Kerr performed at Carnegie Hall with Heidt and at every famous showplace in America during the seven years they worked together. Heidt built a show around a group of performers that included Kerr, and they filmed a one-hour television pilot in Hollywood. Kerr worked in theatres, radio, television, Las Vegas and top hotels, nightclubs and concert halls around America; he performed in Europe and Asia and entertained troops stationed overseas.

Anyway, here’s a brace of cuts from the album: an awful teenage sing-along version of Chubby Checker’s massive hit The Twist, and a dreadful cover of the Ivy Three’s dreadful novelty disc Yogi. 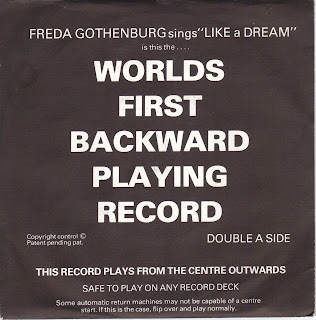 Only one track today principally because – on this particular record – the same track appears on both sides. The only difference between the two versions of Like a Dream is that, on the A-side of the disc, the song plays backwards!

The first (and, I believe, only) release on G.H.M Records, Freda Gothenburg’s Like A Dream sounds like a reject from an amateur production of The Rocky Horror Show or similar: I can certainly hear major similarities between Freda’s performance and the vocal technique employed by Little Nell. G.H.M stood for Mike Gatton, Roy Hurley and Ken Murray, the writers of the song and the men who came up with the idea of a backwards-playing disc. Issued in 1979, other credits for the trio of Gatton, Hurley and Murray include the songs Late Night Lady (recorded by Wild Willy Barrett the same year) and What Hit Me (recorded by UK act Rich Gypsy in 1980). As a duo, Gatton and Murray wrote several songs on Barrett’s debut solo album Call of the Wild (Polydor, again 1979).

Ken Murray now runs his own recording studio and song writing business in Rochester, Kent. Mike Gatton, who sadly was diagnosed with terminal cancer last year, recently wrote a musical for schoolchildren, Delahaye the Dog, which focuses on the issue of bullying and its impact on victims. Bassist, sound engineer and songwriter Roy Hurley is still gigging today, as part of the four-piece band Elliot’s Sleeping.

Freda Gothenburg was a studio backing singer, and today is pursuing a career as a writer and proof reader; Like A Dream was her only release under her own name. It’s an awful record, but this is not her fault: she was clearly encouraged to sing the song as playfully and exaggeratedly as she could. As she herself put it when responding to a post on http://musiconvinyl.blogspot.co.uk/: “I reserved my 'good' singing for the session work I did. It was a blast making this record…even if it doesn't have listen appeal!” I’m unsure who the Charlie-boy mentioned in the song is (if indeed it is meant to be anyone): it could be Prince Charles, who in 1979 was still, young, free and single and seen by the press as the world’s most eligible bachelor (it would be two years before he would marry Diana Spencer), or Charlie Townsend, the forever-unseen titular star of Charlie’s Angels.