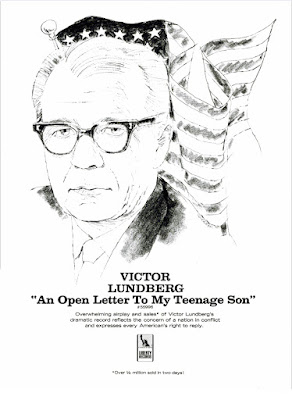 Welcome to the 345th WWR post - and the last this year before we begin our annual Christmas cavalcade.

Born in Grand Rapids, Michigan (September 2, 1923) Victor Lundberg was an American radio personality and newscaster best known for his spoken-word record An Open Letter To My Teenage Son, which provided him with a US Top 10 hit in 1967.

The record, written by Robert Thompson, imagines a stern father talking to his teenage son. Whilst the Battle Hymn of the Republic plays in the background, Lundberg touches on such topics as long hair, the existence of God, the Vietnam War, and the expectation that all good Americans should fight for the freedom of their country. The song ends with Lundberg telling his son that, if the teen decides to burn his draft card then he should also burn his ‘birth certificate at the same time. From that moment on, I have no son’. That denouement is slightly at odds with Lundberg’s own liberal views and with the song’s earlier line that ‘your mother will love you no matter what you do, because she is a woman; and I love you too, son’.

The B-side My Buddy Carl, is more representative of Lundberg, and hides a plea for equal rights for people of all colours within a similar, Vietnam-themed soliloquy.

An Open Letter became a surprise hit, making number 10 on the Billboard Hot 100, number six on Cash Box and selling over one million copies, earning a gold disc and a Grammy nomination for Best Spoken Word Recording (it lost to Senator Everett McKinley Dirksen's similar Gallant Men). Encouraged by this success, Liberty released an entire album of Lundberg's musings, also entitled An Open Letter although that failed to chart. In January 1968 Life magazine printed a scathing review of Lundberg’s disc, dismissing it as ‘an item that anybody can hate’. 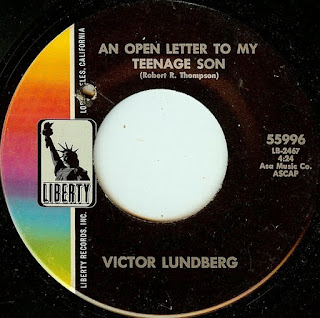 Victor Lundberg who, according to an article in The Village Voice  (November 16, 1967) spent WWII working for the Psychological Warfare Department (presumably the joint Anglo-American Psychological Warfare Division) died on February 14, 1990. His daughter Terri (commenting on www.unpleasant.org in 2006), stated that Lundberg ‘died a drunken man on state aid in Michigan alone in a run down apartment’. There was no love lost between Lundberg and his family: ‘He was estranged from all of his children and never provided financial or emotional support to any of them,’ Terri wrote.

Unsurprisingly there were a good number of  "response" records to An Open Letter To My Teenage Son, and I’ve included three of the best here for you today: Keith Gordon's A Teenager's Answer, A Teenager's Open Letter To His Father by Robert Tamlin, and Open Letter To The Older Generation by radio and television personality and the World's Oldest Living Teenager Dick Clark.

Note: I'm trying out a new MP3 player and download site: click on the track to stream the audio or click on the Tindeck logo to be taken to the download page. Let me know how you get on with it!

Welcome To My Life Tattoo 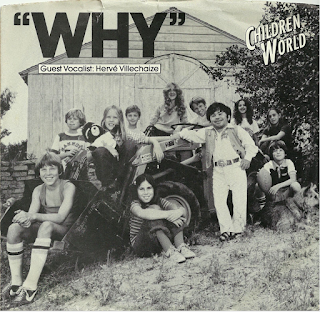 The diminutive actor best known for his roles as Nick-Nack in the James Bond film The Man with the Golden Gun (1974) and as Tattoo in the hit TV series Fantasy Island, Herve Villechaize was born on April 23, 1943 in Nazi-occupied Paris to his English mother Evelyn and French father André Villechaize, a doctor. At a young age he was diagnosed with an acute thyroid condition, resulting in dwarfism and leaving him with a full-grown height of just under 4 ft tall.

A gifted artist, in 1959 he entered the École des Beaux-Arts, two years later becoming the youngest artist to ever have his work displayed in the Museum of Paris. In 1964 he left France for the USA, settling in New York, and taught himself English by watching television. He continued to work as as an artist and photographer, and began acting in Off Broadway productions. He even did some modelling for National Lampoon magazine.

In 1974, after appearing in Oliver Stone’s debut film Seizure he got his big break, landing the role of the tiny villain Nick-Nack in The Man with the Golden Gun. A move to California, where he met Aaron Spelling, resulted in his being cast opposite Ricardo Montalban in a 1977 ABC Movie of the Week pilot called Fantasy Island. A sequel - Return to Fantasy Island - followed in 1978 and a series was soon commissioned. Fantasy Island went on to run for six seasons from 1978-1983, making a household name out of Herve’s character Tattoo and his catchphrase ‘The plane! The plane!’

Unfortunately Herve’s newly found fame – and reported $25,000 an episode pay cheque – would also lead to his downfall. He met actress Donna Camille on the set and in September 1980 she became his second wife. The marriage quickly turned sour, with Donna filing for divorce in December 1981. A little over a year later, after demanding the same money for his role on Fantasy Island as front man Montalban, ABC dropped Herve from the show.

Herve quickly found himself short of money and was forced to sell his 2.5-acre and move into a rented house in North Hollywood. It was reported that he would often consume two bottles of wine in a single night – a huge amount for such a diminutive man. His health was suffering too: in increasing pain from internal organs that were too large for his body, Herve was forced to take a cocktail of pills each day to alleviate the symptoms. Unsurprisingly he began to suffer from frequent bouts of depression.

In the early morning of September 4, 1993 Kathy Self - Herve's friend of 14 years - found his body in the yard of his house. Herve had written a suicide note and, ghoulishly, also made and audio recording of his last moments. After saying goodbye to Kathy he aimed his gun into a pillow placed against his chest and pulled the trigger. The tape recorder caught the sound of Herve cocking the pistol and of Kathy arriving on the scene. She rushed him to hospital where he was declared deceased. He was 50 years old. Herve's body was cremated and the ashes scattered at sea. A sad, sad end.

However he did leave us with a legacy. Luckily for us Herve made several stabs at a recording career: in 1980 he released the single Why/When a Child is Born. Both of these tracks also featured on the charity album Children of the World: the Time is Now…and both of these tracks are included here for you now.

Email ThisBlogThis!Share to TwitterShare to FacebookShare to Pinterest
Labels: Children of the World, Fantasy Island, Herve Villechaize, When A Child Is Born, Why 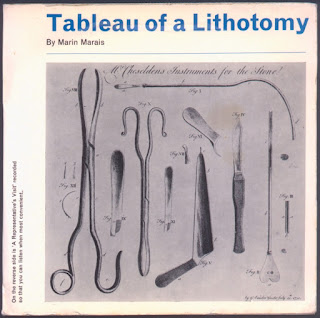 I’m massively indebted to David Noades and WFMU for rediscovering this curio back in 2007, and to eBay and Discogs for helping me land a copy of my own!

It’s not often that you get to listen to the sound of a surgical procedure put to music, but that’s exactly what the Dutch-based pharmaceutical company Norgine (established way back in 1906) decided its’ UK sales force needed to help them sell their laxatives to chemists’ shops around the country in the mid-1960s.

Livingstone Recordings, a short-lived London-based label that specialised in religious recordings and had previously put out an album by Billy Graham, manufactured the disc.  The B-side features A Representatives Visit, an audio vignette which features a Norgine salesman selling Normacol to a GP: ‘can we begin by talking about constipation?’ Ugh! ‘Now let’s jump from the bowel to the stomach’…

But it is the A-side that’s the pip.

Tableau of a Lithotomy was written by the 17th century French composer Marin Marais. A busy man, as well as writing several books of instrumental music and being a court-appointed musician to the king, he also managed to find the time to sire 19 children. The piece, as described on the gatefold sleeve of the disc, is ‘a musical description of a bladder operation’ It appears that Marais intended that Tableau of a Lithotomy would demonstrate the versatility of the viol (also known as the Viola da Gamba), a bowed string instrument similar to the cello.

'Some 250 years ago a French composer, Marin Marais, wrote - to the best of our knowledge - the only musical description of a surgical operation. He called it "Le tableau de l'operation de la taille" or "Tableau of a Lithotomy". This most unusual offering was taken from an old edition of the Library of the Conservatory of Music in Paris; it had not previously been performed in modern times.

Marin Morais (1656-1728) - the greatest player of the viola de gamba of his time - was a pupil of Lulli and a soloist in the Royal Chamber Orchestra at the time of Louis XIV. He wrote profusely and brilliantly for the viola da gamba, but his compositions for this 7-stringed instrument are in such complicated polyphonic style that they defy transcription for the 4-stringed violin-cello and today, unfortunately all but forgotten.

Our recording was made by the famous Dutch viola da gamba player Carel Boomkamp, accompanied by the distinguished harpsichordist, Millicent Silver.

The verbal commentary which you will hear with the music, announcing the phases of the operation as it progresses, is based on the composer’s original annotations, which were intended to accompany the music’.

A lithotomy (from Greek "lithos" (stone) and "tomos" (cut)), is a surgical method for removal of stones formed inside organs such as the kidneys, bladder, and gallbladder, that cannot exit naturally through the urinary system.

Apologies for the poor quality of the B-side: I'll replace the link after I've converted my own copy.

Email ThisBlogThis!Share to TwitterShare to FacebookShare to Pinterest
Labels: A Representatives Visit, Marin Morais, Tableau of a Lithotomy, Wfmu

Cry Me A Loser 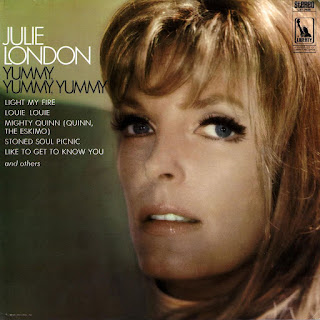 There is absolutely no excuse for this.

Yummy Yummy Yummy by the Ohio Express is one of the most diabolical bubblegum hits ever inflicted on the world – a truly wretched record (although, to be fair, it’s not quite as abominable as the follow up Chewy Chewy). So why on earth would the wonderful Julie London – the angel who crooned the definitive version of  Cry me A River – decide to cover it?

You can’t really blame the members of Ohio Express, as the band didn’t really exist. ‘They’ were a studio project put together by Jerry Kasenetz's and Jeffrey Katz's Super K Productions with an ever-changing line-up: at one time Ohio Express featured the four men who would go on to form 10CC. Miss London, however, should have known better.

Born Julie Peck on September 26, 1926 in Santa Rosa, California, Julie London began acting in movies in 1944. Ten years later the sultry singer signed to Liberty Records and issued her first album, Julie Is her Name, in December 1955. Here first four albums were all top 20 hits in the US. She died in 2000, having never fully recovered from a stroke suffered some five years earlier.

Released in 1969 – as her 29th and last LP for Liberty - London’s album Yummy Yummy Yummy is a misguided hotch-potch of contemporary covers, including Light My Fire, And I Love Her (as And I Love Him), garage band favourite Louie Louie and Bob Dylan’s Quinn the Eskimo (The Mighty Quinn).

It’s beyond ridiculous. And that’s why I’m including it three of the tracks from this awful album here, for your delectation.