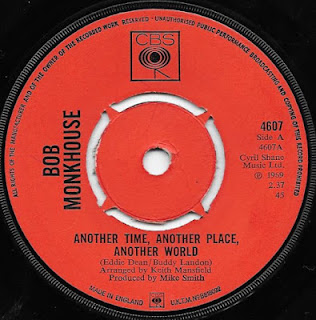 Bob Monkhouse: does he need an introduction? Game show host, presenter, comedian, comedy scriptwriter and advertising spectre (he appeared, posthumously, in an award-winning ad campaign for Prostate Cancer Awareness four years after his own death from the disease): in a career that spanned more than 50 years he did pretty much everything and became a national institution in the process.

In 1968 CBS in Britain signed Bob, issuing the 45 I Remember Natalie, a minor hit reaching Number 54 in March 1969. A pleasant but unspectacular pop song, the disc is more notable for its B-side – In My Dream World - which was co-written by Mark ‘Excerpt From a Teenage Opera’ Wirtz. Wirtz also arranged and conducted the orchestra on both sides.

CBS followed this with the less-than stellar coupling I present for you today. Produced by Mike Smith, the man who wanted to sign The Beatles to Decca (but who was overruled by his boss Dick Rowe), Another Time, Another Place, Another World is a dull-as-ditchwater ballad which Bob should probably have stayed away from. The flip, When I Found You is slightly less offensive; a slow and undemanding waltz which Bob’s voice can just about manage. Bob co-wrote the B-side, and he and co-conspirator Keith Mansfield came up with something that wouldn’t be too taxing for his limited range. I Remember Natalie had some redeeming features: this does not. It’s typical of so much other TV tie-in fodder: uninspired and utterly disposable.

Unsurprisingly there was no third single. The next time the public would hear Bob’s singing voice (apart from his own occasional outbursts on his many TV shows) would be when he performed the theme tune to the dire BBC sitcom You Rang M’Lord. He went back to what he did best, presenting game shows including The Golden Shot, Celebrity Squares, Wipeout, Family Fortunes, Opportunity Knocks and countless others. Like many of the old guard – including his friend Frankie Howerd – his comedy career went through a renaissance in the 1980s when he returned to his first love, stand up to excellent reviews.

Email ThisBlogThis!Share to TwitterShare to FacebookShare to Pinterest
Labels: Another Time Another Place Another World, Bob Monkhouse, I remember Natalie, In My Dream World, Mark Wirtz, The Beatles, When I Found You

The Testament According to Albert DeSalvo 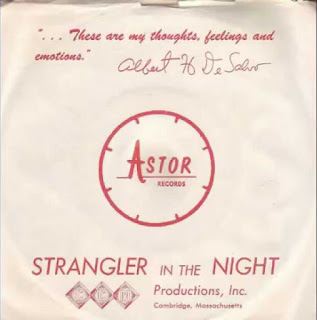 As Mick Jagger once asked: ‘Have you heard about the Boston Strangler?’

Between 1962 and 1964 the city of Boston was terrorised by an ultra-violent serial killer, originally dubbed The Mad Strangler, but more popularly known (thanks to a series of press articles in 1963) as the Boston Strangler. In all 13 single women between the ages of 19 and 85 were murdered: most were sexually assaulted and strangled in their apartments by what was assumed to be one man.

In late 1964, in addition to the Strangler murders, the police were also trying to solve a series of rapes committed by a man who had been dubbed the Green Man. After a stranger entered a young woman's home in East Cambridge, tied her to a bed and sexually assaulted her, he left, saying ‘I'm sorry’. Her description led police to identify the assailant as Albert Henry DeSalvo, former naval petty officer and long-time petty criminal. When his photo was published, many women identified him as the man who had assaulted them. DeSalvo was not originally connected with the murders, but he gave a detailed confession to a cellmate George Nassar and, under hypnosis, to Doctor William Joseph Bryan, Jr., after he was charged with rape. However, there was no physical evidence to substantiate his confession and, because of this, he was tried for earlier, unrelated crimes of robbery and sexual offences.

After DeSalvo was apprehended, news reporter and author Dick Levitan (who worked for Boston’s talk radio station WEEI), was one of the very few reporters allowed to interview him. In a very creepy twist, Levitan was paid an undisclosed sum by Astor Records to record himself narrating DeSalvo’s words (rumour has it that the company also paid DeSalvo $50), putting him together with the local Beatles-influenced beat group The Bugs to produce Strangler in the Night. The Bugs also provided the b-side, Albert, Albert, about DeSalvo’s crime spree. The sleeve for the single reads: “...These are my thoughts, feelings and emotions.” Albert H. DeSalvo. These days it sells (well, people advertise copies for sale) for anything from $20 to $200.

The true identity of the murderer of the 13 women has been the cause of much debate over the years. Although DeSalvo copped for the crimes he was never tried for them and consequently never found guilty. He was found stabbed to death in the infirmary of Walpole State prison in 1973. 40 years later Boston law enforcement officials announced that DNA evidence had linked DeSalvo to 19-year-old Mary Sullivan, the last of the Boston Strangler’s victims. DeSalvo's remains were exhumed, and further DNA tests proved that the seminal fluid recovered at the scene of Mary Sullivan's 1964 murder was, in fact, DeSalvo’s.

Here are both sides of this infamous recording. 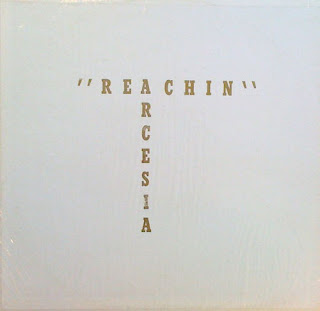 Born John Anthony Arcesi (pronounced 'RCC') in Sayre, Pennsylvania in February 1917 of Italian immigrant parents, John Arcesi turned professional after winning a talent contest organised by Blackstone the Magician (Harry Blackstone, Sr.) when he was just 10 years old. Singing locally wherever he could get a gig in 1933, after a fire almost destroyed the family home, he decided to travel to NYC in the hope of becoming a band vocalist like his idols Bing Crosby and Russ Columbo.

In 1934 he made his first professional recordings for the Columbia label as singer for Lud Gluskin and his Orchestra, before moving to Bluebird as singer for Louis 'King' Garcia in 1936. John took a job at the Mills Music Publishing Company, based in the famous Brill Building, as a song demonstrator and office assistant during the day, singing in clubs around New York at night. When  it was suggested to him that the name Arcesi sounded too ethnic he changed it, recording as Don Darcy from 1935–45, and Johnny Darcy from 1946-1950.

For several years Darcy sang with Joe Venuti's Orchestra and he recorded with  a number of different acts on an equal number of different labels until, in 1952, he was signed as a featured singer by Capitol Records. Reverting to his original birth name, he garnered several column inches when, while performing the song Lost In Your Love in Las Vegas he put a young woman by the name of Ariel Edmunson in to an hypnotic trance which supposedly lasted some 39 hours. It was a publicity stunt, of course, but it worked.

John's first single release with Capitol was Wild Honey/Moonlight Brings Memories. Capitol ran several full pages ads in Billboard magazine promoting the disc and even sent deejays jars of honey in the hope of gaining a few spins. Reviews were not fooled though: Billboard’s Bill Smith wrote that he used ‘a lot of artificial poses that are glaringly apparent and studied. His singing style is very slow and very deliberate. In fact he comes to a dead stop at the end of each line in such a manner that time and again it looked like he blew the lyrics.’ When he tried to pull yet another silly stunt to promote his latest record Smith dismissed it as so ‘corny that it had plant written all over it. Based on voice quality alone Arcesi might make it, but the build-ups, stunts and tricky arrangements dreamed up for him are not going to help very much. The dough could be used to better advantage teaching him how to sell’. 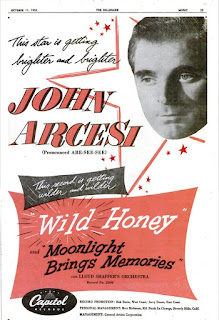 Despite all that Capitol continued to have faith: in March 1953 Arcesi recorded four sides with Nelson Riddle, three written by Arcesi himself, and he was voted third most promising 'new singer' by Billboard, following Al Martino and Steve Lawrence. Sadly fame was not to be found, and in spite of further name changes (including Tony Conti and Chick Johnson) Arcesi’s fifteen minutes were already up. By the beginning of the 60s he had all-but retired.

Then, in 1972, an album entitled Reachin' Arcesia was released by the tiny Alpha Records. Just 300 copies of the album were pressed (the same company also issued a 45 by John Arcesi, It's All According/Love is Like A Mountain sometime around 1968), although it has been widely pirated since. A further 45  Reaching/Pictures In My Window was released in 1979 by the Honolulu-based Orpheus-Alephia label (Arcesi moved to the island in 1974). Confusingly Reaching and Love is Like A Mountain are the same song: even more confusing is that the album bears absolutely no relation to anything Arcesi recorded during his big band or ballad singer years.

The eleven songs on Reachin' Arcesia are almost beyond description; ridiculous and overblown, kind of psychedelic but with garage-punk production values, it’s as if Jim Morrison had never died. It is, frankly, utterly bizarre and utterly beguiling. Having made his masterwork, John Arcesi would never record again, instead he spent the last years of his life painting and dealing in art.

Here is a brace of cuts from the awesome, jaw-dropping Reachin' Arcesia: The Leaf and the preposterous Mechanical Doll.