Who Is Tilted Tim? 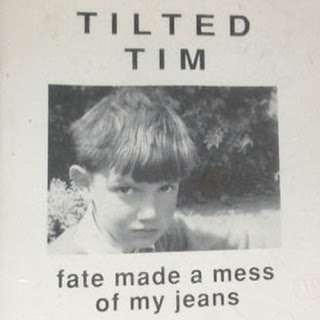 Who was (or possibly still is) Tilted Tim?

Recorded and issued in 1992, Fate Has Made a Mess of My Jeans is the only album thus far from Tilted Tim. Sadly there’s very little I can tell you about Tim, apart from that he was based in North Harrow, and that his main business seems to have been software publishing.

Fate Has Made a Mess of My Jeans contains 13 tracks of keyboard-led oddness with the eponymous Tim handling synth, drum machine and vocals, accompanied on occasion by his friends Superstar Bob Green (acoustic and bass guitars), Andy Hewitt (quantised piano), Adam Shea (‘twiddly guitar’) and Dave ‘Spiggy’ Miller (electric guitar and ‘sha-la-las’). Try to imagine something somewhere between early, Irene and Mavis-period Blancmange and the wonderful Mavin James and you'll get the idea. The late Andy Hewitt who was, for many years, closely involved with community radio station Radio Harrow, produced the whole thing. In February 2009 Radio Harrow named their new editing suite the Andy Hewitt Media Suite in his memory.

In 1993 Exposed magazine issued a compilation CD featuring the album’s opening track Hi, I’m Tilted. And that’s all I’ve got! If anyone knows anything else about Tim please do let me know. For those interested or intrigued enough you can find the whole album at the wonderful Mr Weird and Wacky: one of that blog's followers, Harvey Gold, doctored the sleeve image (above) to make it more usable. The's a copy for sale on Discogs as I type this if you really need it!

For now here are a couple of my favourite tracks from the album, Z17 and My New Career.

Email ThisBlogThis!Share to TwitterShare to FacebookShare to Pinterest
Labels: Blancmange, Fate Has Made a Mess of My Jeans, Mavin James, My New Career, Tilted Tim, Z17 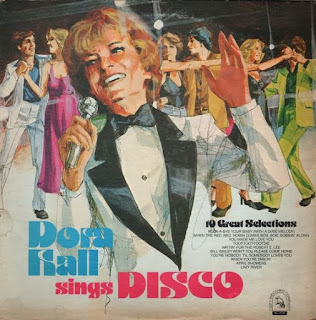 What a fascinating, if frustratingly difficult to research, character Dora Hall is. The woman released close on 20 albums and over 100 45s in around 15 years (she seems to have been most active between 1963 and 1978), featured in several TV specials and to all intents and purposes coulda, shoulda, woulda been a big star. But she wasn’t. Despite what middle America may have been spoon-fed to believe the only reason that Dorothy Myrtle Donahoe Hulseman had a career at all is that she married well.

Born in 1900 (or possibly earlier, I’ve seen one review from 1975 that claimed she was in her 80s at that point) she had been hoofing (and singing) from an early age – apparently starting out as part of a song and dance act when she was just 10 years old. Dora then joined the female vocal trio the Harmony Maids (a different act from the 10-piece all woman jazz orchestra of the same name, popular during the 20s & 30s), but retired at the grand old age of 18 when she wed.

Her husband was Leo Hulseman, who worked for the Dixie Cup company. In the 1930s Leo left Dixie and set up his own company, Solo. That paper cone you see people drinking out of at water coolers on TV and in films? That’s a Solo cup. Launching a range of disposable dinnerware, soon Leo and his company – and Dora – were very, very rich. They became richer still when their son Robert came up with the red Solo cup; made from expanded polystyrene this was soon the cup of choice on college campuses, at sports events and even had a hit song written about it. When sales of the red Solo cup were at their height the company was turning over in excess of $1.5 billion a year.

Leo wanted to help Dora realise her dreams of being a star so, after giving him several children and 14 grandchildren, her devoted husband purchased a film production studio and established his own record company – Premore - to help promote her. Hello Faithless, written by established hitmakers Felice and Boudleaux Bryant, was issued in December 1962 and was reviewed in Billboard; they called it a ‘very listenable performance of a catchy novelty effort’. Proving itself a minor hit on local radio, and covered the following year by Rosemary Clooney, the disc was licensed and released in the UK by King Records in 1964. 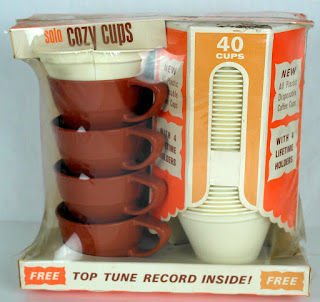 But real success eluded Dora and Leo. Unperturbed, Leo hit on the idea of giving his wife’s recordings away with Solo products. Soon you could buy paper cups and their plastic holders in gift sets with 45s shrinkwrapped to them. Purchasers of other Solo items were encouraged to collect tokens and send them in for ‘top tune’ discs – the adverts never mentioning Dora by name, but offering instead anonymous recordings in various styles, including pop, kiddie, Christian and country. Dora Hall recordings appeared on labels including Premore, Premere, Calamo, Reinbeau and Cozy, all owned and operated by Solo. It must have been heartbreaking for the kid, having sent off for a hit record to have instead a woman in her 60s warbling I’ve Got You Babe.

In 1966, no doubt inspired by Capitol’s success with Mrs. Miller, Dot Records (home of bad music maven Pat Boone) issued Today’s Great Hits!, featuring Dora covering such standards as Downtown (also covered by Mrs. Miller), These Boots Were Made For Walking (also covered by Mrs. Miller)… you can see where I’m going with this, can’t you? The album, arranged and conducted by H.B. Barnum, was recycled/repackaged on a number of occasions by the various Premore/Reinbeau imprints. Leo was not averse to hiring the best musicians in the business to help his wife: as well as working with Barnum (best known for the Judy Street/Soft Cell 45 What and for David McCallum’s Communication), she also recorded with arranger, producer and Academy Award-winning composer Jack Nitzsche, who worked extensively with the Rolling Stones, Neil Young and the Phil Spector stable. Goodness knows how many top musicians are anonymously hiding away on Dora Hall sessions. Could that really be the Four Seasons singing backing vocals on her Give Me Your Heart For Christmas?

With no hit records coming, but plenty of vinyl being given away, Leo decided to launch Dora on to television. She appeared in a number of TV specials, dancing, singing and attempting comedy with a slew of second- and third-rate actors, singers, dancers and comedians including Frank Sinatra Junior, Stubby Kaye and Rosey ‘The Thing with Two Heads’ Grier. One such special, Once Upon a Tour, reputedly set Leo back a cool $400,000. Hour-long TV special Rose on Broadway aired in March 1978 and co-starred Scatman Crothers, Donald O’Connor and the ubiquitous Frankie Junior, and several other ‘sponsored by Solo’ shows appeared over the years.

The difference between Dora and other similar artists is that Dora could actually sing. When she sings kid-friendly songs such as Tony the Pony she’s actually quite charming. Her failings, if you will, become most apparent when she tries to sing pop songs; her vaudeville-trained voice just isn’t right for contemporary music and it’s here she starts to sound ridiculous. And when Dora did Disco… well! Let’s just say Ethel Merman was safe.

Dora died in 1988; Leo left the world the following year. Her career is testament to his love for her.

Posted by Darryl W. Bullock at 07:40 2 comments: Links to this post

Email ThisBlogThis!Share to TwitterShare to FacebookShare to Pinterest
Labels: Communication, David McCallum, Dora Hall, H. B. Barnum, Hoochi-Koochi, Jack Nitzche, Mrs Miller, The Four Seasons, You're Nobody 'Til Somebody Loves You

As I’m sure you are already aware, this weekend sees the final of the 62nd Eurovision Song Contest, the annual celebration of all that is camp, kitsch and ridiculous in music. The Eurovision Song Contest (ESC) was once limited to a few countries in Europe but is now open to just about anyone, including those well-known European states Israel and Australia.

Although it has been going on for longer than anyone involved has been alive, that the voting system has been corrupted by the eastern European and formerly-USSR members all voting for each other and irrespective of the fact that the contest has not launched a significant international star since 1988 (Celine Dion, fact fans), this pointless exercise in foolishness continues to trundle on. It’s no coincidence that the theme tune to the contest is called ‘Tedium’…

The show is a joke; staged in Kiev, this year’s theme ‘celebrate diversity’ has already been urinated all over by the refusal of the Ukrainians to allow the Russian entry – sung by a wheelchair-using former paralympian – to participate. And you already know that half of Europe will vote the United Kingdom’s entry down thanks to Brexit. Hey ho! The occasional bright spot (the fabulous Conchita Wurst putting those homophobic Ruskies in their place, for example) really is lost in a miasma of butter-churning, breast-baring peasants, rubber-masked metalheads, and talentless bimbos and himbos la-la-la-ing while they prance around the stage.

We probably don’t deserve any votes anyway: in recent years the majority of UK entries have been utterly appalling. Who can forget the terrible Jemini, led by convicted fraudster Gemma Abbey? Their out-of-tune rendition of Cry Baby was the first Brit entry to score no points at all, with the group ending up 26th out of the 26 acts performing that year. How about Scooch, the ridiculous, camp as Christmas pseudo flight attendants who wanted you to chow down on their salty nuts (22nd out of 24 entries)? Or the world’s worst rapper Daz Sampson and his worryingly paedophilic Teenage Life (19th out of 24 acts). It’s gotten so bad that we’ve even trundled out ancient plastic surgery disaster Englebert Humperdink, whose off-key vocal on Love Will Set You Free in 2012 was, quite frankly, an embarrassment.

Well, in case you had forgotten here they all are, in all of their glory ESC-headlining stealing glory. 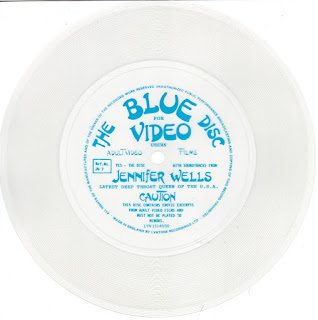 Sit back, relax and enjoy...

A real curio for you today - both sides of an advertising flexidisc put out - judging by the Lyntone matrix number - at some point around 1983/4.

Promising to titillate its audience with 'soundtracks from Jennifer Wells [sic] latest Deep Throat Queen of the USA', what you actually get from The Blue Disc for Video Users is an interminable diatribe from a slightly sleazy Londoner who is trying to sell you pornographic VHS tapes through the post. From an address in Streatham High Road, you too could receive the 'Savile Row service' that Blue Disc Video promised to dispatch to you - under plain wrapper, of course. The address is now home to a delicatessen.

The disc should have been banned under the Trade Descriptions Act; the Jennifer Welles content is virtually incomprehensible. Clearly our narrator is playing one of her movies in the background but I'm damned if I can pick out anything apart from the occasional squeak or yelp, or perhaps a little deep breathing. Apart from the one line that is: 'Sit back, relax and enjoy'. Hah! As if!

Born in 1937, Welles was well in to her 30s when she entered the adult film business, and had already retired by the time that The Blue Disc was issued after marriage to a wealthy fan. Despite a lengthy Internet search I can find no information at all about Blue Disc Video, nor the company's representative, Ms Randy Whitehouse, although I assume this is a pseudonym and was perhaps based on the name of legendary morals crusader Mary Whitehouse.

Still, it is a definite contender for our cabinet of curiosities here at the World's Worst Records, don't you think?