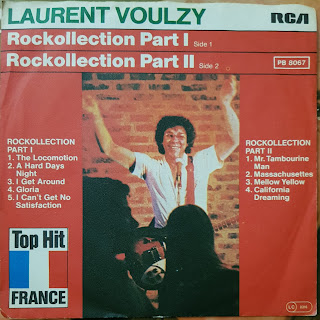 Actually j’adore a lot of French pop, especially yéyé and freakbeat, from the 1960s, but by the mid 70s French pop had seriously lost its way: there was nothing original, inspiring or exciting about it at all. Everything is either boring ballads or derivative disco. In the 60s we had Jacques Dutronc, Nino Ferrer, France Gall, Serge Gainsbourg, Francoise Hardy, Brigitte Bardot and others. The 70s gave us Sheila and B. Devotion (admittedly Spacer is great, but that’s more down to Bernard Edwards and Nile Rogers than to Sheila’s Gallic charm), and Charles Aznovoice.

Laurent Voulzy was born in Paris. He originally led the band Le Temple de Vénus, a group heavily influenced by British psychedelia who were signed to RCA in France, before he joined balladeer Pascal Danel. He worked as his guitarist from 1969 to 1974. More recently he’s recorded with Andrea Corr and Roger Daltrey (not at the same time I hasten to add).

After leaving Danel, Voulzy went solo. And it’s here where we meet him. A big star in la belle France – not Jonny Halliday big, but still a major hit maker – in 1977 he scored an international hit with Rockollection, a song about growing up listening to the radio, which was sung in French (he later re-recorded the song in Spanish) but featured lines, in English, from hit songs of the 1960s.
Split over two sides of a 45, as Rockollection Part 1 and Rockollection Part 2, the grim nostalgia-fest predated Stars on 45 by a couple of years, and is probably at least partly guilty for unleashing the slew of medley discs that invaded the British charts in the early 1980s.

It’s still horrible. The backing vocals are flat and out of tune, and the whole thing is a dull, dreary waste of vinyl. Despite being a perfect example of lazy writing, bizarrely the song proved incredibly popular;, the single became a hit in several countries and sold over four million copies. Voulzy has re-recorded and updated the song several times over the years, and still performs it live to this day.

Here are both sides of his 1977 hit Rockollection. Enjoy!

The Many Sides of Dobie Gillis 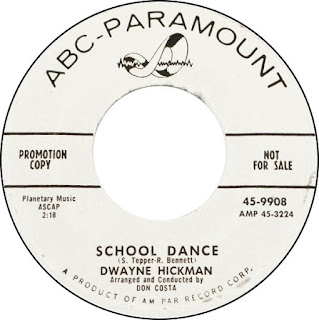 The name of Dwayne Hickman won’t mean much to British TV viewers, but in America Dwayne was a superstar, thanks to his role as the title character in The Many Loves of Dobie Gillis.
Running from 1959 until 1963 (but available in syndication ever since), Dobie Gillis was the first American television programme from a major network to feature teenagers as leading characters; previously, teenagers were only ever portrayed as supporting characters in a family story. Dobie Gillis also broke new ground by depicting the rising teenage counterculture, although even then many of the portrayals were highly stereotypical, the teenage tough, the long-haired beatnik and so on. Still, the show was a huge hit, and co-star Bob Denver, who played Dobie’s best friend, Maynard Krebs, would go on to play Gilligan on the phenomenally successful Gilligan’s Island. It did not matter that the actor playing the teenage Dobie was 25 when the series started, and close on 30 when it finished.
Before landing the starring role in Dobie Gillis, Dwayne had featured (as Chuck) in another hit sitcom, The Bob Cummings Show. Chuck was the break-out character of the series (much like Maynard Krebs would prove to be), and a big hit with the younger viewers. So what do you do when you have a hit on your hands? Why, you drag him (or her) in to a TV studio to cut some recordings, of course!
Dwayne’s first brush with pop fame came courtesy of the faux-rock n’ roll 45 School Dance, backed with Pretty Baby-O. It’s not the worse cash-in you’ll ever hear, but it is fairly appalling. The horrible, screeching backing vocalist do their best to drown Dwayne out, but his flat delivery wins through. Reviewed by Billboard in March 1958, they thought it would be a hit. Sadly, it wasn’t. 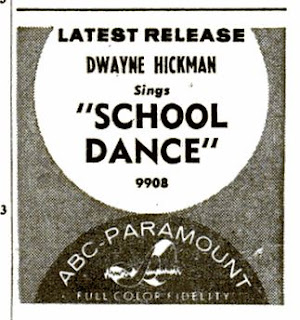 Not that that would upset Dwayne much, for within a year of issuing his first disc he was a bone fide star with his own television show. And what do you do when you’re the producer of a hit TV show with a popular and attractive young man in the starring role on your hands? Why, you drag him in to a TV studio to cut some more recordings, of course! The resultant album, Dobie, finds our Dwayne strolling through a few ineffectual slices of pre-beat boom pop, nothing great and nothing too offensive. Nothing that reached the heights (or plumbs the depths) of his debut.
After Dobie Gillis, Dwayne went on to star in the cult movies How to Stuff a Wild Bikini and Dr Goldfoot and the Bikini Machine with Frankie Avalon and Vincent Price. More recently he popped up as a guest star on episodes of shows including Sister, Sister and Murder She Wrote. Dwayne is also a talented artist, and had been offering his own paintings for sale on his website, although sadly that does not appear to have been updated for a number of years.
Enjoy!
Download SCHOOL here

It’s that time of year again.


Although I’ve never been a huge fan of the camp cheesefest that is the Eurovision Song Contest, this year my Husband and I have decided to have a few friends over, open a bottle of pop and a bag of crisps (well, alright then, a bottle of cava and a packet of grissini... I do have standards, you know) and watch the whole wretched thing from start to Finnish. My money’s on Netta, the Israeli Bjork, with her Chinese lucky cats and her electro chicken song, although I can see Saara Aalto doing well too. With Brexit on the horizon there's no way the UK's entry, Storm, a perfectly passable song performed by SuRie, will take the top spot. A shame, as it's easily one of the best entries this year. Even without Brexit we still would not do well: our position as America's lapdog ensures that most countries will vote against us on principle. It's 21 years since we last won, and since then we've only scored in the top ten three times and taken last place three times as well.

The Eurovision Song Contest is the longest-running international TV song competition in the world. Beginning in 1956, each participating country submits an original song to be performed live, and then casts votes for the other countries’ songs to determine the competition’s winning entry. One of the most watched non-sporting events in the world, with audience figures of up to 600 million internationally, the annual show often falls victim to tactical voting, but with both Russia and Azerbaijan out this year, who will those countries vote for?


This time last year we took a look at some of the worst UK entries of recent years, but in an all-embracing effort to include everyone, ahead of this year’s Eurovision I thought I’d give you a few examples of the worst from some of the other countries involved. By the way, you don’t have to be European to take part, qualifying countries simply have to be members of the European Broadcasting Union, or to have paid a fee to the EBU to allow them to join in. It’s that mercenary.


It’s hard to select the lowlights from a sixty-two year-old festival dedicated to the worst imaginable Europop excesses. There are so many, from rubber-masked rock band Lordi taking the honours in 2006 with Hard Rock Hallelujah, to the ‘comedy’ of Iceland’s Sylvia Night and her abysmal Congratulations, but here are a handful of stinkers that really stand out – for me at least.


From Lithuania comes LT United’s boastful (and factually incorrect) We Are The Winners, easily one of the most annoying and tuneless efforts viewers of the contest have ever had to suffer through. Obviously LT United were not the winners, although they did respectably well, ending in sixth place. Apparently the single went platinum in Lithuania, although to do that it only had to sell 5,000 copies.

Even though it fell at semi-final stage, Ireland’s Dustin the Turkey (a cheaply made puppet being wheeled across the stage in a shopping trolley) deserved to reach the finals with Irlande Douze Pointe, a song which understands exactly what the show is all about. And what can you say about Montenegro’s Rambo Amadeus and Euro Neuro? Apart from WTF, that is.

Finally, seven-time winner Israel seemingly lost the plot with the truly abysmal Ping Pong, and Sameach from the 2000 contest, a bouncy pop tune that rips off Taffy’s 1985 hit I Love My Radio and features a lead singer who could not carry a tune in a bucket, surrounded by a bunch of people jumping around like drunks at a particularly chavvy wedding. It placed twenty-second out of twenty-four entries that year, with a measly seven points. 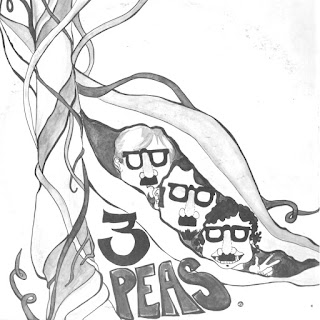 A classic bad album, one that often turns up in the lists of the world’s worst, but one which is seldom heard.


Hailing from Michigan, Three Peas in a Podd (the name on the album sleeve is incorrect) were Dick Wallace, Wild Wally Klejment and Jerome ‘Mr Shop’ Byville, a three-man cabaret band whose members met while attending Wayne State University in Detroit, Michigan. Together from 1968 until 1983, before becoming Three Peas... the trio had also worked together under the names The Dan D Trio, The Wally K Combo and (post album) as Patchwork.


Wild Wally later began using the name Max Effort (love it!). Back in 2008 Max (via WFMU) revealed that he “played the Sanovox on the Three Peas album and provided some of the singing. There were two vocalists; I was the lesser quality of the two being hampered by out-of-control allergies and a bad cold. The congestion really played havoc on my breathing and my vocal range. Yes, we should have rescheduled the recording date when I was healthy, but we couldn't afford to lose our deposit. The entire album was recorded in just a couple of hours as that's all our budget allowed.”


Everything about this record is wrong: the off-key trumpet, the out of tune vocals, the ‘unique’ spelling and use of punctuation in the title, although, as Max said: “It has been our experience that those who criticize the loudest are the ones with the least knowledge and experience. You may like our music; you may not like our music. But no one has any right to declare it right or wrong. No one has ever been granted that authority. People who have contracted with us over the years (many times, repeatedly) did so because they had a good time. That was our job - to entertain.” I for one certainly find it hugely entertaining, although I disagree about Max’s view of criticism (well I would, wouldn’t I?). If you put your art out there for other people to experience they are bound to critique it. Dealing with criticism is part of the job; everyone has an opinion.


If the following couple of taster tracks leaves you wanting more, you can still find the whole album at WFMU. Here’s Goin' Out of My Head and The Shadow of Your Smile.

Email ThisBlogThis!Share to TwitterShare to FacebookShare to Pinterest
Labels: 3 Pea’s in a Podd, Goin' Out of My Head, Shadow of Your Smile, Three Peas in a Podd, Wfmu
Newer Posts Older Posts Home
Subscribe to: Posts (Atom)