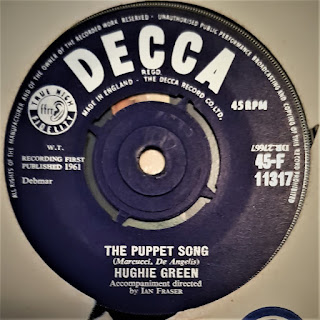 Today’s horror is the 1961 offering from disgraced talent show host and right-wing megalomaniac Hughie Green, The Puppet Song and The Valley Of Peppermint Springs

Green will always be remembered for hosting TV talent show Opportunity Knocks. The show began on radio, initially on the BBC Light Programme where it ran from February to September 1949, before moving to Radio Luxembourg It was first shown on ITV from 20 June 1956 to 29 August 1956, but a second run, that commenced in July 1964 and lasted until 20 March 1978, saw it become one of the highest rated shows on British television.

Opportunity Knocks was huge, and the list of people that went on to carve out a career in entertainment is endless: the show helped make stars out of Mary Hopkin, Les Dawson, Paul Daniels, Lena Zavaroni, Pam Ayres, Peters and Lee, Bobby Crush and countless others. As hit rates go, it did better than either the X Factor or Britain’s Got Talent. But Green didn’t always get it right. In 1975, after an audition in Surbiton Town Hall, he passed on a young three-piece band from London who went on to find fame as The Jam.

The show was axed in 1978, shortly after Hughie went on a crazed political rant on-air. Inspired by the rise of Maggie Thatcher and a resurgent Tory Party, In December 1976, at the end of an episode of Opportunity Knocks, Green performed a bizarre piece about the state of the United Kingdom, Stand Up and Be Counted, which was released as a single by Philips in 1977 (backed with a grotesque rewrite of Land of Hope and Glory) with the distinctly patriotic catalogue number GB1. You can read more about that particular debacle HERE

Opportunity Knocks was revived by the BBC and ran from March 1987 to June 1990, hosted initially by Bob Monkhouse (under the title Bob Says Opportunity Knocks!) and subsequently by former winner Les Dawson. Green never got over the humiliation of being axed and sank into a mire of alcohol-fuelled self-loathing. He was not the nicest of men: one of his mistresses killed herself when he left her by pouring petrol over herself and setting herself on fire, but he left the best until last. At his funeral in 1997, it was revealed that he was the real father of TV presenter (and wife of Bob Geldof) Paula Yates, a fact the poor woman was unaware of until she herself read it in the News of the World. There’s little doubt that this contributed to poor Paula’s personal problems and death, from an accidental overdose, in 2000. 14 years later her second-oldest daughter (and Hughie’s granddaughter) Peaches also died of a heroin overdose, aged just 25.

Anyway, here are both sides of the 45.


(if the links aren't working, give them a couple of hours and try again!)

Posted by Darryl W. Bullock at 09:06 No comments: Links to this post

Email ThisBlogThis!Share to TwitterShare to FacebookShare to Pinterest
Labels: Bob Monkhouse, Hughie Green, Land of Hope and Glory, Opportunity Knocks, Paula Yates, Stand Up and Be Counted, The Puppet Song, The Valley of Peppermint Springs 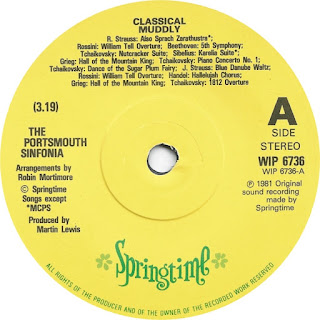 Although I seldom post about novelty records there have been one or two notable exceptions over the years. This is one of those records that always makes me laugh, and I think its about time I shared it with you.

The Portsmouth Sinfonia was founded by English composer Gavin Bryars and a group of students at the Portsmouth School of Art in 1970 and was open to anyone that either had no musical training or who chose to play an instrument that they were unfamiliar with. The only rules were that everyone had to come for rehearsals and that people should try their best to get it right, not intentionally play badly. Their first recording¸ a one-sided flexi disc of Rossini's William Tell Overture, was sent out as the invitation for the 1970 degree show. Their debut album, Portsmouth Sinfonia Plays the Popular Classics, followed in 1973.

The orchestra remained something of a cult, selling out the occasional live performance but not really attracting anything like a large audience until, in 1979 they issued their third album, 20 Classic Rock Classics, which gained a fair amount of airplay. After that, the orchestra was approached by Island records and, inspired by the “Hooked on Classics” series, in 1981 they released Classical Muddly – which became a top 40 hit in September of that year.

In 2011 the Portsmouth Sinfonia was the subject of a Radio 4 documentary. In that programme Bryars claimed that idea that members were required to be novices at their instruments was a "scurrilous rumour put about by the BBC". As if!
Here’s their 1981 hit single Classical Muddly (originally backed with a liver version of the Hallelujah Chorus, recorded at the Albert Hall) and, from their 1973 Brian Eno-produced album Portsmouth Sinfonia Plays the Popular Classics, the ridiculously fun Also Sprach Zarathustra.

Posted by Darryl W. Bullock at 11:58 6 comments: Links to this post 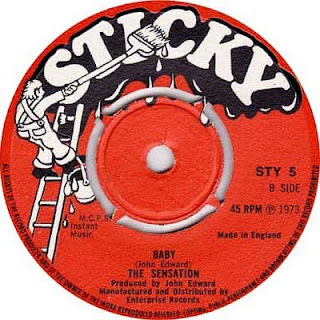 Today’s terrible tune comes courtesy of drummer Martin Samuel, the former sticksman for the late 60s/early 70s pop/rock band Heatwave (not to be confused with the mid 70’s Brit disco band of the same name), and it’s the truly awful Baby by Sensation.

A bit of background. Based in London, Heatwave (according to Martin Samuel, the band was never known as Heat Wave) were signed by Larry Page, the former Teenage Rage (and manager of the Kinks and the Troggs), to his Penny Farthing label. They released one single, the psych-influenced Sister Simon (Funny Man)/Rastus Ravel (Is A Mean Old Man) in November 1970. Also released in Europe and Japan, as Martin says, “It's on the Penny Farthing label and, so far, we have not seen so much as a penny or a farthing from it!”

The A-side featured the Ladybirds (three former Vernons Girls who were the go-to vocal backing act of the time); the flip had a young man called Rick Wakeman on keyboards and Doris Troy on backing vocals. Both songs were written by John Edward, the former pirate radio DJ who would go on to huge success with Metal Mickey and Renee and Renato.

In the middle of the following year Martin left the group. “Although Heatwave kicked me out for suggesting we play more originals (we did two of mine) and songs not by Mr. Edward, it was really as a result of Edward recording singles using session players and only the vocalists, as did The Beach Boys, from the bands in his agency,” he explains. “I wanted no part, and they were worried I’d blow the whistle.”

He auditioned for (and almost joined) Badfinger, as a replacement for Mike Gibbins. “Mike had been doing serious session work as a drummer. He felt playing with them was cramping his style and he wished to expand as a drummer so, it was a friendly mutual agreement. I had the gig until Pete asked if I wrote songs. Having recently been replaced for just such a reason, for the first and last time in my life I lied and told him, ‘No, I'm only a drummer’. Later I discovered they were looking for an all-writing band!” Missing out on the Badfinger gig, he instead joined the Jonathan King-affiliated Crew. 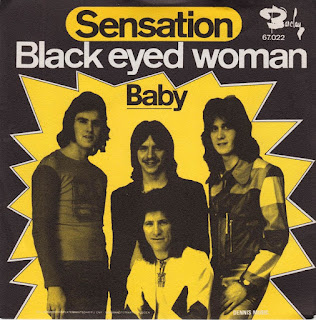 Sensation (or The Sensation), the band that Heat Wave became after Martin left, found a new drummer (a chap called Stumpy), stuck with John Edward and recorded a new single, the glammy Black Eyed Woman (not a bad record at all) which was backed by the dreadful Baby... a song whose lyric must have taken John Edward months to write.

Martin rejoined not long after, “on condition we play more of ‘our’ originals and record them ourselves. Such did not transpire so I jumped ship, flew to Jersey and joined Simon Raverne.”

By an odd twist of fate, in 1980 Martin almost joined Badfinger again. “I was a studio session drummer in Los Angeles and met up with Joey Molland, who was working part-time as a carpenter/odd-job man, when Tom Evans flew in from the U.K. to discuss what was to be the aptly-named Badfinger album, ‘Say No More’. They wanted an all-Brit band including Tony Kaye, but Tony would only play if his drummer pal was in the band so, once again, I was ousted. As it turned out, they recorded the album in Miami (where Gibbins later passed away) with a totally different drummer!”

A lifelong drummer, Martin is still playing and composing today.

You can find out more about – and hear more from - Heatwave and their associated bands at http://www.heatwave.n.nu/ Col Wolf has also written a detailed history of the band, which you can find here: http://www.forumusic.co.uk/heatwave.html


My huge thanks to Martin for taking the time to get in touch, and for providing the illustrations. Here are both sides of the Sensation 45. Enjoy!