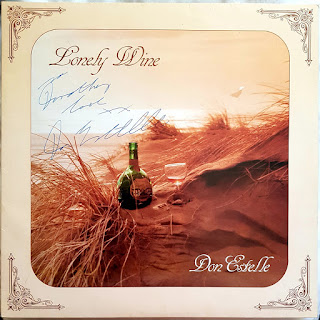 I’m on holiday for a week from tomorrow; no doubt I’ll be scouring the charity shops of the tip of Cornwall in hope of finding some more strange, obscure and downright awful noise for you all.

When I was holidaying in Yorkshire last year I came back with a fistful of terrible vinyl, much of which I’ve yet to blog. Let’s start to put that right now with two tracks from one of those records, Don “Lofty” Estelle’s Lonely Wine.

My copy of Lonely Wine, like I assume the majority of Don’s albums gathering dust somewhere, is autographed. It’s a standing joke among bad music enthusiasts that – like Father Francis – it’s harder to find a non-signed copy of any of the actor/singer’s albums. I love the cover: a sad bottle of that 60’s favourite Mateus Rose sitting on the sand. On the reverse, just to let us all know that The Don knows his stuff, he’s photographed sitting at a desk accompanied by two loose apples and a bottle of Blue Nun. It couldn’t be any chintzier… unless it came with a free bottle of Thunderbird or Bull’s Blood, that is.

Perhaps the title of the album should have been Blind Drunk.

Anyway, let’s all enjoy Don’s whiter-than-white bread covers of Lionel Richie’s Hello and Stevie Wonder’s I Just Called To Say I Love You, and I’ll see you all in a fortnight. Don’t forget you can always get your fix of madness by tuning in to the World’s Worst Records Radio Show each week, or by streaming episodes at your leisure.

Can Ken Cope? Ken Can! 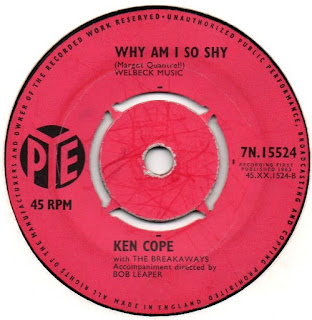 Kenneth Cope is the much-loved actor who people of a certain age will remember fondly for playing the role of dead detective Marty Hopkirk in the cult TV show Randall and Hopkirk (Deceased), which aired in the US under the title My Partner, the Ghost.

Cope trained at Bristol’s Old Vic, making extra money by working part-time as a hospital porter. Still with us at the grand old age of 87, during his distinguished career he has appeared in more than 30 movies, and in such iconic TV shows as The Avengers, Coronation Street, Brookside, Casualty. Minder, a Touch of Frost and Doctor Who.

But there’s one thing that I’m pretty sure the Liverpool-born actor would rather forget, his one stab at pop success. In May 1963 he issued a Mike Sarne-inspired one-off single for Pye records, Hands Off, Stop Mucking About backed with Why Am I So Shy. Credited to Ken Cope and the Breakaways, the disc came out while he was still a regular cast member of Coronation Street and, at the time, Cope boasted that “It’ll get me a golden disc if one in every 24 folk who watch ‘Coronation Street’ go out and buy the record,” but sadly, despite the promotion the disc received, the TV watching public did not all rush out at once, and it sank without a trace. 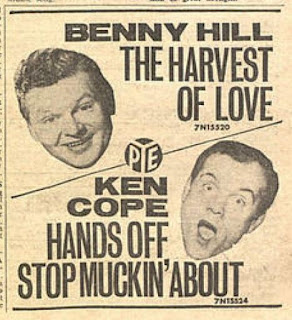 The Breakaways, incidentally, were a Liverpudlian vocal trio who recorded a handful of discs for Pye between 1962 and 1965: Breakaways member Margo Quantrell penned the flip side of the disc, with the A-side co-written by Tony Hatch under the pseudonym Mark Anthony. With so much local talent on offer you would have thought the scousers would have gotten behind the disc, but as Disker (a.k.a. Tony Barrow) wrote in the Liverpool Echo “Mike Sarne has pumped every ounce of value from the Cockney comedy approach to love-making and love-resisting and The Vernons Girls have already done the same for the Liverpool parallel. ‘Hands Off’ is moderately amusing and it has a jolly, catchy tune, but it lacks that extra something which might have made it a best-seller.”

Anyway, here are both sides of this fun little 45.

Email ThisBlogThis!Share to TwitterShare to FacebookShare to Pinterest
Labels: Coronation Street, Dr Who, Hands Off, Kenneth Cope, Randall and Hopkirk (Deceased), Stop Mucking About, Tony Hatch, Why Am I So Shy 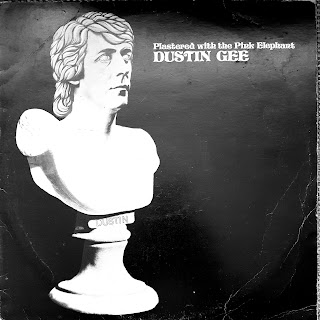 You’ll recall in my last blog post I mentioned Dustin Gee, the former comedy partner of Les Dennis, and his 1976 album Plastered With the Pink Elephant. To be honest, I thought I had posted tracks from that some time back, but it was brought to my attention, by my good friend The Squire, that this was not, in fact the case. Let’s remedy that right now.

Plastered With the Pink Elephant was Dustin’s one and only album, issued by the small Manchester-based label Indigo, and sold out of the boot of his car at gigs on the Northern working men’s club circuit. It’s an odd mix of comic songs, cabaret favourites and one or two seriously peculiar – one would assume personal – choices, evinced by the three cuts I offer here for you today.

Born Gerald Harrison in York, after leaving school at 15 Dustin studied at art college. He worked mainly with stained glass and did some repair work on the windows of York Minster. In the evenings he played in a band called the Dare Devils, who eventually became Gerry B and the Rockafellas. After the group disbanded, Gee became first a compere, then a comedian.

He got his big break on the ITV impressions show Who Do You Do?. His future comedy partner Les Dennis also appeared on the show. In 1980 Gee joined the cast of BBC-TV’s Russ Abbot's Madhouse: two years later Les Dennis joined the crew, and Gee and Dennis formed a comedy double act. In the summer of 1982 Gee had a minor heart attack when doing a summer season with Jim Davidson in Torquay, but soon recovered enough to be able to continue with his television work.

In April 1984, Gee and Dennis began their own TV comedy show, The Laughter Show (retitled Les & Dustin's Laughter Show for the third and final series).  In May 1985 Gee fell ill while on stage at the North Pier in Blackpool. He was taken to Blackpool Victoria Hospital where a minor heart attack was diagnosed. Gee was also told that he had dilated cardiomyopathy and that he should take it easy. Despite doctors’ orders, after a month he was back on stage, and continued until the show closed at the end of September.

Gee and Dennis were appearing in pantomime at the Southport Theatre, Merseyside when, on 1 January 1986, Gee suffered a massive heart attack. He was rushed to Southport General Hospital, where he died two days later. Believing in the old showbiz adage that “the show must go on”, Dustin was replaced in the pantomime by Jim “Bullseye” Bowen.

Here are three cuts from Plastered With the Pink Elephant Covers of Johnny Kidd and the Pirates’ Please Don’t Touch (later covered by Motorhead and Girlschool, as Headgirl), The Beatles’ Piggies and David Bowie’s Space Oddity. 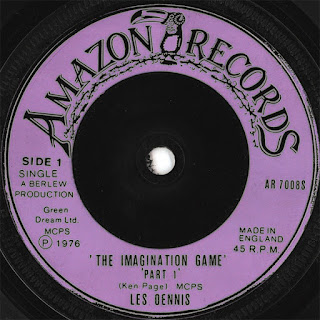 It’s not often that I post novelty records, but once in a while something comes along that just has to be shared – as is the case with Les Dennis and The Imagination Game.

I have to admit, I knew not of the existence of this horror until last weekend, when fellow collectors, bloggers, Tweeters and friends of WWR Stephen ‘Beany’ Green and Dame Agnes Guano brought it to my attention.

Winning New Faces catapulted the youngster, then still only 20, to fame. He landed a recurring role on the ITV impressions show Who Do You Do and, in 1982, he joined the team on primetime BBC show Russ Abbot's Madhouse, forming a comedy partnership with fellow impressionist Dustin Gee. That lead to a hit series of their own, The Laughter Show which sadly folded after three series following Gee's sudden and unexpected death in 1986. In 1987 Dennis became the host of ITV’s long-running quiz show Family Fortunes remaining with the popular show until 2002. Since then he has moved into acting, appearing in such TV shows as Brookside, Casualty, Extras, Midsomer Murders and Coronation Street, and – presumably after a few vocal coaching sessions - on stage in Hairspray, Chicago and me and My Girl.

My hugest of huge thanks to Dame Agnes Guano for admitting to owning a copy of this!