I'll have a P Please Bob 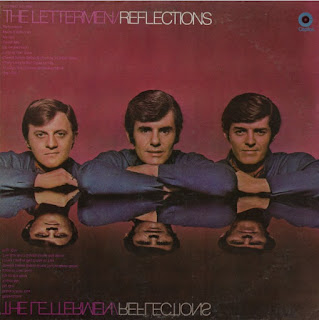 The Lettermen are an American male close-harmony vocal trio that has been performing since 1959, and making records since 1961.

The group’s line-up has changed many times over their 60-year history, but in that time they have enjoyed 20 Billboard Top 100 entries (including two Top 10 singles), 32 consecutive Billboard chart albums, 11 gold records, and five Grammy nominations. The current Lettermen consists of original founding member Tony Butala, Donovan Tea (who joined the group in 1984), and Bobby Poynton (who first joined in 1989, left for a period and recently returned to the group).

The had their first hit in 1961, with The Way You Look Tonight, have appeared on TV around 200 times and have played over 10,000 live shows, a truly remarkable feat.

I realise there is an audience for this kind of thing – you cannot sustain a 60-year career without an audience - but the Lettermen’s trademark white bread covers are a bit too syrupy for me. I’ve nothing against good easy listening music, but I would suggest that, on occasion, the group’s choice of material has been a little misguided, as demonstrated on their 1970 album Reflections, which includes reworkings of songs made popular by Aretha Franklin (Natural Woman becomes Natural Man), the Doors, the Supremes, The Temptations and The Drifters among others.

Appropriately the only track that really works is their cover of Bread’s Make It With You.

So, from that very same album of pop and soul covers, here are the Lettermen with The Doors’ Touch Me and Diana Ross and the Supremes’ Reflections

Email ThisBlogThis!Share to TwitterShare to FacebookShare to Pinterest
Labels: Aretha Franklin, Diana Ross and the Supremes, Reflections, The Doors, The Lettermen, Touch Me 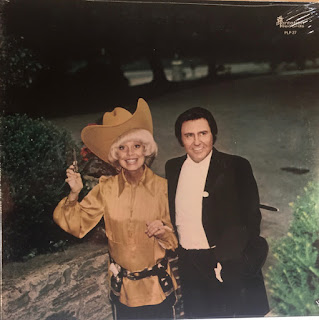 C&W, issued in 1977, was the only album from actress, singer, dancer, and comedian Carol Channing (who sadly died earlier this year just a couple of weeks shy of her 98th birthday) and Webb Pierce, honky-tonk vocalist, songwriter and guitarist and one of the biggest country stars of the 1950s, whose band included such stellar musicians as pianist Floyd Cramer and guitarist-vocalist Faron Young.

Referred to on the reverse of the album sleeve (twice, no less) as “this unlikely duo”, the couple on the front of the sleeve look like they’re going to a Hallowe’en party, not a recording studio. Carol brandishes one of her toy guns as she walks arm in arm with Webb, whose badly dyed bouffant makes him look like Johnny Cash impersonating Dracula. But it’s the music inside that really grates.

Carol’s trademarked cracked voice is no match for Webb’s baritone. Thank goodness the whole sorry assemblage only lasts for less than half an hour. Issued by Shelby Singleton’s Plantation records, C&W includes reworkings of some of Pierce’s big hits, but the pairing of country legend and Broadway superstar just doesn’t come off. Bizarrely Channing and Singleton thought otherwise, and Channing followed this album with another for the label, a collection of duets entitled Carol Channing and Her Country Friends.

In his later years, Pierce became known for his excessive lifestyle. He had North Hollywood tailor Nudie Cohen, who had made flamboyant suits for Pierce, line two convertibles with silver dollars. He built a $30,000 guitar-shaped swimming pool at his Nashville home which became a popular paid tourist attraction — nearly 3,000 people visited it each week — causing his neighbours, led by singer Ray Stevens, to file a court action against Pierce to end the tours.

Here are a couple of tracks from this peculiar collection: Take Your So Called Love and Tennessee 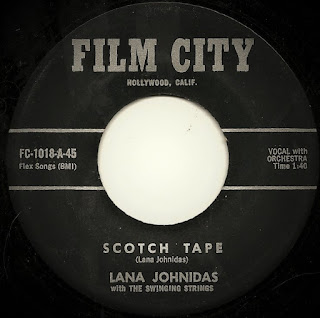 A peculiar little song-poem/vanity hybrid for you today, originally unearthed many years ago by fellow blogger Bob Purse.

Scotch Tape/Close to You, credited to Lana Johnidas and the Swinging Strings, was an early release from Sandy Stanton’s Film City label, which means it was issued circa 1964. Being that early the chances are that the Swinging Strings – Sandy’s ever-present Chamberlin – are played by either Sandy himself or the great Rodd Keith. Both songs were written by Ms. Johnidas, and my feeling is that she probably paid for this disc to be cut to demonstrate her songwriting prowess, for shortly after she joined the ranks of Hollywood-based Our Productions/Your Management, whose offices were in the Capitol Tower on Sunset and Vine.

Her career as a performer/composer was managed by Michael Goldberg, who also looked after the careers of such stellar names as Friar Tuck, the Plastic People, Jacobson and Tansley, and Epic recording act The Kaleidoscope. Sadly, it does not look as though that career amounted to much, as outside of this one disc I’ve been unable to find a credit for Lana on any other record. A shame, because this is a fun little record and her voice, with that hint of a giggle in it, is rather infectious.

Los Angeles-based publisher Flex Songs was closely associated with Stanton: recordings featuring Stanton and published by Flex appear on Excel, Fable and Film City. I can find no evidence, but years of experience would lead me to believe that Stanton was at very least a partner in the company, if not the
outright owner.

That’s about it. As usual, any further info would be appreciated. Thanks Bob, for unearthing this gem.