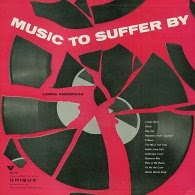 Wherever collectors of bad record gather, the late, lamented Leona Anderson will always be celebrated for her aptly-titled 1957 album, Music to Suffer By. From the same school as Mrs Miller, Florence Foster Jenkins and Mme St Onge, Anderson reveled in the limitations of her voice: according to the excellent Space Age Pop web site (http://www.blogger.com/www.spaceagepop.com) her publicity proudly proclaimed her as "the World's Most Horrible Singer."

The sister of early cowboy movie star Bronco Billy Anderson, she appeared in a number of films - thankfully all silent - in the early 1920s. One - Mud and Sand - satirised Rudolph Valentino and starred the great Stan Laurel (as Rhubarb Vaselino; Leona played Filet de Sole), another (In the Park) starred Charlie Chaplin, and a third (Bronco Billy's Mexican Wife) was directed by and starred her brother. Many years later, and shortly after the release of her only album, she also appeared in the Vincent Price horror film The House on Haunted Hill.

By the mid-1950s Leona had developed her unique singing style and made many cabaret appearances sending up opera singers. She released a single, Fish, a 78 rpm released by a small New York City label, recorded with Bill Baird (a puppeteer best known for the Lonely Goatherd marionette scene in The Sound of Music) on tuba and Tony Burrello, famous for the Dr Demento favourite There's a New Sound (The Sound of Worms Eating Your Brain), on calliope. TV comic Ernie Kovacs heard it and invited her on his show, which no doubt led Unique Records to record and release Music to Suffer By.

She died at the age of 88 in a retirement home, but left us with a small, but perfectly formed legacy for which we will be forever grateful. Here, for your listening pleasure is Rats in my Room, from Music to Suffer By.