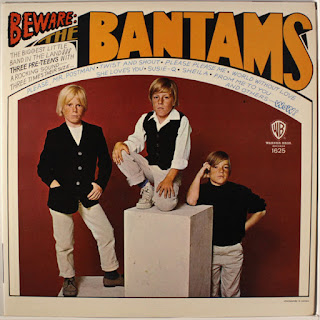 Advertised as ‘the biggest little band in the land, with a sound three times their size’, the Bantams were three pre-teens from Venice, California who, in 1966, achieved a modicum of fame locally and scored a national record deal thanks to their garage band pop stylings.

12-year-old Mike, Jeff (10) and Fritz Kirchner (the baby of the bunch at just nine years-old), were just three of the eight children of Mr and Mrs Earl Brown, all of whom lived cheek-by-jowl in a little house near the Venice Post Office. Seven-year-old sister Brenda also harboured dreams of pop stardom, but she was considered too young to join the act. With Mike on guitar, Jeff on bongos, and Fritz on bass, the boys were inspired – like so many Americans – to form a group after seeing and hearing the Beatles in 1964. That was the same year that the family moved from their previous home in Milwaukee to sunny California. 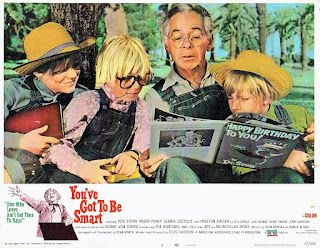 The move was a fortuitous one. They were spotted by a talent scout, either playing for nickels on Ocean Park Pier (as the official publicity would have it) or, more reasonably, after winning a trophy in a local band contest held at pacific Ocean Park. Whichever, before 1965 was out they had made their first film of a four-picture deal, the 1965 Mamie Van Doren vehicle Methuselah Jones. That movie – which would prove to be their sole big-screen outing - was eventually released to US cinemas in 1967 under the title You've Got to Be Smart, with the boys credited as Mike, Jeff, and Fritz Bantam. They would also be seen on the small screen, on TV shows including Hullaballoo, Hollywood A-Go-Go, and Where The Action Is.

In January of 1966 the band signed a five-year contract with Warner Brothers, who promoted the act as ‘the youngest rock ‘n’ roll band in the world’. The Bantams released two 45s and an album, Beware: the Bantams in the States, and one highly-collectable EP in France, which compiled four of the most Beatle-y tracks from their album... which was pretty much all Beatles covers or covers of songs the Beatles had already covered themselves. the album was, according to Cash Box, recorded in just four hours. The tracks are huge fun, and the band Warners put together to back the boys is smoking hot, but despite Billboard claiming that the ‘brothers with talent have smash hit possibilities… Could go all the way,’ none of these releases made the US charts, and Warners soon dropped them. 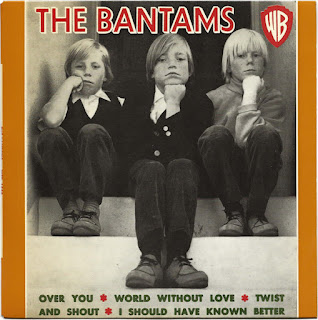 In 1967 the boys played for wounded army veterans in San Francisco, along with ventriloquist Jimmy Gunther and his doll Maxie. But with both their film and recording careers stillborn, they soon seemed to have turned their back on music, to continue with their schooling, playing on their skateboards and being kids. Jeff was seen, in 2011, playing drums with local cover band Fluid Drive, but apart from that all three of the bantams seem to have carved out perfectly nice lives for themselves outside of showbiz.

Here are a couple of tracks from the magnificently off Beware: the Bantams, their covers of the Beatles classics From Me To You, and Ticket to Ride.

Email ThisBlogThis!Share to TwitterShare to FacebookShare to Pinterest
Labels: Beware the Bantams, From Me To You, Mamie Van Doren, The Bantams, The Beatles, Ticket to Ride