The Sad Story of the Ponderosa Twins 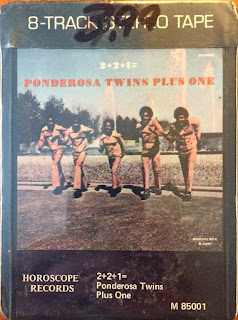 Family groups often go through the mill, and often at the hands of their overbearing parents or management (or both), but if you thought the Jacksons had it bad with their horrific father wait until you hear about trials and tribulations of the Ponderosa Twins Plus One.

Formed in Ohio in 1970, the confusingly-named Ponderosa Twins Plus One – who, as far as I am aware had absolutely nothing to do with Bonanza - actually consisted of five members (just like a certain Jackson Five), two sets of identical twins Alfred and Alvin Pelham, and Keith and Kirk Gardner – who had been performing as the Ponderosa Twins for around a year or so - along with their chum Ricky Spicer, who joined in 1970. All five attended the Patrick Henry Jr. High School on the east side of Cleveland.

PT+1 came to the attention of Bobby Massey of soul act The O’Jays. Accompanied by Massey, they recorded three singles for Chuck Brown’s Horoscope Records. At this point, Brown took over their management. Their debut, a cover of Sam Cooke’s You Send Me peaked at number 23 on Billboard’s Soul chart. In 1971, the group released their album, 2 + 2 + 1 = Ponderosa Twins Plus One. It’s not a bad album at all: even Billboard reckoned that even if the group were something of “a Johnny-come-lately in the bubblegum soul sound” they were still “out of sight”.

Bound became their second single, with the label altering its name to Astroscope, and this peaked at number 47 on the Soul chart. Although they played many shows and supported a number of big-name acts, after 1973’s non-album single Tomorrow’s Train/Come Back Sunshine,  the band would make no further recordings. They disbanded in 1975: in a court deposition singer Ricky Spicer would later state that the principal reason for their parting ways was that they were broke: “The Group toured for months, sometimes performing twice in a single day. Although the Group was promised payments for their performances, Mr. Brown and Saru [his company] failed to make any payments to Ricky or the other members of the Group for any performances. In 1975, the group fell apart due to the lack of royalties and no revenue from their live shows.”

Ricky Spicer went on to work with stars including Gladys Knight and James Brown. Sadly his cohorts were not so lucky. One of the Pelham twins suffered from mental health issues, and one of the Gardner twins has been incarcerated in an Ohio penitentiary since 1980 for various offenses. Disillusioned, Ricky Spicer eventually left the music industry became a construction worker. Alvin and Alfred are now both deceased.

The band would have been forgotten for good had it not been for their track, Bound being sampled by rapper Kanye West in his 2013 song Bound 2, which featured on his huge international hit Yeezus. Ricky Spicer filed a lawsuit against West, as well as Roc-A-Fella Records, The Island Def Jam Music Group, Rhino Entertainment and Universal Music Group, citing copyright infringement. The following year Spicer sued Vogue magazine and its publisher Condé Nast, after Bound 2 was used in a promotional video for the magazine’s April edition, which featured West and his wife Kim Kardashian. According to court papers, at the time both Keith and Kirk were incarcerated, but Ricky had power of attorney to act on behalf of the Gardner twins and for the families of the late Pelham twins. The court case against West was settled for an undisclosed amount in 2016.

Here are a couple of tracks from 2 + 2 + 1 = Ponderosa Twins Plus One, Turn Around You Fool and Take Me Back