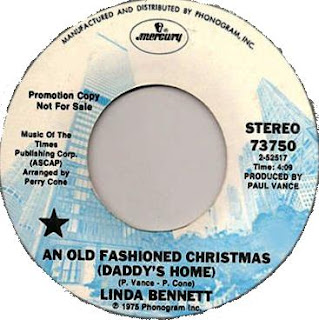 Snaffled from the net a Christmas or two ago, I had fully intended to post this - the second instalment in our countdown to Christmas - last year.

Its hard to know how to describe it: traditional Xmas schlock interspersed with fake news reports, off-key whining kids and a you-can-see-it-coming-for-miles payoff. One thing is sure; it truly is horrible.

Put out by Mercury Records in time for Christmas 1975, the song was produced and co-written by Paul Vance, an extremely successful songwriter/producer whose credits include Brian Hyland's 'Itsy Bitsy Teenie Weenie Yellow Polka Dot Bikini', Perry Como's 'Catch A Falling Star', plus hits for the Cuff-Links and Johnny Mathis amongst a string of others. The singer, one Linda Bennett, was no stranger to the recording studio either, with albums, TV (including and appearance with Ricky Nelson on Ozzie and Harriet) and film credits to her name.


I find it inconceivable that someone at Mercury could have listened to this garbage and though 'mmm...Christmas number one', but I'm sure glad that they did. 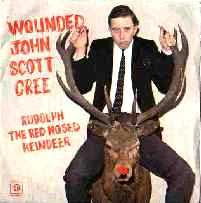 Welcome to the World's Worst Records countdown to Christmas. The need to celebrate the festive season has caused singers and songwriters to produced a truckload of terrible records, and each week between now and New Year I'll be posting a horrendous ditty for you to marvel at.

First up, in a break from tradition here at WWR, I offer you Rudolph the Red Nosed Reindeer by Wounded John Scott Cree -as suggested (and kindly donated) by a regular visitor to WWR, Ross Hamilton, who tells me: "It was released on Pye records in 1977. I grew up listening to this bonkers piece of Christmas music after my Dad bought it the year it came out..."

Wounded John Scott Cree, for those who care about these things, is still active today. According to his own website http://myweb.tiscali.co.uk/johnscottcree/ he's a 'comedy singer signwriter (sic) with over 40 years of gigging, telling stories and writing and recording funny songs, with seven kids and a lifetime of cynicism'. Playing live since 1965, Rudolph was originally recorded in 1975 but took two years to place with a record label. says Cree (in his free e-book, A Superfluous Man, available to download from his website) the disc managed a little airplay (enough, apparently for Ross' dad to hear it) with Paul Burnett, Dave Lee Travis and others giving it needle time.

"Tony Blackburn did once and said it was the worst record he had heard all year. That generated my first fan letter from a listener from Yorkshire," Cree writes proudly.

More to come over the next few weeks, but for now enjoy this appalling audio

PS - I've just noticd that the divShare player doesn't appear in all browsers, so here's a link to the Rapidshare download:
http://rapidshare.com/files/310555820/Rudolph_The_Red_Nosed_Reindeer.mp3
Posted by Darryl W. Bullock at 14:47 4 comments:

Well, being the completest record nerd that I am I've yet to give up on discovering more on this man's brilliant career. So far I've managed to uncover precious little more info on our hero, apart from, finally, the complete tracklisting for the Cruise It album.

For those who, like me, can't get enough of this kind of thing the full album consists of just eight tracks, all seemingly self penned, and performed by Gleneil on bass, electric keyboards and vocals, George Reich on guitar and synth and Tom Curtis on acoustic guitar:


Apparently GRM stands for Gleneil Roseman Music - a vanity project (stands to reason I guess) and there indeed was, as I thought, at least one further album, Soothing (catalogue number GRM 153031). Unfortunately I've not yet managed to find any more audio clips but, thanks to a Japanese trading site I have found the cover and label of the 12" single of Serious Joke/Cheapy Chappy and Ito (above).


If anyone has any soundclips from either album - or if they know of any other Gleneil releases - please get in touch.
Posted by Darryl W. Bullock at 16:07 10 comments: 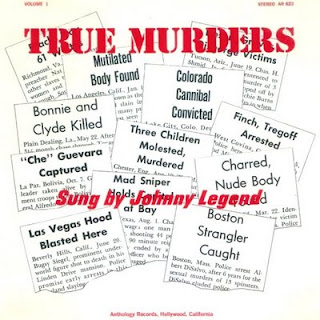 Legend has made quite a name for himself over the years as both a musician and through touching on the fringes of the exploitation film industry - with brief associations with, among others Ed Wood Jr, American International Pictures and even Quentin Tarantino. His story is too long and involved to tell here, but if you need to know more you could do worse than check out

True Murders appears to be a self-financed vanity release, I can't imagine for a second that anyone with an ounce of business sense would think to bankroll such a thoroughly distasteful project. Songs about the death of Che Guevara, Bugsy Siegel and the atrocities committed by Ian Brady and Myra Hindley hardly seem likely to attract major record company bucks.

But what the hell. Have a listen to the historically (and hysterically) inaccurate Manchester Moor (there is no Manchester Moor, it was Saddleworth Moor; there were more than three graves involved, although not all of the bodies have been found yet) and enjoy!

If you fancy a listen to his rather fun rockabilly discs, check out the YouTube video below. The Holy Beat sounds as if it were written specifically for a John Waters soundtrack!