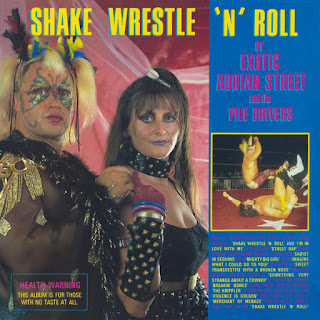 Adrian Street (born 5 December 1940) is a retired Welsh professional wrestler, known for his flamboyant, androgynous wrestling persona, Exotic Adrian Street. He’s also the man behind a bunch of rather wonderfully-bad recordings, including the 1986 album Shake, Wrestle and Roll, and as such is the subject of today’s bloggage.

From a Welsh coal-mining family, Street won his first fight in 1957. Initially working under the name Kid Tarzan Jonathan, by 1961 Street was touring the UK under his own name, working as a professional heavyweight wrestler. Wrestling was a popular pastime, and televised bouts were big business: in the mid-1960s Street began to make regular appearances on ITV’s Saturday afternoon World of Sport programme. Although claims in the press around that time that he was a former Mr. Universe title holder appear to have been a little, shall we say, over-generous, he became something of a star, and a popular live draw.

By the end of the 1960s, he was being billed as ‘Adrian Street: the Blond Headed Glamour Boy’, and was being advertised as ‘Mr Magnificent! Fabulous Gowns! Long Blond Hair! Lovely Body!’, but the increasingly outrageous look hid a man with a conscience: in 1973 he became involved in a political campaign to demand the release of Jewish civil rights activist Sylva Zalmanson from a Russian gulag. The following year he starred on TV in a drama penned by former wrestler turned actor and scriptwriter Bryan Glover, A Drink Out of the Bottle.

By the beginning of the 1980s, he was working in the USA, and it was here that he became Exotic Adrian, an outrageously-attired, effeminate ‘heel’ character. This gimmick was the result of his playing up to taunting from an audience one evening, with Street saying that ‘I was getting far more reaction than I’d ever got just playing this poof. My costumes started getting wilder’. In January 1983 he caused outrage when he kissed Black wrestler Ira Reese during a match. The Memphis TV station broadcasting the bout received a number of complaints about this flagrant exhibition of interracial homosexuality.

Egged on by second wife Miss Linda, his signature move in the ring was to kiss opponents to escape being pinned down and to put make-up on then while they were disabled. Working primarily as a heel - a wrestler who portrays a villain or bad guy and who acts as an antagonist to the ‘faces’, who are the heroic, good guy characters - and occasionally with his wife and manager (had wrestled in Britain as Blackfoot Sue) as a tag-team duo, the pair travelled all over the world.

Now retired and back home in Wales, he’s certainly led a colourful life, and thankfully during his career he took the time to lay down some tracks for you lucky people, beginning in 1977 with the 45 Breakin’ Bones. Three years later he issued a second single, Imagine What I Could Do To You before collecting those four sides, along with several new recordings, on the 1986 album Shake, Wrestle and Roll. He would follow this up with the cassette-only release Naughty But It’s Nice. Many of Adrian’s songs were written by Cheshire-based musician (and former member of the Four Dees) Don Woods, who has collected all of the recordings onto one CD, The Full Hit: the Complete Collection, which is available now, from Don’s website, for only £6:50.

Here are a couple of tracks from Shake, Wrestle and Roll to whet your wrestling whistles: A Sweet Transvestite With a Broken Nose and Breakin’ Bones. Enjoy!