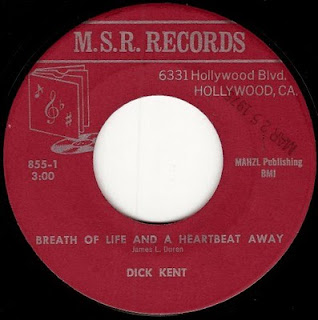 Oftentimes song-poem outfits would attempt to dupe their poor, innocent customers twice. Send us $50 and we'll make a demo record of your song. Send us another $100 and we'll record it with a full orchestra for you. Occasionally they would offer a guarantee, of sorts, that if you were not satisfied with the recording they sent you they would remake it in a style more suitable. For a few extra bucks, of course.

Very few people seem to have taken any of the companies up on this seemingly-generous offer, although there are a few song-poems out there extant in more than one version. The Saddest Story, which I featured here on WWR back in October 2008 is probably one of the best known examples, recorded in a rough demo form by Sonny (Sammy) Marshall for an Air EP before being re-recorded with full instrumental backing by the MSR Singers (with, I now believe, Bill Joy on lead vocals rather than my earlier guess of Buddy Raye) for the album Singin' Easy (MSR 213).

Another example of this rare occurrence is exemplified by the two versions of Gretchen's New Dish that you find before you today.

The first version is one of the stupidest recordings I've ever heard, and one I trot out whenever anyone asks me what it is about the genre that makes me such a fan. How can you listen to Dick Kent's loopy performance, complete with his insane Scots/Swedish accent, of Chester T Finley's words and not rupture something laughing? Clearly Mr Finley was none to happy with Dick, for he had the song re-recorded by Bobbi Blake who, in an odd twist, had performed his other song - the equally stupid Betsy and Her Goat - on the flip side of the original single. That no third version of this opus appears to exist attests to one of two things: either Chester was happy with his Gretchen being full of dosie-do rather than doo-doo or he simply ran out of either money or patience. Or maybe he died. Oh, wait a minute, that's three things....or is it four? 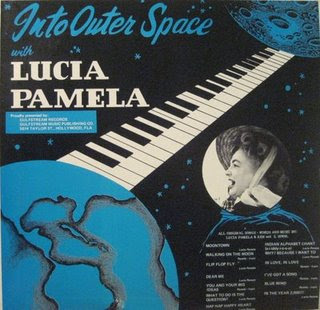 Lucia Pamela, who sadly passed away in 2002 at the ripe old age of 98, was truly a one-of-a-kind entertainer, still remembered today for recording an album in 1969 about her fictional travels to the moon, Into Outer Space With Lucia Pamela, which would have remained all but forgotten if it were not for Irwin Chusid, disc jockey and author of Songs in the Key of Z, who single-handedly helped revive her career by reissuing her album on the independent Arf Arf label.

Her extraordinary life was a mixture of fact and self-invention. She claimed, for example, to be the first person ever on television and radio; that the famous pianist Paderewski told her mother she would be the finest pianist in the world, and that she was kicked out of a German music conservatory for being overqualified. The truth, as always, was a little less colourful.

Lucia was born in St. Louis in 1904. 22 years later she won the title of Miss St. Louis. After performing in local theaters she moved to California, where she managed the Fresno Storyland amusement park and played Mother Goose there as well as hosting two radio shows - The Encouragement Hour and Gal About Town. She formed what many believe was America's first all-female orchestra, Lucia Pamela and the Musical Pirates, and claimed to be able to play 15 instruments. With her daughter, Georgia Frontiere (who sadly passed away in 2008, just six short years after her amazing mother), she formed the vocal duo the Pamela Sisters. Georgia went on to own the St. Louis Rams. A documentary on Lucia's life was started by Belgian artist Danielle Lemaire, although copyright arguments between the filmmaker and Lucia's family halted production.

Into Outer Space with Lucia Pamela was released, she always claimed, after Lucia had built her own rocket which she used to tour the Milky Way, stopping off on the moon to record her album. Lucia played all of the instruments on the album - including piano, accordion, drums and clarinet - and sang of a world where anything was possible and everything was shot through with an innocent joy, excitement and imagination. The ever-resourceful Lucia also created a coloring book that tells the story of a moon trip in which she met cows, Indians and people made of cashews and walnuts. Lucia ran a competition, offering prizes for children who sent in completed, coloured-in copies of her book, immortalised by Stereolab in their song International Colouring Contest.

People, me included, love Lucia Pamela for her infectious, childlike optimism and sincerity; she truly believed that she had visited the moon. Nuts she may have been, but I would have loved to have met her.

Enjoy Walking on the Moon from the brilliantly bonkers Lucia Pamela. 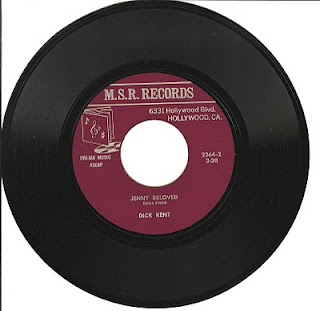 Well, the festive season is over so its time to say goodbye to all of those awful Christmas records and get back to the serious business of 'proper' bad records. And have I got a doozy for you today!

It's another classic from Dick Kent and MSR Records, one of the world's premier song poem outfits. Your Body's Makin' Eyes at Me is not only one of the stupidest titles ever but its also a truly horrific recording, Dick doing his best lounge crooner act whilst wrestling with the most banal lyrics possible.

As I've previously written, Dick was one of MSR's busiest staffers, cutting literally hundreds of sides for the company s well as several other song-poem outfits, yet little is really known about him - apart from the 'fact that his real name was Elmer Plinger and he recorded variously as Dick Kent, Dick Castle, Sonny Cash (Psychic Cigarette), Buddy Raye (Gymnasium Girl) and Richard House.


I don't appear to have posted much by Dick Kent before, which is peculiar as he's one of my favourite song-poem singers - his dulcet tones lending gravitas to such gems as Paper is Important (Parts one and two), Christopher Columbus and the Compass, and two of my all-time favourites - Jenny Beloved (featured in an earlier WWR post http://worldsworstrecords.blogspot.com/2009_06_01_archive.html) and the timeless Octopus Woman, Please Let me Go. I'll have to make up for that, starting soonwith not one but two different versions of Gretchen's New Dish, but until then enjoy this.