In cinemas this week! Listen now to the phenomenon that was FLORENCE FOSTER JENKINS!


Want to know more? Then read the first full biography of this thoroughly unique musical icon, now the subject of the film starring Meryl Streep and Hugh Grant. 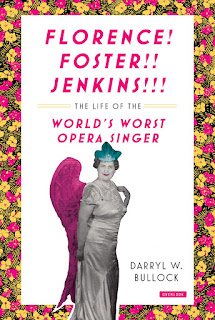 Madame Jenkins couldn’t carry a tune in a bucket. Despite that, in 1944 at the age of 76, she performed at Carnegie Hall to a capacity audience, and had celebrity fans by the score, including Cole Porter and Tallulah Bankhead. Though she was ridiculed for her poor control of timing, pitch, and tone, terrible pronunciation of foreign lyrics, and over-the-top choreographed routines and costumes, Florence achieved stardom from the sheer entertainment value of her caterwauling, which packed venues around the country, firmly convincing the self-proclaimed diva of her own talent. Her infamous 1940s recordings are still highly prized today and, seventy years after her death, she maintains a cult following that includes Barbra Streisand and the late David Bowie. As Madame Jenkins herself said of her surprising popularity, “Some may say that I couldn’t sing, but no one can say that I didn’t sing.”

In FLORENCE FOSTER JENKINS author Darryl W. Bullock shares the story of how the unflappable New York City socialite financed her own meteoric rise to success, championed by her adoring friends, her long-suffering accompanist Cosme McMoon and her devoted husband/manager St. Clair Bayfield, who stood by her side through every sharp note and shielded her from her harshest critics.

Bullock’s 'delightfully cheering' (Alexander McCall Smith, The Guardian) and entertaining narrative draws on his extensive research into the life of one of the music world’s most curious characters. His book (described as 'a howl' by the Pittsburgh Post-Gazette) reveals countless exquisite details about the star’s life never before known to the public.

With a major Hollywood movie about her life and stardom scheduled for release in August, the genius of Florence Foster Jenkins is about to be discovered by a whole new audience. There is no better time, then, to reintroduce the terribly fascinating and fascinatingly terrible figure to the public through this captivating and thorough biography, which exposes the truth that inspired the fictionalized biopic. Madame Jenkins’ incomparable legacy demands attention, just as she herself always did—and in FLORENCE FOSTER JENKINS, her unparalleled talent is finally placed in the spotlight once more.

FLORENCE FOSTER JENKINS is published by The Overlook Press:

Published in the UK by Duckworth Overlook: