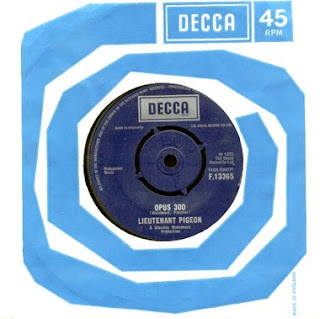 Another find courtesy of our good friend and WWR field rep Ross Hamilton, this has to be one of the most insane things ever committed to vinyl.
Released by Decca records as the b-side to Desperate Dan, the follow up to Lieutenant Pigeon's worldwide smash (and UK number 1) Mouldy Old Dough, Opus 300 features a distorted drum beat (sampled directly from Mouldy Old Dough by the sound of it), the word 'mother' repeated ad nauseum, a short calypso bridge which features the bizarre lyric: 'get your shoes from the menders and don't be late' and a spot of manic, Python-esque laughter.

As if that were not enough, this little piece of insanity was put out by a group which consisted of three hairy blokes from Coventry - Rob Woodward, Nigel Fletcher and Steve Johnson - and Rob's mum Hilda! It's totally nuts, yet still somehow managed to help propel its a-side to number 17 in the UK charts.

Lieutenant Pigeon are still around today, of sorts, having reformed in the early 90s, although none of the original members take part in its current incarnation. In 2001 the band released a follow up to Opus 300 entitled Opus 400 which lasts for over half an hour. No thank you; two minutes and seven seconds of this nonsense is more than enough for me.

Go with the Flo 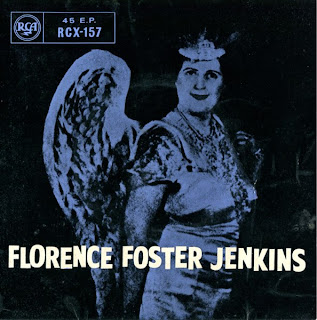 Narcissa Florence Foster, better known by her married name of Florence Foster Jenkins is, for lovers of bad music, where it all starts. Sure there were appalling performers before her but none have left behind the recorded legacy she has - less than a dozen (nine, according to Wikipedia, but I believe I have 10) tracks of light opera and lieder all recorded before the mid 1940s and all in her inimitable style. If you thought Mrs Miller was where it was at, you ain't heard nothing yet.

Born in Pennsylvania to a wealthy family young Florence had, as did most young women of the time, received music lessons as a child, However, when she expressed a desire to go abroad to continue her studies her father refused and so she eloped to Philadelphia (soon to be home of the estimable Grace Pauline Chew) with Frank Thornton Jenkins, who she married in 1885. Flo, again like Grace, earned a living as a music teacher and pianist, and in 1908, six years after her divorce from Frank, began living with St. Clair Bayfield, an actor with whom she would spend the rest of her life.

Upon her father's death in 1909, Florence inherited a sizable sum of money and set off on her singing career, giving her first recital in 1912. Her mother's death 16 years later gave her even more money and more opportunity to pursue her dreams of a career on stage.

The shame of it is that Florence had little sense of pitch and rhythm and, God love her, was barely capable of sustaining a note. In spite of this, some would say because of this, she became tremendously popular - audiences loving her for the amusement she provided, her stoicism in the face of failure and her staunch belief that she was indeed a great artist. She compared herself to the renowned sopranos of the day and dismissed the laughter which often accompanied her performances as coming from rivals consumed with jealousy. No fool, in her later years she was quoted as saying: "People may say I can't sing, but no one can ever say I didn't sing."

'It is too bad', wrote Francis Robinson, Assistant Manager of the Metropolitan Opera and the author of the liner notes to one of her posthumous collections, that 'she did not record her favorite encore, Clavelitos, a number she invariably had to repeat. A contemporary account describes Madame Jenkins as appearing in a Spanish shawl, with a jeweled comb and, like Carmen, a red bloom in her hair. She punctuated the rhythmic cadences of the song by tossing tiny red flowers from her pretty basket to her delighted hearers. On one occasion the basket in a moment of confusion followed the little blossoms into the audience. It too, was received with spirit.

Before she would do the repeat, her already overworked accompanist, Cosmé McMoon, had to pass among the jubilant groundlings and retrieve the prop buds and basket. The enthusiasm of the audience at this point reached a peak that beggars description.' Florence reminds me here of another hero of mine, Robert 'Romeo' Coates, recognised as the worst actor ever to grace the world's stage: a man who so enjoyed Romeo's death scene that he would play it again and again. And again.

After an accident involving a taxi in 1943 Florence was thrilled to discover that she could sing "a higher F than ever before." Instead of suing the taxi company she sent the driver a box of expensive cigars as a thank you. One year later, at the ripe old age of 76, she performed at Carnegie Hall. So great was the demand for tickets that the event sold out weeks in advance. Jenkins died a month later at the Hotel Seymour in Manhattan. Some naysayers would later claim that her death was the result of a broken heart, however the critic Robert Bagar wrote in the New York World-Telegram: "She was exceedingly happy in her work. It is a pity so few artists are. And the happiness was communicated as if by magic to her hearers."

Here, for you delectation, is the hysterically brilliant Like A Bird, one of the few existing pieces co-authored, with Cosmé McMoon, by Florence Foster Jenkins herself. Enjoy! 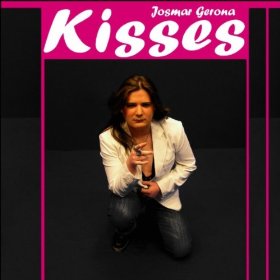 Welcome to the mad, mad world of Josmar Gerona, a peculiar, androgynous Spaniard born in 1975 and troubling Mediterranean TV audiences since the mid-90s.
A precocious child, by the age of 12 young Josmar knew that he was to dedicate his life to this business we call 'show'. By 16 he was presenting his own programme on a local radio station and within two years he had moved on to regional TV, working as a technician at Television Costa Brava.

He first came to prominence when performing as a singer on Semaphore, a nationally-televised programme from Spanish broadcaster TVE and before long Josmar was popping up all over the place, his highly animated performances becoming a highlight of early evening television. After all, what self respecting Spaniard wouldn't want to nibble on their tapas whilst watching a hulking great bloke prance around a TV studio dressed in litle more than a fringed leather jacket and a swimming costume? Unsurprisingly the raven haired, scantily dressed chubbette started to attract the attention of record producers, releasing his first single, Black and White, in 1998.

Since then Josmar has split his time between his nightclub act (Divine would have been proud), radio and TV appearances, and has continued to release the occasional record, including Spanish camp classics Hot Boy and Girls. The Hot Boy video has to be seen to be believed: Josmar eats yogurt out of a Tupperwear box before cavorting on his (sadly) single bed with a toy rabbit, undressing and enjoying a bubble bath. It's like something out of an Almodovar movie. A failed Eurovision attempt notwithstanding, Josmar is still at it today, probably prancing around a Spanish stage as I type this.

Today I present to you one of Josmar's recent forays into the world of music, Kisses, along with the truly awesome Hot Boy video. Enjoy! 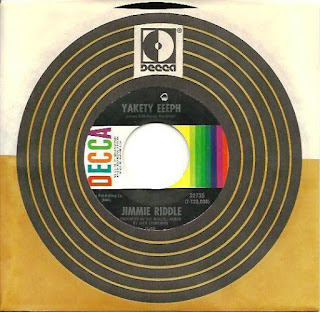 I don't usually post 'novelty' records here, as you well know, but I'm going to make a rare exception for this particular 45, one of the very few instances of a US hit record featuring the peculiar eeephing (or eefing) art form.

Jimmie Riddle (sometimes listed as Jimmy Riddle) was an American performer who found fame of the US television show Hee Haw, a kind of redneck version of Rowan and Martin's Laugh-in, which ran from 1969 until 1997 - a total of 585 one hour episodes.

Jimmie was born in Tennessee in 1913 and by the age of 16 was already performing locally. He moved to Texas in 1939, joining country singer Roy Acuff's group in 1943 as harmonica and piano man. Jimmie had his first taste of chart success in 1963 when he was featured on Joe Perkins' minor hit Little Eeefin' Annie, but it wasn't until the first episode of Hee Haw aired that he gained national recognition, forming a duo, the Hambone Brothers, with guitarist Jackie Phelps - 'hamboning' for those not in the know, is a rhythmic slapping of the thigh. To listen to Jimmie explaining how to make the kind of hiccoughing, rhythmic wheeze you need to eeeph go to http://youtu.be/75qIdhCO2DQ

Within a year Jimmie has released his first, and only, solo hit single: Yakety Eeeph (which many of you will recognise as Yakety Sax, the Benny Hill Show chase music) and its b-side Wildwood Eeeph, both tracks featured below. In the early 1980s he joined Boxcar Willie's touring band, again as a harmonica player.

Jimmie died in Nashville in 1982, but his legacy lives on: as Lurleen Lumpkin's father would attest.

I understand that some of you have been having problems downloading tracks posted here at the World's Worst Records. That was because too many people wanted to share in my love of audio atrocities and I kept exceeding the free download limit. Well, I've shelled out a few bucks (it's an American company, so forgive me but I genuinely did pay in dollars rather than pounds) and upgraded my Divshare account, so you should now be able to download to your heart's content.

Simply click on the Divshare or Kadco logo on the right of the embedded player and you should be taken straight to the download page for that track. Let me know if you're still having problems and I'll get on the case.