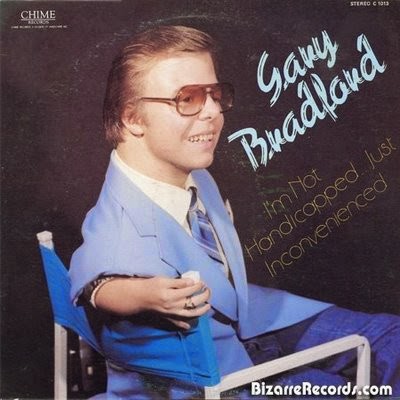 It had to happen.

Gary Bradford is one of those names that turns up again and again in lists of the world’s worst record covers, however very few people have actually heard the content of those infamous sleeves – until now!

Gary Bradford issued at least five albums – Sings for You and You and You (1975, as Gary Dee Bradford), I’m Not Handicapped – Just Inconvenienced, I Am Loved (1979), Hymns for You (1980) and his most recent effort, 2002’s Safely Home. There have also been a couple of 45s. According to his official biography, Gary was ‘born without arms and having hands at his shoulders from birth’. This rare congenital disorder is known as phocomelia: Gary’s twin brother, similarly handicapped, died in infancy. He also suffers from rickets, the predominant cause of which is vitamin D deficiency. The majority of cases occur in children suffering from severe malnutrition in Third World countries, usually resulting from famine or starvation during the early stages of childhood.

Although many factors can cause phocomelia, tens of thousands of cases worldwide came from the use of the drug thalidomide in the 1960s. Phocomelia can result in abnormalities to the face, limbs, ears, nose, vessels and many other parts of the body. If he had been born a few decades earlier he could have followed the career trajectory of Stanislaus Berent (1901  – 1980), the American sideshow freak who performed under the stage name of Sealo the Seal Boy, but brave little Gary wasn’t going to let a massively debilitating handicap ruin his life. He went on to a career as a musical minister (and, clearly, occasional ventriloquist), touring the US and giving performances at churches and conventions. He has performed at the Southern Baptist Convention, with Jim & Tammy Faye Bakker's Heritage USA, and on the Trinity Broadcasting Network.

In 2006 Gary was in the news for suing the University of Houston for violation of the Americans with Disabilities Act over a professor's refusal to provide assistance taking notes. As a result, he was forced to drop out just hours shy of his music degree. The lawsuit was one of 16 filed by the Texas Civil Rights Project accusing the government and private companies of failing to comply with the 1990 Americans with Disabilities Act. Gary had enrolled at the university because he wanted to complete about 20 hours of course work needed for a bachelor's in music. You have got to admire his tenacity and stoicism.

As far as I am aware Gary only employs his dubious ventriloquism skills on I’m Not Handicapped – Just Inconvenienced. What I can’t understand is why bother in the first place? He’s just rotten: Danny’s ‘joke’ about a Deacon and a Pastor (at least I think that’s what it is about) is unintelligible. Clearly not having fully developed arms is a major inconvenience to a ventriloquist – but Gary is in a recording studio, not appearing live from the altar of a church. He could ‘pretend’ to be controlling little Danny the wooden wonder boy rather than struggling to talk through gritted teeth mispronouncing almost every word and sounding like Chuck and Bob from the classic 70s/80s comedy Soap. Mind, Gary’s own diction isn’t exactly spot on: I swear at around 1:38 he sings the line ‘’cause I can sure handle the cocksucker way’. Surely not?

Still, who am I to judge? Here’s the opening track from Gary’s 1979 classic I’m Not Handicapped – Just Inconvenienced. Thanks to bizarrerecords.com for the cover art