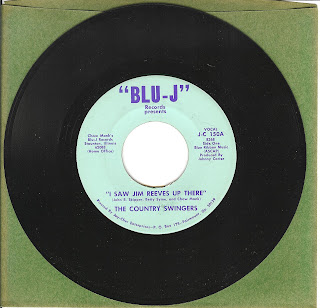 More song-poem lunacy; it's a bottomless pit I'm mining here!
I don't know where to start. Is it the virtually comatose singer, the horrendously out of tune stringed instrument plinking away (what is that? An autoharp? A toy steel guitar?) or the shoddy production values that make this such a corker?
Found and purchased recently on eBay during one of my (seemingly endless, often fruitless and occasionally pointless) searches for more song-poem releases, I Saw Jim Reeves Up There appeared on Blu-J records some time in the early/mid 60's I'd guess: Gentleman Jim died in '64, and I would assume that this arrived not long after.
I've been unable to find out anything about the Country Swingers. There are literally dozens of groups out there with the same name and I feel it's safe to assume that the epithet was applied to a bunch of session musos rather than a touring outfit. However Chaw Mank, a name splashed all over the label, is another matter altogether.
Charles "Chaw" Mank Jr. was a songwriter, band leader, silent movie organist, radio host, psychic and fan club operator amongst other things. He was also the co-author of Valentino, the book which inspired the Rudolf Nureyev movie. Oh, and he was a song-poem pioneer too!
Born in Staunton, Illinois (where Blu-J Records was later based), he served as pianist in the Fred Weidner Orchestra, later starting his own group, Chaw Mank's Blue Ribbon Dance Band, who cut several of their own records. He was a prolific songwriter, one of his biggest hits bring Bringing Mary Home, co-written with Joe Kingston and John Duffey and subsequently recorded by the Country Gentlemen, Red Sovine and Ricky Skaggs.
You can read more about his incredible life at:
http://scififantasyfilms.suite101.com/article.cfm/songwritersuper_movie_fan_chaw_mank
But, for now, all we're interested in is his time spent running the Blu-J company, part, it appears, of a much larger outfit Jay-Cher Enterprises of Georgia and affiliated with song-shark supremos Globe Recording Studios (the home of the great Sammy Marshall). It's from that period that we present, for your enjoyment I Saw Jim Reeves Up There.
http://rapidshare.com/files/186448719/I_Saw_Jim_Reeves_Up_There.mp3
Posted by Darryl W. Bullock at 09:16 3 comments: 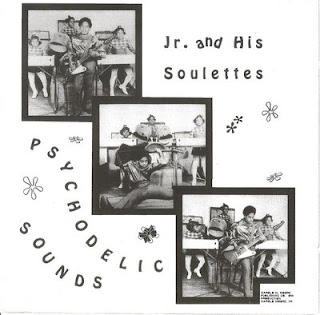 I can't express the delight on receiving a copy of this hard-to-find gem in the post shortly before Christmas. I've had an MP3 version for a while, but a few years back a small Spanish outfit, Vampi Soul, saw fit to make it available once more (although I doubt if any of the artists involved have seen a peseta!). Apparently only a few of the original 300 or so vinyl pressings of the oddly (or simply dyslexically)-titled Psychodelic Sounds made it out of the box, most having been ruined (legend has it) because they were shrinkwrapped at a meat processing factory!

Released on a private imprint in 1971, Jr and his Soulettes consisted of singer, guitarist and lyricist Harold Moore, Jr. (age 10), aided and abetted by his sisters Vinita Marie (9) on bass and organ, Denise Marshall (7) on drums, and Jacqueln Carol (6) on waw-waw (sic) organ.

It's a truly wonderful album, well worth seeking out. Think the Jackson Five meet Jimi Hendrix, played by the Mini-Pops. That they didn't go on to achieve the mega success of Michael and his brothers is a crime; obviously the US charts were not ready for Oklahoma's own heavily-fuzzed funksters, but when the kids let loose they really can cut it.

Of the 14 tracks on the album the instrumentals are surprisingly good. However, the vocal cuts (as typified in the track I've chosen for you here, the wondrous Momma, Love Tequila) are awful and - in so far as this blog is concerned - worth the price of admission alone. 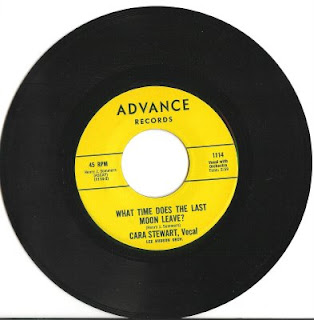 Apologies for those of you expecting the promised 'Best of...', before Christmas, but life kind of got in the way a bit. It'll come soon!
Mmmm..what time does the last moon leave? What a question.

It's another gem from the incomparable Cara Stewart. Yes, that's right - she managed to keep going, even after the ignominy of Song of the Burmese Land. This corker, another awesome song-poem (and one which, so far, appears to have escaped the CD compilers), stems from the pen of Henry J Sommers - who also wrote the lyrics to the a-side My Ladder of Dreams. It was released to an unsuspecting world in early 1971 on Advance Records, a moniker chosen by a number of different companies at different times although this particular one hailed from Yucca Street in Hollywood, just a few doors away from the one-time home of one of the greatest of all the song-poem labels, Preview.
It's worth noting the record's credit: Cara Stewart, Vocal, Lee Hudson Orch. Hudson advertised the availability of his 'orchestra' - Hudson's guitar and an orchestra simulated on a Chamberlin a la Rodd Keith but without Keith's bonkers originality - from as little as $16.75 (formerly $26!) in the back of many magazines in the early 60s. Although Hudson never owned a label himself, his productions - accompanied by the 'warm voice of Cara Stewart' - appeared on over a dozen imprints through the 60s and into 1971, when Hudson retired to San Francisco and closed up shop for good.
Enjoy!
http://rapidshare.com/files/178995253/What_Time_Does_the_Last_Moon_Leave.mp3
For more information on Lee Hudson, check out http://www.songpoemmusic.com/labels/leehudson.htm
Posted by Darryl W. Bullock at 12:18 1 comment: