Whatever Happened to Eddie? 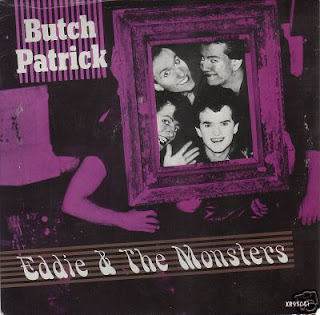 My obsession with song-poems can take a back seat today (although I'm now working on a feature for Record Collector magazine about the subject, so expect to hear a few more shockers over the next couple of months) for a little ditty I uncovered a while back but had all but forgotten.


Today I present for you both sides of Butch Patrick's 1983 waxing What Ever Happened to Eddie/Little Monsters. No doubt you'll remember Butch as the cute as a button mini werewolf son of a Frankenstein monster and female vampire (vampiresse? Who cares? I'm still trying to fathom the fuzzy logic of how a green, seven-foot jigsaw of a man sired a werewolf!) in hit 60's TV comedy the Munsters. TV trivia fans might also like to note that Butch made endless other appearances during the 60s, in episodes of The Monkees, I Dream of Jeannie, Mr Ed and as the voice of Milo in The Phantom Tollbooth. This, incidentally, wasa not his first relesae: in the early 70s he recorded a cover of the Bee Gees song I-O-I-O.


Like many kid actors, Butch struggled to find work once he'd hit puberty and made sod all from the endless re-runs of his finest half-hour (unless you count his one-off appearance in The Simpsons), hence this one-off shot at vinyl stardom; a schlocky, synth-driven pile of predictability based on the theme to the hit show (and released on Rocshire Records) which the gangly former moppet co-wrote and on which he's accompanied by terrible new wave band The Monsters.


Apparently Butch  recorded a further single - It's Only Halloween - which was written by Bill and Ted Golis and released on Park Lane Drive Records in 2007. If his outing here is anything to go by it's got to be worth tracking down.

Email ThisBlogThis!Share to TwitterShare to FacebookShare to Pinterest
Labels: Butch Patrick, the Monkees, the Munsters, Whatever Happened to Eddie, worlds worst records