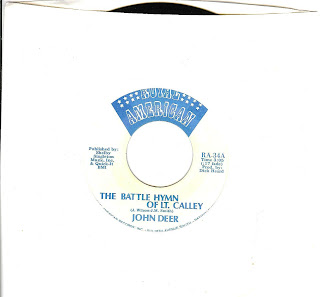 A special post this week, a three-for-one offer just for you in celebration of the notorious American war criminal Lieutenant William Calley, the army officer found guilty of ordering the My Lai Massacre on March 16, 1968, during the Vietnam War. Exactly the right sort of subject for a hit single or two, surely?

Or three. For today's selection not only features an execrable rewrite of John Brown's Body in that dreadful Staff Sergeant Barry Sadler style, but two song-poems from the Preview stable, both performed by the always reliable Gene Marshall (aka John Muir, real name Gene Merlino).

The John Deer recording on Royal American is particularly interesting because it is, in fact, a cover version of a single released in 1971 by the group C-Company Featuring Terry Nelson (an Alabama-based radio DJ), which sold over two million copies and hit number 37 on the US Billboard charts. Unsurprisingly, neither of the Gene Marshall recordings troubled the charts.

I love the way in which the songwriters have tried to create a folk hereo out of this man - if you don't know the Calley story, you can read all about it here, including the tale of the revolting man's feeble attempts to con money out of the British media, but for now enjoy!

The Ballad of Lt William Calley:

The Story of William Calley: