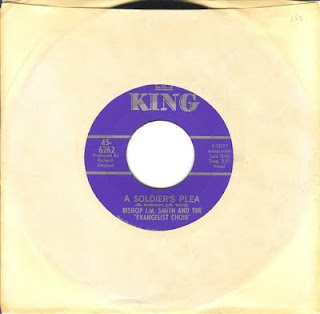 Another horror from the Father Pat Berkery school of 60s spoken-word gospel nonsense; A Soldier's Plea, which appeared on King records in the US in 1969, is yet another of those godawful anti- and/or pro-Vietnam waxings that America was so keen on. Clearly it was easier for the country to listen to this rubbish than face the reality of that particular senseless waste of human life.

This execrable garbage is credited to Bishop J M Smith and the "Evangelist Choir" (their speech marks, not mine), who released at least one further 45 on King, God Is Already Here c/w Step Out On Faith and an album, also called A Soldier's Plea (some copies appear to be credited simply to the Smith Evangelist Choir), both in 1970. Born in 1933 and based in Greenville, South Carolina, Bishop Johnnie Smith has had a long, distinguished career: according to his biography he was the first black man ever to be elected to a state office in the Republican Party, becoming second vice chair of the state in 1989, and in 1997 was awarded the Order of the Palmetto, the highest award available to a civilian in South Carolina. The Bishop, ever the philanthropist, also set up the Johnnie Smith Ministries, an Evangelistic Temple foundation.

All sounds great, doesn't it? Unfortunately the good Bishop has been a bit of a naughty boy of late and, under his full name of Johnnie Morris Smith (please, no jokes about zookeepers and talking Bristolian elephants) he's listed as a registered sex offender, having been found guilty of statutory rape - making the beast with two backs with a girl of 13 - in 2005. How very Jonathan King.

Still, I hope the Bishop's sexual pecadillos do not spoil your enjoyment of the terrifically turgid A Soldier's Plea