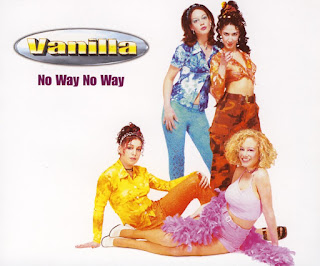 Rumours persist that the ‘group’ responsible for today’s atrocity were put together by someone within the music industry as a joke, and that two A&R men bet each other that they could get the worst song imaginable to number one. Well, I ain’t laughing.

Possibly the homeliest foursome ever to trouble Saturday morning TV, Vanilla was a girl group from Barnet, London consisting of sisters Frances and Alison Potter, plus their friends Alida Swart and Sharon Selby. Releasing just two singles for EMI in 1997 and 1998, it is the first of these we feature today.

No Way No Way reached the dizzying heights of number 14 in the UK Singles Chart. Based on the late Italian film composer Piero Umiliani's one-off novelty hit Mah Nà Mah Nà (later popularised by the Muppets and by its inclusion in many Benny Hill episodes), the video which accompanied the single (filmed, incidentally, in Brockwell Lido – not Charlton as claimed by Wikipedia) won the dubious title of Worst Music Video Ever on the 1997 ITV Chart Show end-of-year special. The song itself was voted number 26 on Channel 4's 100 Worst Pop Records.

Pretty much forgotten now, the band was just one of a plethora of appalling girl combos put together in the rush to find a second Spice Girls. One can imagine how it went in the planning meeting: “We need another ‘zig-a-zig-ahhh’!” “What about ‘mah-na-mah-na’? It sounds a bit similar; it’s got the same number of syllables.” “Perfect: gold discs all round!”

The follow-up, True to Us, managed to scrape in at 36 in the UK charts: the foursome failed to release any further singles, were dropped by their company and quietly disbanded.

Email ThisBlogThis!Share to TwitterShare to FacebookShare to Pinterest
Labels: No Way No Way, Vanilla