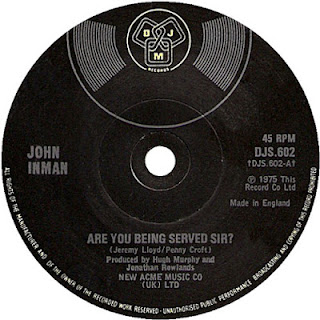 This is the sort of record that makes me want to go out and kill someone.

Running for 13 years, Are You Being Served? Was a British sitcom set in the clothing department of Grace Brothers, a fictional London department store. 69 episodes (and a God awful film) were produced over the years, and there were even a couple of series of a sequel in the 1980s, Grace & Favour.

The show was known for is saucy, seaside-postcard style double entendres and for its cast of sitcom stereotypes: the sex crazed young man, the pompous middle-aged ex-army type, the air-headed blonde, the prudish battle-axe and the camp-as-Christmas mincing Mr Wilberforce Claybourne Humphries, just one of the many disgusting and disturbing gay caricatures that populated our television screens in the 1970s.

During its run, the series attracted criticism for its endless reliance on sexual stereotypes and double entendres, the stupid ‘jokes’ about Mrs Slocombe's "pussy" and John Inman's portrayal of Mr Humphries as the most effeminate man you were ever likely to meet. Inman pointed out that Mr Humphries' true sexual orientation was never stated in the series, and co-creator David Croft said that the character was "just a mother's boy", yet throughout the show’s run he made his attraction to other men obvious and used every stereotypical gay characteristic you could imagine.

Not because the actor who played him refused to discuss his sexuality for decades (he finally came ‘out’ and had a Civil Partnership with his partner of 33 years, Ron Lynch, in 2005, less than 14 months before he died), but because for a boy growing up in the 70s struggling to come to terms with his own sexuality there were no positive gay role models anywhere, just a procession of pansies which minced their way through our living rooms each evening on TV. Everywhere you looked there were people like John Inman, Larry Grayson or Danny La Rue but not one real man who also happened to be homosexual. These people should have been helping people understand and accept gay men, not pushing back the gay liberation movement decades.

I also hate him for this, a spin-off single released in 1975. Written by the show’s other co-creator Jeremy Lloyd along with David Croft’s daughter Penny, I could transcribe the lyrics for you but I’m afraid my computer would explode from the overload of campery. Inman went on to make several other records – including a vile version of the standard the Teddy Bear’s Picnic – but nothing quite plumbs the depths of this piece of crap.

Email ThisBlogThis!Share to TwitterShare to FacebookShare to Pinterest
Labels: Are You being Served Sir?, Are You Being Served?, John Inman, singing actors