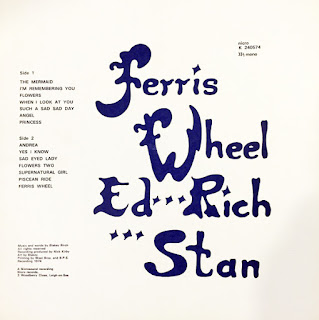 Some time in the not-too-distant past, an anonymous record collector stumbled upon what is reported to be the only copy of this tosh. Sharing it around the net, it was (unsurprisingly) picked up, re-ordered and reissued in a new sleeve in 2002, almost 30 years after it was originally recorded. As often happens, certain lovers of the perverse decided that this was a great lost work of lo-fi loveliness, and feted it as the UK's ‘rarest 70's esoteric stoner-folk album’. Since then people have been raving about how great this is.

Well, I have a surprise for you: it’s not great at all. Supernatural Girl by Ferris Wheel is not a great folk-psych masterpiece, it is inept, badly-played and poorly recorded hokum.

Seemingly the only record issued on the Nicro label (part of Nicrosound, of Essex costal resort Leigh-on-Sea), the three-piece Ferris Wheel (Ed, Rich and Stan) sound like a parody of bad folk musicians. You could easily believe that this is the only album owned by the Flight of the Conchords, or that this was the record that Ralfe Band were trying to emulate when they made the sublime and wonderful Swords, but seriously – it’s dreadful. That said, it does have a certain naïve charm.

The songs, written and copyrighted by the otherwise unknown Blakey Burch (as credited on the label: on the original front cover his/her surname is spelled Birch) and produced (ha!) by Nick Kirby, are outrageously amateur: When I look at you/I know you’ll be true/And I will not be blue… and Piscean Ride is easily one of the most awful things that I have ever had to endure. The guitar and bass remind me of the (virtually) unlistenable Beatles/Stu Sutcliffe Cavern rehearsals, it’s that bad. The Mermaid – on which our trio don their skiffle shoes – is dire, and the guitar playing on I’m Rembering You is truly execrable.

Although the Ferris Wheel and Birch/Burch are entirely unknown, Kirby is someone we do know something about: a DJ on Radio Sutch, a short-lived 1964 pirate station in the Thames Estuary fronted by our very own Screaming Lord Sutch, Nick was born in 1944. Originally blind, groundbreaking eye surgery in his pre-teen years restored some sight although, sadly, his eyesight failed completely in later years. Nicrosound was his company: specialising in jazz, Nicrosound also put out tapes by Digby Fairweather and the Les Page Dixieland Band. Nick sadly passed away in 1994 from a brain haemorrhage. You can find out more about him and his pirate radio career here.

Described as ‘timeless, downer-style electric folk brimming with tension and despair’, you can find the whole album on YouTube, but here’s a taster – three tracks from the otherworldly Supernatural Girl.

Thanks to Discogs for the image of the original cover
Posted by Darryl W. Bullock at 08:01