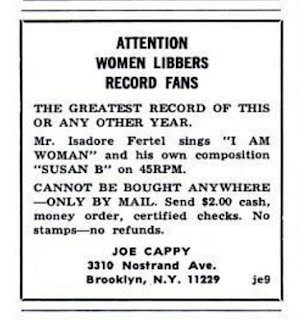 Born in December 1936, Isadore Fertel (pronounced Fur-Tell) was rapidly approaching his forties when he struck up his on-off friendship with the man who would become his mentor, champion and producer - Herbert Khaury, aka Tiny Tim.

After Tim’s career hit the skids – and after he was dropped by Reprise for failing to promote his own records and constantly criticising the company in interviews - he tried to start his own company, issuing several singles on Vic-Tim (acidly named after Tiny and his then-wife, Miss Vicki and distributed by song-poem shysters Brite Star) before setting up a second imprint which he named Toilet Records ‘because that’s where my career was going’. Toilet Records had a slogan – ‘sit and listen’. For his new label he set out to find new talent, although Tiny ended up signing just one other artist, the equally eccentric Mister Fertel.

Izzy Fertel was a short (and short sighted) Jewish man who claimed to be the only male member of a local Women’s Lib organisation (the Radical Feminists) and who performed a Yiddish version of Rock around the Clock as part of his repertoire. Fertel, whose greatest wish was to have a sex-change operation, had been married although that was only consummated once, and even then under the supervision of his sister-in-law. His wife’s family clearly indulged him: ‘On Father’s Day,’ he once revealed, ‘As a treat her Mother would get me a dress, do my nails and make me up.’

Known within his family as Izzy, according to his cousin Randy (in his book The Gorilla Man and the Empress of Steak: A New Orleans Family Memoir) he ‘swore to his dying day’ that he went to a women’s college. That wasn’t true: he went to Loyola University, a mixed sex establishment in Chicago (he served on the university’s Social Service committee for the year 1959-60), but who cares?

Izzy recorded two tracks for Tiny’s Toilet Records – A cover of Helen Reddy’s I Am Woman and his own composition Susan B, a tribute to the social reformer and feminist Susan B. Anthony, who played a pivotal role in the women's suffrage movement. ‘The most important thing I did as head of Toilet Records was discover a new talent – Isadore Fertel,” Tiny once admitted. ‘I paid him $100 to cut two songs for me.’

It’s long been believed that the 45 (which was given the catalogue number RB-102, and was produced by Tiny under the lurid nom de plume Ophelia Pratt) was never actually pressed, but it was certainly offered up for sale: it was advertised as available via mail order in five consecutive issues of Billboard magazine over May/June 1973. The Joe Cappy mentioned in the ad (above) was Tiny’s erstwhile mobster manager Joseph Cappelluzzo: Joe had been Tiny's best man when he married Miss Vicki on Johnny Carson's Tonight show. Quite what anyone who actually received a copy of the record would have made of it is anyone’s guess: Izzy’s lispy, nasal and atonal voice is accompanied by solo piano, and both tracks sound like they were nailed in one solitary take.

According to Tiny’s biographer Justin Martell, Fertel ‘hoped to make enough money in show business to get a sex change. Tiny Tim met Isadore Fertel in the early 1970's and was “impressed with his songwriting.” Tiny featured Fertel as his opening act at many shows and promoted Fertel with what resources he was able to muster during that period’.

Izzy Fertel has been described by others as ‘Tiny Tim’s Tiny Tim’. So in awe of Tiny was he that Izzy attempted to follow in Tiny’s footsteps, getting a job as a messenger boy (Tiny had worked as a messenger boy for Loews/Metro-Goldwyn-Mayer in the 50s) and taking the occasional gig on the amateur circuit. As eccentric as his mentor, Izzy is reported to have been obsessed with winter weather, and would move around from state to state in search of snow. He also is said to have occasionally performed dressed as a woman, calling himself Isadora. As he once said: ‘If I were a woman – and how I wish I were – I’d probably be a lesbian’.

Tiny can be seen on YouTube, accompanying Izzy on the New York cable TV chat show Coca Crystal on Susan B and on his later composition, The Reagan-Begin Song. Although the two were clearly close, as an avowed feminist Izzy found it hard to accept Tiny’s 19th century views on women, and after he encouraged Miss Vicky (along with their daughter, Tulip) to leave Tiny the two men did not speak for a year.

The colourful Isadore Fertel died on September 9, 2008 at a retirement home in the Bronx, New York.