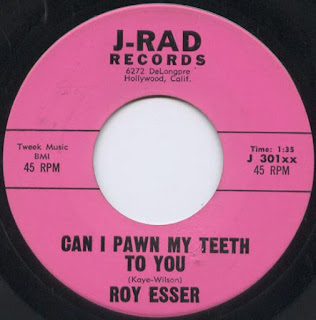 Search the Internet for as long as you like, but you’ll discover that very little – make that absolutely nothing – about Roy Esser, the ‘unusual’ vocalist on these two tracks. Issued as a 7” on J-Rad Records of Hollywood at some point in the early 60s. In fact the disc - Can I Pawn My Teeth to You/Man Do I Like Friday - would have been forgotten if not for Dr Demento, who featured the b-side on his radio show back in 1981, or for fellow blogger and obscure music enthusiast Bob Purse, who posted both sides of the 45 at WFMU’s now inactive Beware of the Blog back in 2008. Thank you gentlemen!

Although I can find no information about Mr Esser, what is obvious is that the recordings I present for you today are somehow related to Sandy Stanton’s Film City set up. The clues are all there if you start to dig around. First of all there’s Stanton’s signature Chamberlin sound: Stanton promoted the primitive, mellotron-esque keyboard instrument and most of his records are swathed in the stuff. Then there’s the fact that both of the songs were published by Tweek Music, which appears to have been one of the many publishing companies owned by Ronald Solovay. Ron Solovay was an associate of Stanton who had also written and recorded for Stanton’s Action and Abbey labels.

Then there’s the address on the label, 6272 De Longpre Avenue, Hollywood: another important clue to this disc’s origin. In 1958 this was home to the Ruskin Export Company, and over the next few decades this nondescript little office block would house the Vine Medical Group, drinks importer Spirits of the World, and a number of doctors and dentists. However by the mid-60s J-Rad’s address was also the home of the Teron Recording Studio and record label. Teron, which had previously been at 1156 North Highland Avenue, Hollywood where they boasted of their complete tape and disc service and ‘major record company contacts’, was part owned by Ron Solovay. He’s the ‘Ron’ in TeRON: the TE was his business partner (at that time) Terry Dunavan.

All of which means that the Chamberlin player on these recordings is almost definitely Rodd Keith, who was recording for Stanton at that time under the pseudonym Rod Rogers. Yet to my ear the tracks don’t quite demonstrate Rodd’s usual flair, so I assumed that it’s m ore likely to be that player could be Stanton himself. It’s impossible to know for sure.

What we do know is that Dunavan and Solovay wrote and produced many tracks together over the years, usually working with a lyricist, and Dunavan had previously enjoyed a career as a rockabilly guitarist, releasing the incendiary (and these days very expensive) 45 Earthquake Boogie/Rocket to Mars on Fanfare Records in 1958 and other cuts on Devco. According to IMDB Dunavan appeared in the John Forsythe sitcom Batchelor Father in 1957; he was also one of the engineers on Jennifer Warnes’ Famous Blue Raincoat album (1987), having previously worked as an engineer for Frank Zappa on Over-Nite Sensation (1973) and Apostrophe (') (1974). He passed away in 1989 aged just 49.

‘Yes, Leigh Crizoe and Ron Solovay are the same person: Me,’ the affable and approachable Mr Crizoe confirms. ‘That was actually recorded in 1963, and it was me who played the Chamberlain on that horrible record!

‘Back in 1963 Terry Dunavan and I were two young musicians who bought an old Magnacord recorder and opened up a small studio in Hollywood on a shoestring. My brother, who was in high school, built us a makeshift mixer that actually worked. We put ads in the newspaper to get clients.

‘Roy Esser came to our studio and wanted to put out a record of Can I Pawn My Teeth to You. It was the era of Tiny Tim, who (would go on to sell) millions of records being terrible. Roy paid us to have the record recorded and pressed up. Sandy Stanton, who I had worked for when I was in High School and for a time after, had a Chamberlin. I was one of the first people to play it, even before Rodd Keith.’

So now you know. The timeline could be a little out: Tiny Tim would not find fame for several years and Teron was registered at the DeLongpre address until at least 1967, but otherwise it all fits (apart from Leigh's assertion that Tim was terrible!)  A little further research has revealed just one Roy Esser living in California at that time: Roy H. Esser died, in Hawthorne, Los Angeles County, on January 1, 1979 six weeks short of his 67th birthday and just over three years after he suffered a heart attack. If this is (well, was) our Roy then he would have been 41 when Leigh says the recordings were made.

Still active today, Leigh Crizoe has written and produced hundreds of jingles for radio and television commercials including Nobody Beats the Wiz for The Wiz Electronic Stores in NYC, which later became the basis for Nobody Beats the Biz recorded by Biz Markie (since sampled by NAS). Leigh also wrote the famous You’ve Got the Look, the Jordache Look designer jean commercials. His music has also been featured on Seinfeld, Saturday Night Live; more recently he’s been working as a radio presenter for NYTalkRadio.net, co-hosting a series with his partner Rhio on raw food and veganism.

Anyway, here are both sides of Roy Esser's solitary 45, Can I Pawn My Teeth to You/Man Do I Like Friday.