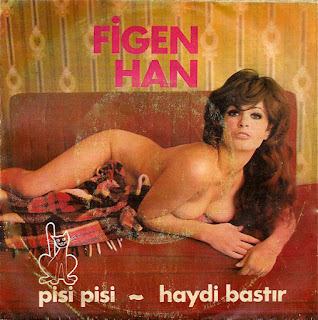 Turkish adult film actress Figen Han, born Nevval Karpuz in February 1950, appeared in 73 movies – many of them insane sex comedies - between 1966 and 1983. Known as (literally ‘sex fury’) these films have such wonderful titles as The Cruel Also Love, First Love Then Kill, Crazy But Sweet, Warm Lips and my personal favourite, Perversion Death Terminator. These Italian-inspired softcore comedies were big business in Turkey, and the Seks Furyasi genre would remain a favourite with audiences until the 1980 coup, after which the government strictly prohibited graphic sex in the cinema.

The real-life sex kitten likes cats – as you can probably tell from the noises she makes on the a-side of this thoroughly bizarre record, Pisi Pisi (Kitty Kitty), issued in 1977 when she was at the height of her fame. The B-side, Haydi Bastir is virtually instrumental, apart from our Figen whispering ‘Haydi Bastir’ every 30 seconds or so. Figen also appeared in a film of the same name in 1977, so it’s a fairly safe assumption that this was used as the theme tune. For some peculiar reason the ‘song’ appears on the disc’s label as Haydi Bastirrr. The movie itself is unwatchable soft porn nonsense: it’s available to stream on Daily Motion – sadly with the opening and end credits lopped off - if you’re so inclined, but I'd be very wary about Googling Figen Han and 'Turkish sex movies' if I were you. Some of the results are definitely NSFW!

Up to date info on Figen is scarce, but apparently she has retired from acting and currently lives in a basement flat in Sisli, Istanbul with her many, many cats.

Here are both sides of Figen's rare, one-off 7". Apologies for the quality, but mint copies sell for around $80-$100 these days.