It's Time To Swing 'n' Slim 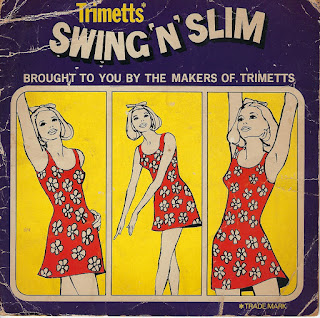 Trimettes, which enjoyed their heyday around 1963/64 were biscuits, available in three flavours, lemon & Chocolate, Orange or Cheese, which dieters were expected to use as a meal replacement – a proto Slim Fast bar, if you like. They came in packs of 12, which represented three meals: it was suggested by the manufacturers that for rapid weight loss you replace every meal with your four biscuit allowance and a glass of milk and, one you had achieved the desired weight, you could then maintain your figure by replacing just one meal a day with Trimettes biscuits.

Established to compete in the burgeoning slimmer’s market with Limmits, a similar meal replacement biscuit that had been around since the middle of 1961, Trimettes were manufactured by Universal Laboratories of Folkestone, Kent, who also made Daxaids, an indigestion medicine, Soothe chilblain cream, and Dascote cold and flu remedy as well as countless other ‘over the counter’ medicines. 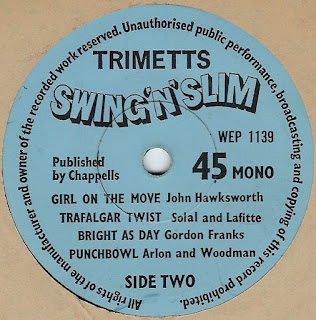 Not exactly sensible, the biscuits’ main ingredient was sodium carboxymethyl cellulose, a thickener derived from wood pulp that is still used today in diet foods and in everything from paint to laundry detergent. Yum! By the early 1970s the range had increased to include fruit shortbread biscuits, chocolate fingers, lemon crisps and other tasty treats 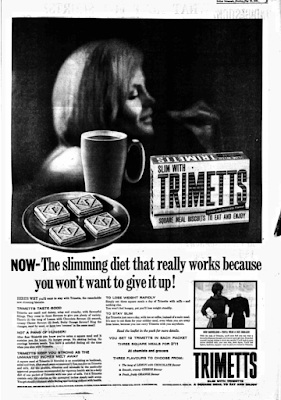 Anyway, like a lot of other slimming aid manufacturers (Energen crispbread, for example) the good people behind Trimettes decided to produce a keep fit record, to encourage their loyal customers to add a few aerobic exercises into their diet regime. Sadly the disc, which came in a groovy fold-out cover featuring illustrations and directions for each of the exercises, gives away very few clues as to who was involved, although judging from the catalogue number it's clear that it was manufactured by CBS Special Products around 1965.

I know I know the narrator’s voice, I just can’t put my finger on his name. It’s almost definitely a pirate radio DJ. But what we do know is that the fantastic background music on Trimettes Swing ‘n’ Slim came from the Chappell music library, and features such now-revered composers as John Hawksworth and Jack Dorsey.

Here are both sides of this wonderful slice of 60s kitsch. Enjoy!