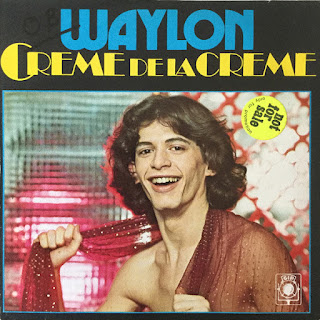 André Van der Veken, born in the Belgian city of Ninove on 19 January 1949, has had a long a varied career in the world of pop.

He first recorded under the name Andy Free, issuing a number of 45s in both Belgium and Holland during the first half of the 1970s, including Mama (Philips, 1971) and Ik Kon Mijn Ogen Niet Geloven (I Could Not Believe My Eyes, BASF, 1974). In 1978, as André Van Der Veken, he released his first full-length album Maar Zo Is't (That’s How It Is). He then moved on to a successful career as a songwriter and producer, principally with the group Dance Reaction, who issued three 45s – including the oddly titled Shanks Mare Honey and Honey Puppy Is My Name between 1981 and 1983. He continued to work throughout the 80s and 90s, with duo Leeva and Andy (guess which one he was?), D.J. Arséne, and he co-wrote both sides of the comeback single for the 60s Belgian pop band The Paramounts. In 1996 Dance Reaction’s big Euro hit, Disco Train was remixed and re-released.

Over the years he has worked with a number of Dutch and Flemish artists, including Jimmy Frey, Jo Vally, Willy Sommers and Laura Lynn, under such names as Dré Van der Veken, André Domien and Remien. But the pseudonym we’re most interested in here is Waylon, which he used for the one-off 1979 single Crème de la Crème/The Sparrow.

Crème de la Crème was the only disc Andy/André issued as Waylon, but what a record it is. A hellish mashup of Sylvester and Boney M, this ridiculously brilliant slice of disco buffoonery was released in Belgium, Holland, France, Germany and Portugal but failed to chart in any of those countries, despite being issued in both 7” and 12” formats, the latter available in both yellow and white vinyl. Over the years it has developed its own cult following, and quite rightly so. It’s a very special record.

After playing the songs on The World's Worst Records Radio Show and discussing them with listeners and fellow presenters there I decided to track down Dré Van der Veken, and was honoured when he kindly agreed to talk about the single with me.

The biggest surprise was the discovery that Waylon, the young man who appears on the sleeve of the 45, does not actually sing on the disc. “We only had the song and a nice boy who could not sing,” Dré admits. “So, I was required - poor me! - to perform the song myself. It was a laugh, believe me. We thought that the record would never make it to the market.”

When asked about the voice he used on the disc, Dré candidly admitted that “I think it was a combination of wine and too much time in the studio. Things like that happened a lot, although those times are over now. Showbiz has changed; there’s no more money for crazy things and I am getting older. Although I’m still a little crazy!

“There was never going to be a follow up to the Waylon single: it was a joke. The real Waylon went off and married his boyfriend.”

In 2013 Dré released his second full-length album, Tussen Hoogtes en Laagtes (Between the Highs and Lows), which he describes as an “active creation between man and machine ... and my cat Johnny”. The album was “recorded in the bedroom, where I operate all the keys and synths myself, sometimes just with two fingers… It had to sound the way I heard it in my head and maybe I succeeded. The arrangements and sounds, perhaps not flawless, are primarily a bed for the lyrics. These are rather dark in nature, although I do not consider myself a pessimist but rather a pessimistic optimist and bon vivant.”

He's nonplussed about the curiosity that surrounds Crème de la Crème. “I'm surprised people are still interested in the Waylon thing,” he admits. “Copies now sell for more than 30 euro, and I never saw a penny of it,” he laughs. “Maybe I have to open a bottle of wine (or more than one), compose a follow-up and find someone who can’t sing again… what you think?”

Check out both songs below. My huge thanks to Dré Van der Veken for taking the time to talk to me. You can check out his more recent music, as well as tracks from his 1978 album Maar Zo Is't, at his website: www.drevanderveken.com