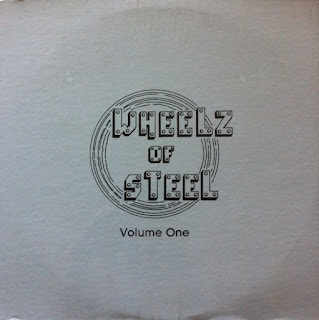 Not much is known about the two young men behind the insanely rare Wheelz of Steel Volume One, brothers Raymond and Richard Markowski of Milwaukee, Wisconsin. But what follows is what I been able to glean so far.

Born in 1961 and 1962 respectively, the brothers were born with Muscular Dystrophy, an inherited genetic condition that gradually causes the muscles to weaken, leading to an increasing level of disability. Unable to get around without assistance, the boys were not going to let their situation get the better of them, and with commendable good humour and a certain irony (and a nod, no doubt to British NWOBHM band Saxon), named their band Wheelz of Steel after the wheelchairs they were confined to.

Issued in 1983, the self-funded and self-released album features the brothers swapping guitar and bass duties, with vocals handled by Richard. Throughout they are accompanied by their trusty Roland drum machine, credited on the reverse of the sleeve as “T.R”. All eight songs were co-written by the boys themselves.

It’s a dreadful record, but you have to admire their spirit. How many of us in a similar situation would have been able to write, perform on and release our own LP? Not only that, but they even performed live, entering into a local Battle of the Bands competition and winning. Admirable stuff.

Sadly, both of the Markowski brothers are no longer with us: Raymond passed away, aged just 32, in 1993. Richard died in September 2011 aged 49 after power was lost at the Milwaukee home he shared with his mother in an overnight windstorm, cutting off the electricity supply to his ventilator. Richard’s mother, Beverly, called 911 when his ventilator started to beep, but she told emergency personnel that she had backup batteries, so they left. She called 911 again shortly afterwards because her son was struggling, and the alarm was beeping again. He later died at a hospital. According to the county medical examiner’s report, Mrs. Markowski believed that the batteries had a longer life. A sad end to a short, but accomplished, life.

Have a listen to a couple of tracks from the brilliant Wheelz of Steel Volume One here: Outerspace Man and Mad Man. If you want more, the whole thing is available on YouTube,